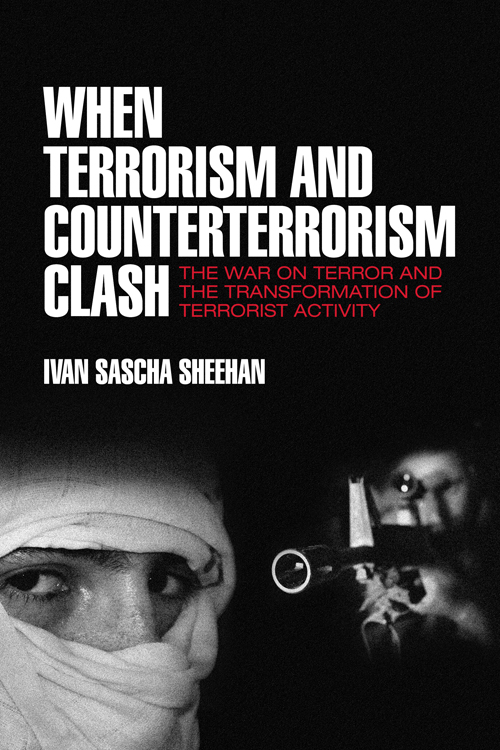 When Terrorism and Counterterrorism Clash: The War on Terror and the Transformation of Terrorist Activity by Ivan Sascha Sheehan

"This work is important because it offers both scholars and practitioners a tool to assess counterterrorism theory and practice. Recommended." - CHOICE

The impact of the Global War on Terrorism (GWOT), with its emphasis on preemptive military force, is a matter of considerable debate. This timely book employs a time series intervention approach to evaluate the extent to which the onset of the GWOT (beginning with the invasion of Afghanistan) and related events (the invasion of Iraq, the capture of Saddam Hussein, and the release of photos from Abu Ghraib) are associated with changes in transnational terrorist activity.

Utilizing an extremely sophisticated statistical analysis of longitudinal data exploring the relationship between the U.S. "Global War on Terror" (GWOT) and the frequency and lethality of acts of transnational terrorism, this study has produced some counterintuitive findings which are now compatible with official thinking.

Highly readable with a rich quantitative analysis of the largest ever terrorism database constructed for the period 1992-2004, the results of the study are fascinating and have important implications for current U.S. foreign policy in the Global War on Terrorism. The author has painstakingly examined, with precise numbers, the impact of the use of preemptive force in the War on Terrorism in a way that has never been done before.

This is the first publication showcasing compelling data on the impact of the current war on terrorism on the level, lethality and frequency of transnational terrorist activity around the globe. With extremely current data, When Terrorism and Counterterrorism Clash is a critical reference to all in the fields of international relations and political science.

"In the almost surreal post-9/11 world, where ideology and emotion have been successfully trumping science and real 'facts on the ground,' Dr. Sheehan's book represents a proverbial breath of fresh air in an otherwise politically polarized and 'closed' setting where critical thought, not to mention 'truth,' have been among the first casualties.

Dr. Sheehan's carefully crafted and empirically researched study demonstrates compellingly that, despite all the claims made to the contrary, President Bush's policies toward the 'Global War on Terror' (GWOT), including the invasion and occupation of Iraq, have actually increased the forces making for global terrorism and, paradoxically, made the world less safe.

The book should, therefore, be required reading for all those who wish to design and implement effective policies to prevent and otherwise deal with the forces making for global terrorism, including policymakers and their staffs, journalists and pundits, researchers, and politicians of all stripes." – Dennis Sandole, Professor of Conflict Resolution and International Relations, George Mason University


"This is the most compelling, provocative, and sophisticated empirical study I've seen of the Global War on Terrorism. It is essential reading for policymakers and scholars and couldn't come at a more critical time." -John N. Paden, Ph.D., Clarence Robinson Professor of International Studies and Professor of Public and International Affairs, George Mason University


“This is exactly what we need to make informed policy decisions.” – Alireza Jafarzadeh, Author of The Iran Threat: President Ahmadinejad and the Coming Nuclear Crisis and FOX News Channel Foreign Affairs Analyst


"This work is important because it offers both scholars and practitioners a tool to assess counterterrorism theory and practice. Recommended." - CHOICE

Ivan Sascha Sheehan is on the faculty of the Graduate Programs in Dispute Resolution at the University of Massachusetts Boston. He specializes in the current conflict between global terrorism and counterterrorism and is a frequent speaker on U.S. foreign policy in the Global War on Terror. Dr. Sheehan's research, based on terrorism incident data, examines the impact of preemptive force on terrorist activity and examines the implications for international conflict management. He earned his Ph.D. from George Mason University.

Professor Sheehan continues to serve as a Visiting Professor at the Institute for Conflict Analysis and Resolution where he teaches courses on international terrorism and counterterrorism. He previously taught in the International Studies Department at Bentley College.


I A World of Terrorism and Counterterrorism


Chapter 1: The Challenge of Global Terrorism

After 9/11: Preemption and Preventive War


Chapter 3: The Nature of Terrorism and Counterterrorism

What is transnational terrorism?

What is “Islamist” terrorism?

What is the War on Terrorism?


Chapter 4: The Origins of Terrorism and Counterterrorism

Insights from the Social Movement Literature

Contributions from the Conflict Literature.

Evidence from the Asymmetric War Literature.

The Problem of Transnational Terrorism


II When Terrorism and Counterterrorism Clash


Chapter 5: How Do We Measure Success?


Chapter 6: Are We Winning? The Results

Shifts in the Frequency of Incidents

Shifts in the Lethality of Incidents

Shifts in the Dispersion and Location of Incidents

Shifts in the Type of Attack

Shifts in the Type of Victim

Appendix A: Variables in Order of Appearance in Text

Appendix B: Countries Classified 50% or More Muslim in Data Set