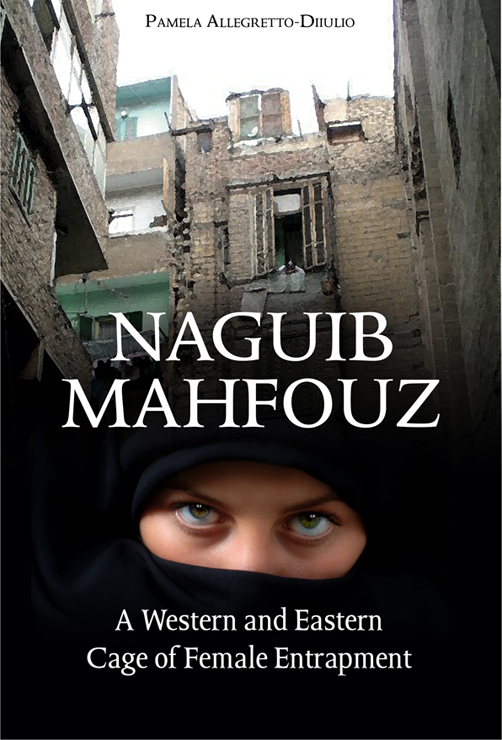 Naguib Mahfouz: A Western and Eastern Cage of Female Entrapment by Pamela Allegretto-Diiulio

" ... a monumental publication: it represents one of the first important critical studies of Mahfouz’s art—in itself a noteworthy achievement"

Generally regarded as modern Egypt’s leading literary figure, Naguib Mahfouz was the first Arabic-language author awarded the Nobel Prize in literature. Critics hail Mahfouz for his ability to capture the essence of Cairene culture and life.

This book illuminates how Naguib Mahfouz has successfully used the elements of daily life to capture the reality of his generation amidst the political upheaval caused in part by the British occupation of Egypt. This study also goes beyond opening up the Egyptian world to the reader; it is a careful analysis of the major novels of Mahfouz’s career from an ambiguous feminist perspective. The author selects the term ambiguous deliberately to signify the disparity between a Western and Islamic lens. By employing this approach, the author successfully shows how the characters are not only entrapped in cages of subservience, but also cleverly reveals how the reader of Mahfouz’s work is often entrapped in cages of misunderstanding.

As the first scholarly study on Mahfouz’s work through a highly original interdisciplinary Western and Eastern feminist lens, this book is a critical addition for collections in Literature, Middle Eastern Studies, and Women’s Studies.

“This is a very important book which acquaints the reader with a highly gifted but still relatively unknown author, Naguib Mahfouz. It analyzes some of Mahfouz’s finest writings, it provides a valuable contribution to that body of extant scholarship, but most importantly, it gives voice to the many women whose stories have not been told, whose silence has been oppressive, and whose dignity has been shattered. … This is a monumental publication: it represents one of the first important critical studies of Mahfouz’s art—in itself a noteworthy achievement—but, beyond that, the author’s courageous and penetrating analysis of these women and their suffering is conceptualized and executed on a heroic plane. This is not an esoteric read, yet another would-be scholar’s arcane peregrination into obscurantism. Far from that, Naguib Mahfouz: A Western and Eastern Cage of Female Entrapment is vast in its scope, intellectually honest in its central premise, and revelatory in its findings. This is a book that matters; this is a book that offers the reader an astute and moving examination of one of the great if under-appreciated writers of the modern era.” – Professor Ronald G. Shafer, Indiana University of Pennsylvania

Pamela Allegretto-Diiulio holds a PhD in English and Comparative Literature from Indiana University of Pennsylvania, a master’s degree in education from Edinboro University of Pennsylvania, and a bachelor’s degree in English from Clarion State University. Dr. Allegretto-Diiulio’s teaching experience includes being an assistant professor of English and Comparative Literature at the American University of Kuwait for two years; prior to that appointment, she served as the English Department chair at the Universal American School in Kuwait for five years. She has taught public speaking, composition, and a variety of literature courses, including “Arabic Literature in Translation.” She has presented her research and spoken on a variety of literary and educational topics at international conferences.


Chapter 5 - A Composite of Four Novels