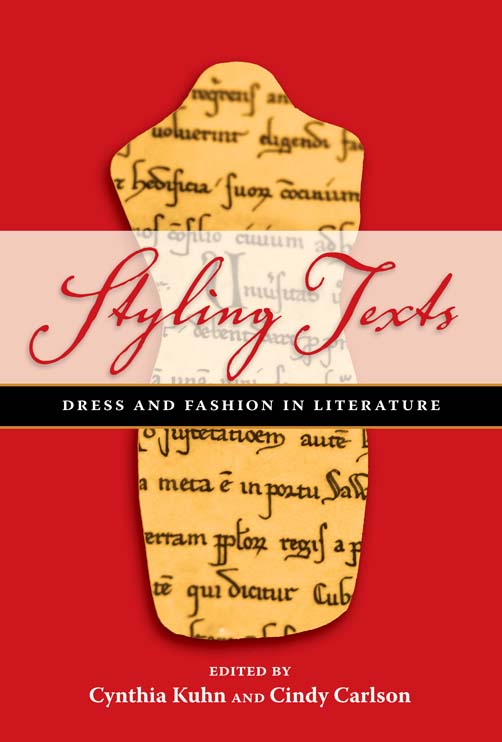 Styling Texts: Dress and Fashion in Literature by Cynthia Kuhn and Cindy Carlson

The first academic volume to address such an extensive range of texts. An essential resource for anyone interested in the history of dress and its artistic representations and significations.

Covering a variety of genres and periods from medieval epic to contemporary speculative fiction, Styling Texts explores the fascinating ways in which dress performs in literature. Numerous authors have made powerful—even radical—use of clothing and its implications, and the essays collected here demonstrate how scholarly attention to literary fashioning can contribute to a deeper understanding of texts, their contexts, and their innovations. These generative and engaging discussions focus on issues such as fashion and anti-fashion; clothing reform; transvestism; sartorial economics; style and the gaze; transgressive modes; and class, gender, or race “passing.”

This is the first academic volume to address such an extensive range of texts, inviting consideration of how fashionable desires and concerns not only articulate the aesthetics, subjectivities, and controversies of a given culture, but also communicate across temporal and spatial divisions. Styling Texts is an essential resource for anyone interested in the artistic representations and significations of dress.

"In the streets and on the page, fashion serves as an index and a vehicle of cultural change and possibility...fashion is not only taken more seriously as an area of scholarly inquiry but literary studies has become more willing to consider its own relationship to popular culture. The time has certainly come for a book such as this, which, for the first time, uncovers fashion’s prominent place in literature, tracing the threads woven throughout its pages." - Suzanne Ferriss, Ph.D. Professor of English, Nova Southeastern University

Cynthia Kuhn is Associate Professor of English at Metro State in Colorado. She received her Ph.D. from the University of Denver. Her writing has appeared in McSweeney’s Quarterly, Copper Nickel, Literary Mama, and other publications, and she is the author of Self-Fashioning in Margaret Atwood’s Fiction: Dress, Culture and Identity (2005).

Cindy Carlson is Professor of English at Metropolitan State College in Denver, Colorado. She is the co-editor of Gender Reconstructions: Pornography and Perversions in Literature and Culture (2002) and Constructions of Widowhood and Virginity in the Middle Ages (1999). She has also published articles on medieval drama and Shakespeare.


Jennie Batchelor is Senior Lecturer in English and American Literature at the University of Kent. She is the author of Dress, Distress and Desire: Clothing and the Female Body in Eighteenth-Century Literature (2005), co-editor of British Women’s Writing in the Long Eighteenth Century: Authorship, History, Politics (2005), co-editor of Women and Material Culture, 1660-1830 and the co-series editor of a forthcoming ten-volume history of British Women’s Writing. She has written articles on eighteenth-century fashion for Studies in Eighteenth-Century Culture and Women’s History Magazine and has also published on prostitution narratives, the fiction of Sarah Scott and the archives of the Royal Literary Fund. She is currently working on a monograph on women and work in the eighteenth century.


Amy E. Cummins is Assistant Professor of English at Fort Hays State University, where she teaches courses in composition, world literature, and nineteenth-century American literature. Her research interests include the recovery of neglected women authors. She has published articles in American History through Literature, 1820-1870, Eureka Studies in Teaching Short Fiction, and The Journal of the Midwest Modern Language Association and has essays forthcoming in L. M. Montgomery’s Anne of Green Gables: A Children’s Classic at 100 and Southern Studies.


Suzanne Ferriss is Professor of English at Nova Southeastern University. She has co-edited two volumes on the cultural study of fashion: On Fashion (1994) and Footnotes: On Shoes (2001), which was nominated for the Popular Culture Association’s Susan Koppelman award. She is also co-author of A Handbook of Literary Feminisms (2002). Most recently, she co-edited Chick Lit: The New Woman’s Fiction (2006) and Chick Flicks: Contemporary Women at the Movies (2007).


Roxanne Harde is Assistant Professor of English at Augustana Faculty, University of Alberta in Camrose, Alberta. She earned her doctorate at Queen’s University and held a SSHRC Postdoctoral Fellowship at Cornell. She works mainly on the intersections between American women’s writing and feminist theologies. Her work has appeared in several collections and the journals Mosaic, Legacy, Christianity and Literature, and Studies in Puritan American Spirituality. Her work on Elizabeth Stuart Phelps is supported by the Social Sciences and Humanities Research Council of Canada.


Lori Harrison-Kahan is Visiting Assistant Professor of English at Connecticut College. After receiving her Ph.D. in English and Comparative Literature from Columbia University, she held a postdoctoral fellowship at the University of Pennsylvania and taught in the History and Literature program at Harvard. She has published several articles on multiethnic literature and women’s writing, including essays in MELUS, Modern Fiction Studies, and Legacy. She is currently working on a book, Imitations of White: Fashioning Femininity in the Black-Jewish Imaginary, which examines how twentieth-century ethnic women writers used writing, fashion, and performance as instruments of self-making.


Elizabeth Howard is Associate Professor in English at Kent State University, where she is also a Fellow at the Institute for Bibliography and Editing. Dr. Howard earned her Ph.D. from the University of Kansas. She is currently working on a second edition of Tripp’s Alternative Beowulf, a groundbreaking translation of Beowulf by Raymond P. Tripp, Jr. Additionally, she is analyzing the heretofore unrecognized wordplay in Beowulf.


Clair Hughes was Professor of English and American Literature at International Christian University, Tokyo, until 2004. She was educated in Scotland, at Bristol University and at the Courtauld Institute, London. Her professional career has been in British and Japanese institutions of higher education, teaching literature, theatre history and the history of art. Dr. Hughes has published several books in Japan on English art, articles on Henry James, the Anglo-Irish Novel, and the novels of Anita Brookner. She is the author of Henry James and the Art of Dress (2001) and Dressed in Fiction (2005).


Justin A. Joyce has co-edited A Melvin Dixon Critical Reader (2006), a collection of essays by the late African-American critic. He is a doctoral candidate in the English Department at University of Illinois-Chicago, currently writing a dissertation on masculinities and violence in contemporary Hollywood Westerns.


Robert I. Lublin is Assistant Professor of Theatre Arts at the University of Massachusetts, Boston. He has published a number of essays on early modern and postmodern drama, and is currently completing a book titled Costuming the Shakespearean Stage: Visual Codes of Representation in Early Modern Theatre and Culture.


Ruth Mayer holds the chair of American Studies at the University of Hanover, Germany. She has published extensively in English and in German, focusing on science studies and cultural studies, and on the debates around cultural contact and transcultural communication. Her most recent book publications are Artificial Africas: Colonial Images in the Times of Globalization (2002), Diaspora. Eine kritische Begriffsbestimmung (2005) and Melodrama! The Mode of Excess from Early America to Hollywood, co-edited with Frank Kelleter and Barbara Krah (2007).


Catherine A. Milton is Associate Professor of English at Norwalk Community College. She received her Ph.D. in Victorian Literature from New York University where her work focused on post-colonial analyses of the novels of Charlotte Bronte, Elizabeth Gaskell and Joseph Conrad. She is currently the Director of the Fairfield County Women's Center.


Rafael Miguel Montes is Associate Professor in the Department of English and Humanities at St. Thomas University in Miami, Florida. He is the author of Making Places-Haciendo Lugares: Generational Traumas in Contemporary Cuban-American Literature (2006). He has also written a number of articles on the ever-evolving Cuban and Cuban American community in Miami.


Catherine Spooner is Lecturer in the Department of English and Creative Writing at Lancaster University, UK. She is the author of Fashioning Gothic Bodies (2004), an investigation of the relationship between fashion discourses and Gothic literature and film from the late eighteenth to the late twentieth century, and Contemporary Gothic (2006), a further exploration of Gothic in material culture. With Emma McEvoy, she has co-edited The Routledge Companion to Gothic (2007) and is co-writing Beginning Gothic (forthcoming).


Natalie Stillman-Webb is Assistant Professor/Lecturer in the University Writing Program at the University of Utah, having received her Ph.D. in English from Purdue University. Her research interests include American women’s fiction, narrative experimentation, and consumer culture. She has published articles on the memoirs of Maxine Hong Kingston and Jill Ker Conway, as well as on the poetry of Elizabeth Spires.


Jessica Lyn Van Slooten is Assistant Professor of English at the University of Wisconsin-Manitowoc. Her articles on chick lit, romance, and feminism appear in Searching the Soul of Ally McBeal and Chick Lit: The New Woman's Fiction. She is currently working on a book-length study of fashion, consumption, and romance in twentieth-century New York City fiction, as well as a chick lit novel.


Tamara S. Wagner obtained her Ph.D. from the University of Cambridge in 2002 and is currently Assistant Professor of English Literature at the School of Humanities and Social Sciences at Nanyang in Singapore. Her books include Longing: Narratives of Nostalgia in the British Novel, 1740-1890 (2004), Occidentalism in Novels of Malaysia and Singapore, 1819-2004 (2005), and Financial Speculation in Victorian Fiction: Plotting Money and the Novel Genre, 1815-1901 (forthcoming). Wagner’s current projects include a study of Victorian cultural fictions of the “shabby genteel” and representations of the Regency period. She is also editing a collection of essays on nineteenth-century consumer culture.


Rachel Warburton is Assistant Professor of English at Lakehead University, where she teaches seventeenth-century English literature, women’s writing, and critical theory. Her areas of research include histories of sexuality, early modern cultural studies, and the radical writing of the English Civil War years. She has published articles on Chaucer’s Legend of Good Women, seventeenth-century Quaker women’s friendships, and the gendered semiotics of early modern cross-dressing and translation. Dr. Warburton was the recipient of the 2003 Florence Howe Award for outstanding feminist scholarship, awarded by the Women’s Caucus of the MLA.


Judith Wylie is Assistant Professor of English at Virginia Intermont College. She has contributed to the Victorians Institute Journal (“Incarnate Crimes: Masculine Gendering and the Double in Jane Eyre”) and to Persuasions: the Jane Austen Journal (“Dancing in Chains: Feminist Satire in Pride and Prejudice”). At present, she is working on a book focusing on the relationship of feminist film theory to Austen’s subversive comic strategies entitled Jane Laughs: Ambiguous Humor in the Writings of Jane Austen.


Chapter 2: Chaucer’s Grisilde, Her Smock, and the Fashioning of a Character (Cindy Carlson)


Chapter 4: "Whosoever loves not Picture, is injurious to Truth": Costumes and the Stuart Masque (Robert I. Lublin)


Chapter 10: A Heterogeneous Thing: Transvestism and Hybridity in Jane Eyre (Catherine A. Milton)


Chapter 12: Realism into Metaphor: Black and White Dress in the Fiction of Henry James (Clair Hughes)


Chapter 14: "Nothing could be seen whole or read from start to finish": Transvestism and Imitation in Orlando and Nightwood (Rachel Warburton)


Chapter 16: No Slaves to Fashion: Designing Women in the Fiction of Jessie Fauset and Anzia Yezierska (Lori Harrison-Kahan)


Chapter 17: "Be what you want": Clothing and Subjectivity in Toni Morrison’s Jazz (Natalie Stillman-Webb)


Chapter 20: "Clothes would only confuse them": Sartorial Culture in Oryx and Crake (Cynthia Kuhn)