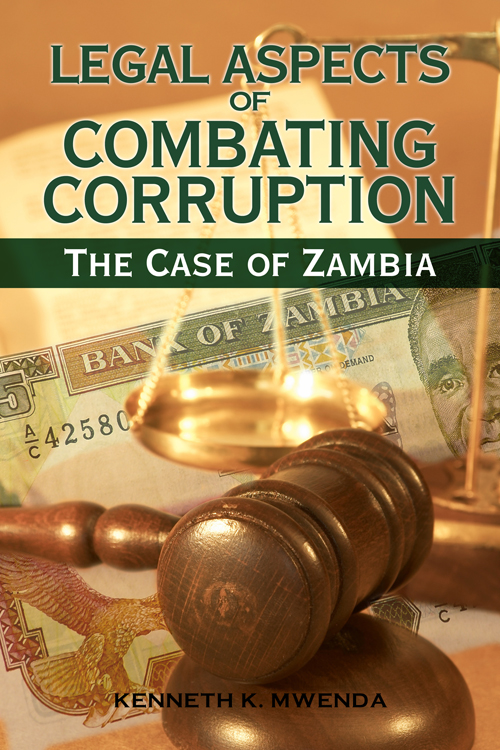 Legal Aspects of Combating Corruption: The Case of Zambia by Kenneth K. Mwenda

"highly recommended work for people in other countries, especially developing ones, who are also involved in the fight against corruption to draw lessons from Zambia’s attempt to rid itself from this scourge."

Poverty-related problems facing Africa are not only overwhelming but are also monumental and worrisome. Some of Africa’s poverty problems are self-inflicted and have increasingly become systemically chronic, while others are externally instigated. This book focuses on an aspect of those problems that are principally internal to Africa––the issue of corruption. The book picks out Zambia as a case study. Thus, the efficacy of the legal and institutional framework for fighting corruption in Zambia is examined. As an authoritative text on Zambian jurisprudence, this book brings out critically and analytically incisive legal perspectives. The book also makes reference to closely related developments in other jurisdictions. Weaknesses in the legal and institutional framework in Zambia are identified, and the book spells out proposals to strengthen the framework.

"The book is an excellent attempt to set the record straight on the otherwise often confusing present situation in Zambia vis-à-vis the established legal and institutional mechanisms, which sometimes appear to compete against each other. This seems to work against the very raison d’être or objective for which they were instituted. The book attempts to provide some solutions on how this could be avoided or overcome. ... It is a highly recommended work for people in other countries, especially developing ones, who are also involved in the fight against corruption to draw lessons from Zambia’s attempt to rid itself from this scourge." - Dr. Mpazi Sinjela, LL.B (UNZA), LL.M, JSD (Yale) Dean, WIPO Worldwide Academy; Professor, (Visiting), Lund University and Raoul Wallenberg Institute (Sweden); Co-Director and Professor, Masters Degree Program in Intellectual Property,University of Turin, (Italy)

Dr. Kenneth Kaoma Mwenda is Senior Counsel in the Legal Vice Presidency of the World Bank. A Rhodes Scholar, the author holds a PhD in Law from the University of Warwick (UK), where he also served as a Law Lecturer. He also holds law degrees from Oxford University (UK) and the University of Zambia as well as an MBA degree from the University of Hull (UK). Dr. Mwenda has previously served as Visiting Professor of Law at prominent universities in Europe and Africa, and has given lead presentations at many universities in the US. In addition to this book, he has written sixteen leading books in the fields of international and comparative corporate law and financial services regulation, including international economic law and higher education pertaining to legal studies. His other scholarly publications appear in many leading academic journals worldwide.

1.0 Objectives and context of the book


Chapter 2:Conceptual issues in definitions of corruption and good governance

2.1 Single-criminality test and the issue of extraterritorial criminal jurisdiction

2.2 International views on corruption and some elusive definitions of good governance

2.3 Some views of IFIs on corruption

3.1 Composition of the Anti-Corruption Commission

3.2 Functions of the Anti-Corruption Commission

3.2.1 The role of the Director of Public Prosecutions in fighting corruption

3.3 What are the grounds on which the ACC can refuse to investigate a case of corruption, and can the ACC discontinue an ongoing investigation into corrupt practices?

3.4 Proceedings of the Anti-Corruption Commission

3.5 Committees of the Anti-Corruption Commission

3.6 Funding and financial accountability of the ACC

3.7 The ACC and the disclosure of interest, and the prohibition of information disclosures to unauthorised persons

3.8 Knowledge and suspicion in offences of tipping-off corrupt persons


Chapter 4: Confusing role of the Task Force on Corruption

4.1 The Task Force has no legal authority to bind or subject the ACC to any directives

4.2 Turning the heat up against the Task Force in the fight against corruption


Chapter 5: Directorate of ACC as the body charged with carrying out the day-to-day functions of the competent authority

5.1 The term of office for the Director-General of the ACC

5.2 Powers of the Director-General of the ACC

5.3 The Director-General of the ACC can delegate functions

5.4 Special powers of investigation and the powers of ACC officers to arrest

5.5 Restriction on disposal of property

5.6 Obstructing ACC officers and giving false reports to the ACC


Chapter 6: Political will to fight corruption

6.1 Some evidence on political will to tackle corruption

6.2 More evidence on political will to tackle corruption


Chapter 7: Shifting the burden of proof in corruption cases

7.1 The burden and standard of proof in corruption cases