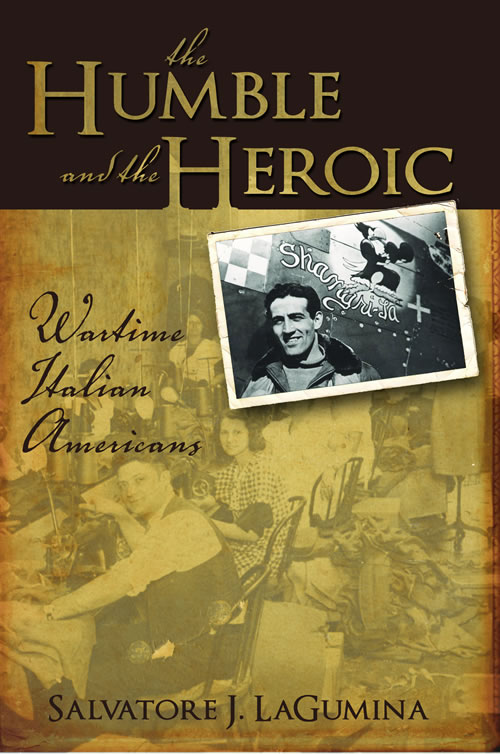 The Humble and the Heroic: Wartime Italian Americans by Salvatore LaGumina

The Humble and the Heroic: Wartime Italian Americans asks two basic questions: Was an extra measure of loyalty and patriotism required of Italian immigrants because the country of their birth was a declared enemy of their adopted country; and, does their WW II experience offer meaningful insights as to how we should treat other immigrant groups in future conflicts?

While the answer to both questions is in the affirmative, the long, arduous, road traveled by the ethnic group has not received the attention it deserves. Their quest for acceptance amidst a path paved with sacrifice, bitter poverty, discrimination, and, for many, the devastating indignity of being designated as “enemy aliens,” is worthy of scholarly study.

"This is a history that was needed for a long time. Many will already have heard parts of it told over the dinner table or in backyard conversations. Now, writing with accuracy and much acquired wisdom, Sal LaGumina has put it all together for future generations." - William J. Connell, Professor of History and La Motta Chair in Italian Studies, Seton Hall University

"La Gumina has created a unique pastiche of scholarship and memoir in this reminiscence of life among those Tom Brokaw called "The Greatest Generation". Story and history from Italian America’s elder statesman combine to show how New York’s Italians become Americans. These reminiscences form a personalized history full of information accessible to a wide range of readers and reward the student and scholar alike." - Fred Gardaphe, Director of Italian American Studies, Stony Brook University

"Salvatore J. LaGumina undertakes the momentous task of telling the story of Italian Americans during a time of anxiety that marked World War II - a vastly neglected subject. He relates the history a maligned people many of whom were regarded as enemies --but who nevertheless achieved redemption by dint of hard work, selfless sacrifice, and astonishing service as they moved beyond the shadow of suspicion to essential and vital positions within the "greatest generation. This constitutes a major contribution not only to the field of Italian American studies, but to a wider understanding of American society." - John Marino, Senior Manager of Research & Cultural Affairs, National Italian American Foundation

"In growing up within a family that had sent two of its sons into World War II, one from each side of my wonderful Italian American family, only I can recall the great pride in what they offered to America. And, moreover, I can vividly recall and hear the prayers of both sets of grandparents, especially the grandmothers, Gaetana and Giovanina praying for the safe return of Frank Sciame and Anthony Pintacuda, both very dear uncles of mine. What Dr. LaGumina does in his publication is to enliven our spirits and makes real the great sacrifices that Italian Americans made for the safety and security of the world, always asking for little but serving for the cause of democracy. Indeed, they were heroes and men and women of the Great Generation, but they were blessed additionally as Italians and Italian Americans, with strong family values and a love for life and family, and a respect that was second to none. We owe Dr. LaGumina a debt of gratitude for emblazoning in our hearts and minds the memories and realities of the early struggles and travails of our grandparents and how their fruits bore freedom to the world, especially during world War II. " - Joseph Sciame, National and New York State Past President, Order Sons of Italy in America

"This memoir of scholar Salvatore J. La Gumina provides a comprehensive look at the role of Italian Americans during World War II. Original in its approach and content, the author weaves first-hand accounts of ordinary and extraordinary Italian Americans with the extensive scholarly research of the period. As events unfold, a vivid picture of the home front unfolds. Though he is a youth growing up in Brooklyn during the war, Professor La Gumina embellishes his story with reactions from Italian Americans to these events, giving a complete historical record. The volume is more than nostalgia. More important, it fills a vital gap in the history of first and second generation Italians in America."

"World War II was a time for testing. Italian Americans represented the largest nationality group to participate in the war. Despite experiencing discrimination and prejudice, the sons and daughters of the nearly five million who came to America proved their loyalty and devotion to their adopted country. Also, at the start of the war, 600,000 of them were labeled "enemy aliens" because many of them had not become citizens. Such designation did not prevent their children from fighting for democracy."

"Professor La Gumina explores the dilemma he and his kin faced in fighting Fascist Italy at a time when many of their relatives continued to live in the homeland. Emerging from the Great Depression, his emphasis is on the social aspects in their struggle to achieve full equality. The volume furnishes fuller understanding of the Italian American experience. It also serves as a model for all the newly-arrived immigrants in the Americanization process." - Dr. Frank J. Cavaioli, Emeritus Professor, SUNY, Farmingdale

"With this book, we learn how ordinary people did extraordinary act's while enduring history's most devastating war." - Sons of Italy

"Provides a comprehensive look at the role the Italian Americans [played] both on the battlefields and on the home front." - Sicilia Parra

"LaGumina's contribution is unique in that it covers the socio-political and cultural elements equally without depending too much on the military basis of most World War II histories...full of information accessible to a wide range of readers." - Fra Noi

Dr. Salvatore J. LaGumina is Professor Emeritus and Director of the Center for Italian American Studies at Nassau Community College. He has been president of the American Italian Historical Association, has written dozens of scholarly articles, and is author, editor or co-editor of seventeen books, including The Italian American Experience: An Encyclopedia; From Steerage to Suburb, Long Island Italians; and Wop, A Documentary History of Anti-Italian Discrimination

Demonstrating Loyalty Amidst Atmosphere of Suspicion

In Search of Heroes

The End of Testing Time