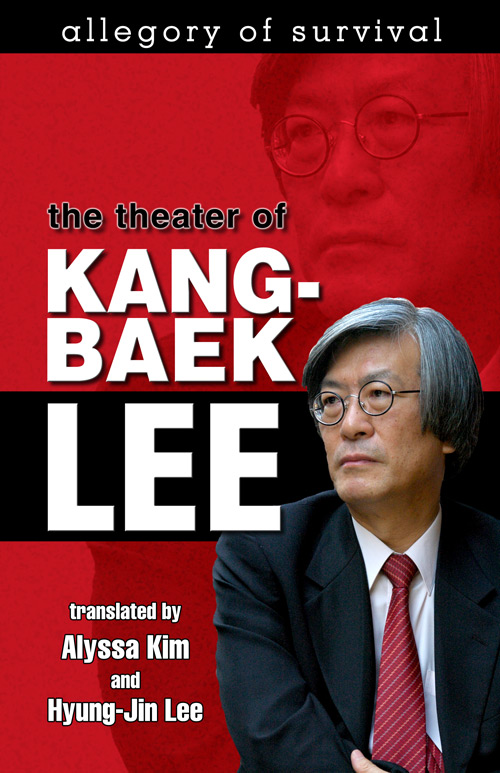 Allegory of Survival: The Theater of Kang-baek Lee (Hardcover) by translated by Alyssa Kim and Hyung-jin Lee

In the civil and government upheaval of the 1960s and 1970s in Korea, Kang-baek Lee began his distinguished playwriting career. He is perhaps best known as the premier writer of social commentary in the form of allegories in an effort to circumvent extremely strict censorship laws which were heavily enforced until 1989. However, Lee is not just an allegorist. He weaves Confucianism values throughout his works: affection between fathers and sons; justice; relationships between husbands and wives; deference to the elders; and trust.

Through over forty works, Kang-baek Lee has played and continues to play a formidable role in South Korean theatre, but Western appreciation for his works has been limited to Europe. This present anthology introduces to an English-reading audience a playwright whose dedication to the truth could not be squashed by government censorship and whose imagination paved the path for many younger playwrights now at the forefront of South Korean theatre. This book provides insights into Kang-baek Lee as a person and the magnitude of his impact on Korean culture.

“The present anthology introduces to an English-reading audience a playwright whose passion for truth could not be staunched by decades of censorship and whose imagination lit the way for many younger playwrights now at the forefront of South Korean theater...[this book will] not only advance the study of Korean dramatic literature, [it] will provide insights into Kang-baek Lee’s universal humanity and his unquestioned contributions to Korean culture.” – Richard Nichols, Professor of Theater, Penn State University

Alyssa Kim is a lecturer at Hongik University in Seoul, Korea. Dr. Kim holds a PhD in Comparative Literature from Korea University, and studied English Literature at Warwick University in England after receiving her BA in Comparative Literature from University of California at Irvine. Her recent translations include an anthology of Korean translation of Ariel Dorfman’s “The Other Side,” “Widows,” and “Death and the Maiden,” which was published by Changbi Publishers in 2007. Her translation of “Feeling, Like Nirvana”, also by Kang-baek Lee and “Ch’oe Sung-hui” by another Korean playwright, Sam-shik Pai, will be included in the Anthology of Contemporary Korean Theater. She is currently working on the English translation of Hongdongji Nori commissioned by Korea Literature Translation Institute (KLTI).

Hyung-jin Lee is an assistant professor of English at Sookmyung Women's University in Seoul, Korea. Prior to this appointment, he taught Korean and Asian literatures at Rice University. Dr. Lee holds a PhD in Comparative Literature from Pennsylvania State University, and an MA in Comparative Literature from the State University of New York, Binghamton. His translation of Tae-Sok Oh's play "Bellflower" will be included in the Anthology of Contemporary Korean Theater. In 2004, he received a translation grant from the Korea Literature Translation Institute.

Chapter 4: Chaos and Order at a Gallery