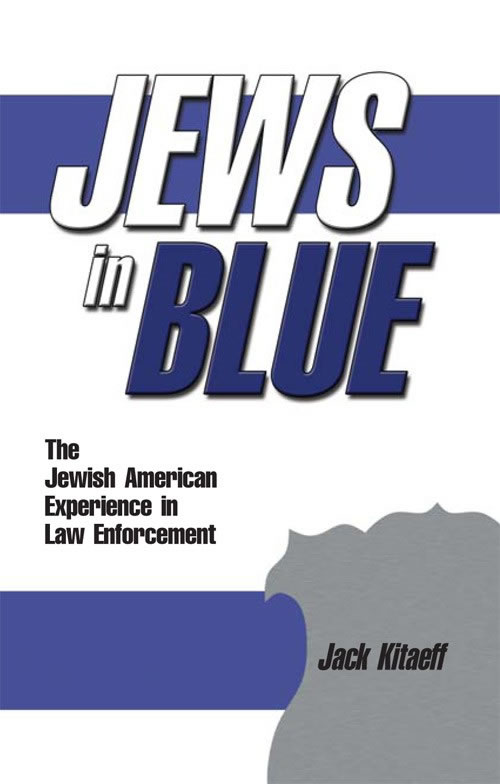 Jews in Blue: The Jewish American Experience in Law Enforcement by Jack Kitaeff

This is the first book to describe the significant and critical contributions of Jewish Americans to law enforcement and police work beginning as early as 1657 in New Amsterdam. It portrays Jewish American men and women in the police departments of New York City and Los Angeles, the Drug Enforcement Agency, and the Department of Homeland Security who stepped forward in momentous times to save the nation from peril. Combining first hand interviews with penetrating contextual research, this book illuminates the heroes of the past and present who share a common Jewish American heritage. In addition to this softcover edition, a special hardcover edition is available that includes a Foreword by Dr. Harvey Schlossberg, Associate Professor of Criminal Justice, St. John’s University, and author of Psychologist with a Gun.

This book will serve as a motivation and roadmap for Jews as well as for others willing to devote their lives to a career in criminal justice. It should be kept as a permanent resource and perhaps required reading for students who often question the value of education and who see their own race, religion, or ethnicity as a roadblock to certain types of careers that are not considered typical for their group.
– Dr. Harvey Schlossberg, Associate Professor of Criminal Justice, St. John’s University

When I think back on my own career and reflect on the careers of other “Jews in Blue,” I am more convinced than ever that ours is an interesting and compelling story. We are a rare breed of police officers who come to the job with enormous faith and history, and a unique perspective about the importance of our contributions to the institution of public safety service. Ours is not just a simple story of symbolism, but more a story of the substance of who we really are in the complex world of law enforcement. This, it seems to me, is all the more reason to have our story told.
– Deputy Chief David P. Baker, Alexandria Police Department, Administrative Services Bureau

I enjoyed reading this book for many reasons. One, of course, is the many Jewish comrades that I have served with over the past 43 years and their strong contributions to the protection of our communities.

Even more important, though, is the simple truth and fact that no law enforcement agency can successfully carry out its mission unless it ethnically and religiously mirrors, in some fashion, the community it protects. Black, White, Hispanic, Asian, Christian, Jew, or Muslim, it is essential that all participate in the protection of our people and our homeland.
– Sheriff James F. Kralik, Sheriff, Rockland County, New York

Dr. Kitaeff’s private practice concentrates on consulting with police and sheriff departments conducting pre-employment psychological screening of law enforcement applicants, fitness-for-duty evaluations, and psychological profiling. He enjoys teaching and writing about psychology and the law, and has edited a book on Forensic Psychology. He is an adjunct professor of psychology with the University of Maryland, and serves on the faculty of the Washington Center as well. He has appeared on several television and radio programs.

Chapter One – Shomrim: the Jewish Watchmen

Chapter Two – Should a Jew be a Cop?