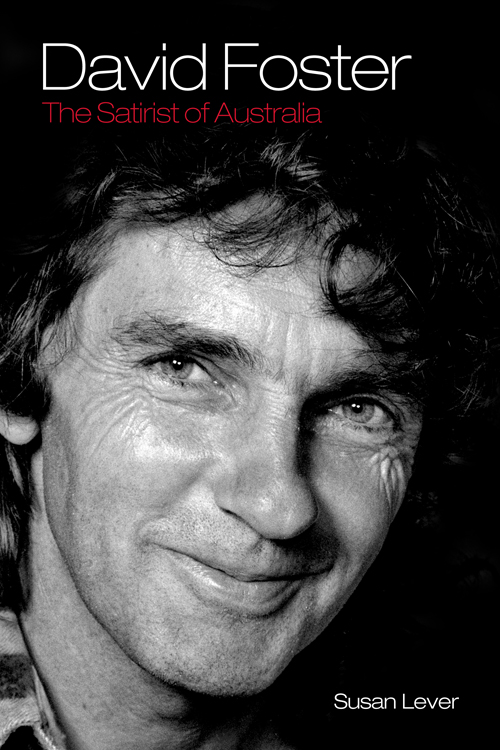 David Foster: The Satirist of Australia by Susan Lever

In this first critical study of David Foster’s works that has been nominated for the McRae Russell Award, Australia's most prestigious Australian award for the best work of literary scholarship, Susan Lever steers us into penetrating the mysteries of Foster’s fiction, and provides guidance to readers willing to approach them. It examines the contradictory nature of his commitments and interests as expressed mainly in his novels.

David Foster is the most original, challenging, contradictory, risk-taking and infuriating Australian novelist of his generation. To date he has published twelve novels, three collections of novellas and short stories, two books of poetry, and a collection of essays, with several produced radio plays.

Four of Foster’s novels have won major literary awards in Australia: his first novel, The Pure Land (1974), shared the first Age Book of the Year award (with volume three of Manning Clark’s A History of Australia) in 1975; his second novel, Moonlite (1981), was the National Book Council Book of the Year for 1981; The Glade Within the Grove (1996) won the Miles Franklin award in 1997; and In the New Country (1999) was the inaugural Brisbane Courier-Mail Book of the Year in 1999. Foster’s novels have attracted the admiration of many other writers and critics, including White, Geoffrey Dutton, Randolph Stow and Annie Proulx, and his contribution to Australian writing has been recognized by several Australia Council grants and a prestigious ‘Keating’ Creative Fellowship in 1991.

Foster writes in an Australian tradition of idiosyncratic satire and comedy that may be traced through the work of Joseph Furphy, Miles Franklin, Xavier Herbert and David Ireland. His novels are the most wide-ranging and fearless of the Australian novels that have contributed to the late twentieth-century re-examination of Western ideologies and the literary forms in which they are expressed.

Despite the originality and importance of this fiction, Foster’s writing is relatively unknown beyond Australia, and in Australia not much beyond a group of loyal readers. He has never acquired the international following of contemporaries such as Peter Carey or David Malouf, or the Australian readerships of Helen Garner or Elizabeth Jolley.

While a degree of critical neglect may account for part of this situation, there are other clear reasons for Foster’s lack of fame. Firstly, he is a satirist; his writing sets itself deliberately against the favourite beliefs of the educated readers who are most likely to read it. His work is opinionated, misanthropic, obsessive and sometimes tedious. Secondly, he is a committed modernist, pursuing linguistic experiment and convinced that writing remains, at least partly, an improvisatory performance. Thirdly, his writing mixes genres, modes and language registers; his work combines low humour and high cultural seriousness. Foster is a novelist of ideas rather than character; readers cannot slip into sympathetic identification with his characters because they exist to express ideas rather than individual psychologies. One could go on to list Foster’s toughness of mind and his spiritual obsessions, as if they were negatives, but the qualities that make Foster difficult are, of course, also those that make his books rewarding to read.

In this first critical study of David Foster’s works, Susan Lever steers us into penetrating the mysteries of Foster’s fiction, and provides guidance to readers willing to approach them. The book examines the contradictory nature of his commitments and interests as expressed mainly in his novels. Each of his works of fiction and poetry in the order of publication (except for The Adventures of Christian Rosy Cross and The Pale Blue Crochet Coathanger Cover which are discussed with similar novels) are discussed. The development of Foster’s philosophical ideas and technique as a novelist over the 35 years of his writing life to date is followed. The book also examines Foster’s letters to Geoffrey Dutton early in his career; his interviews and essays provide some of the background to these novels. The book also furnishes a sense of the Australian context for his work. A brief biography of Foster’s early life and a discussion of his approach to satire is also included.

David Foster is an important book for all Literature and Australasian Collections.

"Lever begins the very necessary work of bridging the gap between generalist studies of European or British satire and the idiosyncrasies of Australian satirical writing ... In allowing Foster's voice within the book's narrative in a manner that recalls Swift's use of footnotes and asides, Lever signals her sympathy with Foster's project and her lively engagement with theories of satire ... Her approach is richly suggestive, showing Fostefras a novelist reminiscent not only of White, but of the major European satirists--Lewis, James Joyce, Laurence Sterne." - Australian Literary Studies

"Remarkable in many ways ... Lever’s analysis is entertainingly accessible and navigates a path through the extremes of contemporary literary theory to explain Foster’s complex philosophical ideas and stylistic idiosyncrasies. In addition, Lever interweaves a portrait of Foster himself that offers many insights into his persona and personality." - JASAL

"Like her subject, Lever has taken chances and it has paid off." - The Australian Literary Review

"A meticulous and scholarly study of Foster's writing." - Westerly

"Susan Lever’s comprehensive study of Foster’s work and career rightly emphasises the fundamental source of Foster’s satire...Susan Lever’s sympathetic study of a difficult but rewarding writer will do much, I trust, to rekindle interest in this most individual and challenging of our contemporaries, Patrick White’s worthy successor." – Andrew Riemer, Chief Reviewer for the Sydney Morning Herald

Susan Lever is Associate Professor in the School of Humanities and Social Sciences at the University of New South Wales, Australia.

She was educated at Australian National University (BA) and the University of Sydney (MA, PhD). In addition to over twenty-one years of teaching at UNSW, she has also taught at ANU and Griffith University as well as spending two semesters as the Käthe Leichter guest professor for feminist studies at the University of Vienna. She has served in various public roles, including a term on the Literature Board of the Australia Council and two years as President of the Association for the Study of Australian Literature (ASAL). She was Deputy Rector (Research) for UNSW at ADFA, 2000–2002. She is currently editor of JASAL, the Journal of the Association for the Study of Australian Literature and editor of the Australian Literary Studies book series by Cambria Press.

Professor Lever’s publications include Real Relations: The Feminist Politics of Form in Australian Fiction; Henry Handel Richardson: The Getting of Wisdom, stories, selected prose and correspondence; Oxford Book of Australian Women's Verse; A Question of Commitment: Australian literature in the Twenty Years after the War; and entries on Thea Astley, Martin Boyd, David Foster, Helen Garner, Henry Handel Richardson and Mary Theresa Vidal for the Dictionary of Literary Biography, edited by Selina Samuels.

The Making of a Manichee


Chapter 2: 'Hey listen Australia! Wake up to yourself will you!' Early Works

The Adventures of Christian Rosy Cross


Chapter 4: A Thousan' Miles from Nowhere: Plumbum and Dog Rock


Chapter 6: A Religion for a Philosophy: The Glade Within the Grove and The Ballad of Erinungarah

The Glade Within the Grove


Chapter 7: Back to the Holy Isle

In the New Country

The Land Where Stories End

A Year of Slow Food

Conclusion: Surviving as a Writer

Bibliography of Works by and about David Foster