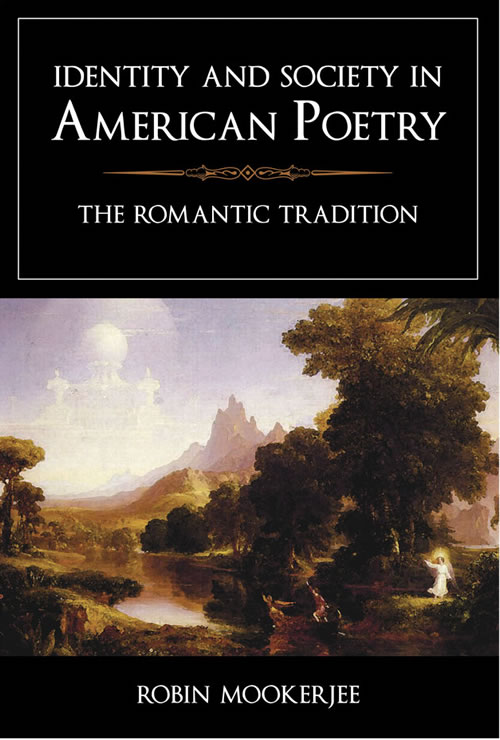 Identity and Society in American Poetry: The Romantic Tradition by Robin Mookerjee

This book is a valuable source for scholars with an interest in Emerson and Pound Studies, the intellectual traditions leading to Modernism, and the Objectivist and Black Mountain schools of American poetry.

This new study of American poetry views the poetics of Ezra Pound and his avant-garde followers in an entirely new light. Both Romanticism and Modernism have variously been seen as revolutionary or retrograde, narcissistic or self-abnegating. This interdisciplinary work looks past distinctions between schools and styles to reveal an unexpected link between poets’ spiritual aspirations, formal experiments, and political convictions. Along the way, it sheds light on the complex relationship between art and society.

Beginning with a fresh reading of Emerson’s elusive philosophy, the author identifies the tension between Romanticism and Liberalism as a source of Modernist poetics. Critics have dissected the eccentric forms of avant-garde American poetry but have never adequately explained its scrupulous avoidance of abstraction and elimination of the poet from the poem. Drawing extensively on classic and contemporary theory, this book reveals postwar poetics, particularly the epics Paterson and The Maximus Poems, as the fulfillment of a longstanding Romantic social vision, one which seeks to invest Liberal social structures with a transcendental core.

This book is a valuable source for scholars with an interest in Emerson and Pound Studies, the intellectual traditions leading to Modernism, and the Objectivist and Black Mountain schools of American poetry.

"An ambitious theoretical study of modern and postmodern poetry and its historical, philosophical, and political backgrounds ... Recommended." - CHOICE

Robin Mookerjee is an Assistant Professor in Writing and Literature at Eugene Lang College, The New School for Liberal Arts. He has been an administrator and faculty member at Lang since 2000, serving as Director of Curriculum, Chair of the First Year, and Director of First Year Writing. He received his Ph.D. in Literature from New York University. In addition to scholarly work, Dr. Mookerjee writes fiction and poetry and has published in such journals as Painted Bride Quarterly, Literature and Medicine, and La Petite Zine.


Introduction: The Estrangement of Poet and Reader

Critics in the Material World

The Dissociation of the Poet: A Brief History

An Overview of this Study

A Note on Inclusion and Exclusion


1. Romanticism and Politics: Perspectives and Contexts

Romanticism and Liberalism in Conflict

From Aesthetics to Real World Politics

The Impersonal is Political

Emerson as a Psychologist

The Self as Society

Transcendental vs. Empirical Concepts of Identity

"Experience": The Consequences of Power

From Emerson to Whitman to Pound

The Translator as God

The Search for a Company

Questioning the Public Self


4. Infinity and Community in Emerson and Pound

The Self as Other: More Emersonian Paradoxes

The Community of Solitude (Revisited)

Pound: The Elimination of Otherness

The Cantos as a Mirror of Self


5. The Poem as Social Contract: Notes on the School of Pound

Williams: The Importance of Place

Paterson, Book One: Twilight of the Gods


6. The "New Liberalism" of Williams and Olson

Radical Pluralism: Self and Fact in Paterson

Freedom of Association: The Maximus Poems