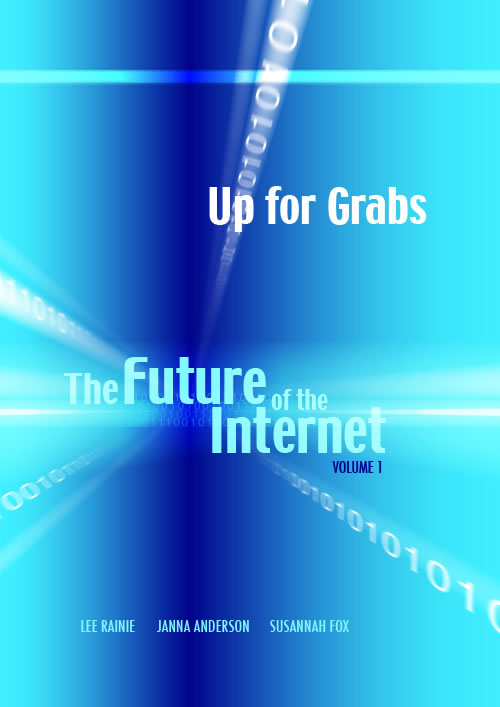 Up for Grabs: The Future of the Internet I by Lee Rainie, Janna Anderson, and Susannah Fox

This is the first volume of an exciting series on the future of the internet by the Pew Internet & American Life Project and Elon University. Based on the feedback of nearly 1,300 leading technology experts and scholars, this book provides insight on how the Internet expected to change the workplace, family life, education and many other foundations of society.

Up for Grabs: The Future of the Internet, Volume 1 is the first volume of an exciting series by the Pew Internet & American Life Project and Elon University.

How will the Internet be expected to change the workplace, family life, education and many other foundations of society between 2004 and 2014? Significantly. That was the forecast of nearly 1,300 leading technology experts and scholars who responded to The Future of the Internet I, a 2004 survey by researchers at the Pew Internet & American Life Project and Elon University. The extensive elaborations supplied by survey respondents provide a vision of a networked, digital future that enhances many peoples' lives but also has some distressing implications. The big-picture Internet issues of the next decade, as foreseen by the experts in this survey, include: positive and negative changes in the family dynamic; a conflict between our desire for privacy, security and ownership of intellectual property and our desire for the convenience of free information sharing on networked devices; and a concern over being inundated with information.

About the series: Technology builders, entrepreneurs, consultants, academicians, and futurists from around the world share their wisdom in The Future of the Internet surveys conducted by the Pew Internet & American Life Project and Elon University. The series of surveys garners smart, detailed assessments of multi-layered issues from a variety of voices, ranging from the scientists and engineers who created the first Internet architecture a decade ago to social commentators to technology leaders in corporations, media, government, and higher education. Among the respondents are people affiliated with many of the world's top organizations, including IBM, AOL, Microsoft, Intel, ICANN, the Internet Society, Google, W3C, Internet2, and Oracle; Harvard, MIT, and Yale; and the Federal Communications Commission, FBI, U.S. Census Bureau, Social Security Administration, and U.S. Department of State. They provide significant and telling responses to questions about the future of government, education, media, entertainment, commerce, and more. They foresee continuing conflicts over control of networked communications and the content produced and shared online. They also predict the major changes ahead for everyone in every field of endeavor.

"A thoughtful and thorough discussion of the Internet, which will be useful to those seeking expert opinions for their own work ... Recommended." - CHOICE

Janna Anderson is an associate professor at Elon University’s School of Communications and the director of Imagining the Internet, a Webby Honors-winning online compilation of survey studies and documentary videos illuminating the future of the internet. This project, launched in 2003, is where the Future of the Internet studies were first introduced. She has written articles for USA Today, Advertising Age, and the New York Times News Service and is author of the book Imagining the Internet. She serves on the editorial board of Newspaper Research Journal, is a reviewer for New Media & Society, and is a contributor to State of the Future reports. She is the winner of several national and international awards for web design and content.

Susannah Fox is Associate Director of the Editorial Department at the Pew Internet & American Life Project. Susannah graduated from Wesleyan University with a degree in anthropology. She is a frequent speaker on topics such as internet health resources, privacy online, and wired seniors. She has appeared at conferences sponsored by the AARP, the American Medical Informatics Association, the American Public Health Association, the International Association of Privacy Professionals, and the Federal Communications Commission.

Part 17. Looking Back, Looking Ahead