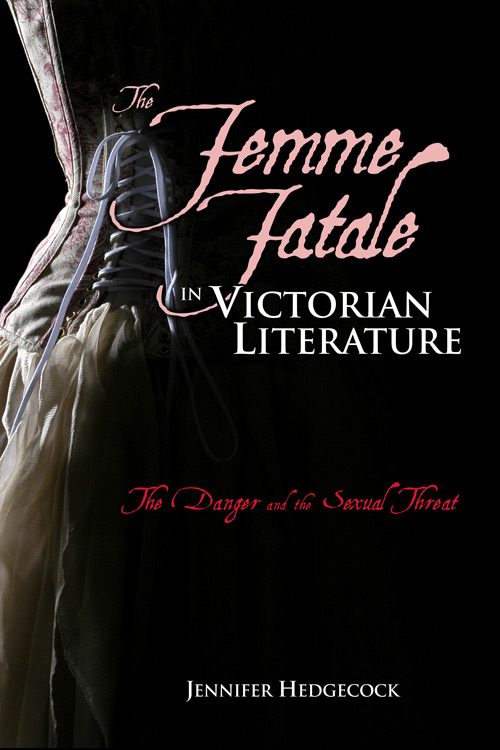 The Femme Fatale in Victorian Literature: The Danger and the Sexual Threat by Jennifer Hedgecock

The Femme Fatale in Victorian Literature is a Marxist-Feminist reading of the Femme Fatale in nineteenth-century British literature that examines the changing social and economic status of women from the 1860s through the 1880s, and rejects the stereotypical mid-Victorian femme fatale portrayed by conservative ideologues critiquing popular fiction by Wilkie Collins, Mary Elizabeth Braddon, Honoré de Balzac, and William Makepeace Thackeray. In these book reviews, the female protagonist is simply minimized to a dangerous woman.

Refuting this one-dimensional characterization, this book argues that the femme fatale comes to represent the real-life struggles of the middle-class Victorian woman who overcomes major adversities such as poverty, abusive husbands, abandonment, single parenthood, limited job opportunities, the criminal underworld, and Victorian society’s harsh invective against her.

To overcome these hardships, she reverses her socioeconomic status, an act which demonstrates her self-reliance compared to other Victorian feminine literary figures. The femme fatale, in fact, becomes a precursor to the campaigns against the Contagious Diseases Acts, to the emergence of the New Woman, movements that illustrate more empowering subject positions of women during the later part of the nineteenth century, and subverts patriarchal constructions of domesticity and “fallenness” used to undermine women. More specifically, the femme fatale in the mid-century novel is a protest against representations of women as fallen and domestic.

The Femme Fatale in Victorian Literature will be an important book for scholars in literature and Women’s Studies.

"Jennifer Hedgecock's study of the Victorian 'femme fatale' is clearly a feminist study, and that means a Marxist study, of the difficult situation and limited options Victorian women faced in nineteenth century England, especially if they were from the lower middle and working class. But with the exception of an occasional concession to the ideologically charged linguistic coinages currently used to establish one's credentials as respectably 'politically correct,' Dr. Hedgecock spares us polemic. In fact, a reader is hard pressed to discern any ideology at work, feminist or otherwise. And that's as it should be. Instead of encountering the tidal pull of ideology, of being swept up and carried down by the currents of the zeitgeist as one does so often in contemporary criticism, the reader of The Femme Fatale in Victorian Literature bathes in the satisfying sensation of encountering Marxist criticism at its best, and that means old style criticism of a high order largely untouched by Foucault's post-structuralism or Derrida's deconstruction." - Victor Comerchero, Professor Emeritus of English, California State University, Sacramento

Jennifer Hedgecock currently teaches American and British Literature and writing at the University of California, Irvine, and at Chapman University. She received her Ph.D. from Michigan State University, her Master's and Bachelor's from CSU, Sacramento, in nineteenth-century British Literature, and has studied the works of Thomas Hardy at Oxford University, Trinity College.

Chapter 3: The Cultural Phenomenon of the Mid-Victorian Femme Fatale

Chapter 5: Sexual Danger and the Threat of the Femme Fatale in Armadale