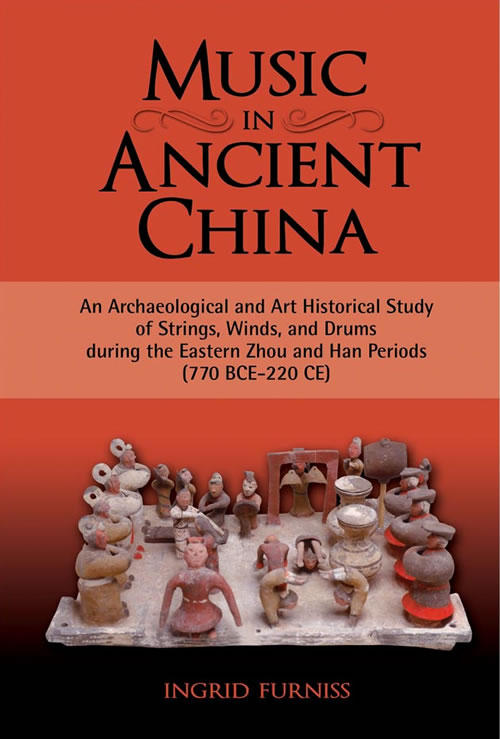 Music in Ancient China: An Archaeological and Art Historical Study of Strings, Winds, and Drums during the Eastern Zhou and Han Periods (770 BCE-220 CE) by Ingrid Furniss

Winner of the 2010 Nicolas Bessaraboff Prize by the American Musical Instrument Society. This prize is awarded for the most distinguished book-length work in English which best furthers the Society's goal to promote study of the history, design, and use of musical instruments in all cultures and from all periods.

Winner of the 2010 Nicolas Bessaraboff Prize by the American Musical Instrument Society. This prize is awarded for the most distinguished book-length work in English which best furthers the Society's goal to promote study of the history, design, and use of musical instruments in all cultures and from all periods.

Many tombs dating to the Eastern Zhou (770-221 BCE) and Han (206 BCE-220 AD) periods contain musical instruments or their visual representations in the form of wood, stone, and ceramic figures, tomb tiles, and engravings. These finds suggest that music was viewed as an important part of the afterlife. While bells have survived more frequently than wooden instruments, and therefore have received the most scholarly attention, strings, winds, and drums are the focus of discussion in this book.

The book examines the use of these three instrument types in both solo and ensemble music, as well as the social, ritual, and entertainment functions of each. When combined with bells (and chime stones), strings, drums, and winds appear to have been associated with formal ritual ceremonies. However, when appearing alone or in assemblages with other wooden instruments during Zhou, they appear to be connected with warfare and entertainment. By Han times, strings, winds, and drums seem to be associated almost exclusively with entertainment, pointing to a shift in the social life of the times.

Another topic explored in this book is the association of musical instruments with wealth. When combined with bells and chime stones, they are only found in the wealthiest tombs. However, when found by themselves, strings, winds, and drums appear in small to large, modest to wealthy tombs, suggesting that they were available to a broad range of peoples in early Chinese elite society. This book analyzes an often disregarded aspect of early Chinese music, the role of strings, winds, and drums.

Music in Ancient China will be a valuable book for those interested in ethnomusicology and music history, Asian art history and archaeology, and Asian studies.

In addition to numerous articles and presentations, Dr. Furniss’ experience includes curatorial work at the Metropolitan Museum of Art, the St. Louis Art Museum, and the Museum of Fine Arts, Houston. She has also served as a freelance researcher for Saskia Cultural Documentation, Ltd. in Maine, and as a "trench master" for an archaeological expedition in Polis, Cyprus for Princeton University.

Chapter One: Introduction and Methodology

Regional Boundaries and the Problem of Chu

Drum Types of Zhou and Han

Drums Without Suspension or Poles

Wealth and Ownership of Drums

The Role of Drums in Warfare or War Ceremonies

Structural Relationships Between the Se, Qin, and Five-String Zither

The Twelve- or Thirteen-String Zither

Distribution and Layout of Tombs with Strings Alone

The Qin and the Scholarly Gentleman

Ensembles with Winds, Drums, and Strings

Ensembles of Strings, Drums, and Winds

Category B: Tombs with Wooden Instruments and Bell Sets

Tomb of the King of Nanyue, Guangzhou (Guangdong)

Category B: Southeastern Tombs with Wooden Instruments and Bells

Category B: Northeastern Tombs with Wooden Instruments and Bells