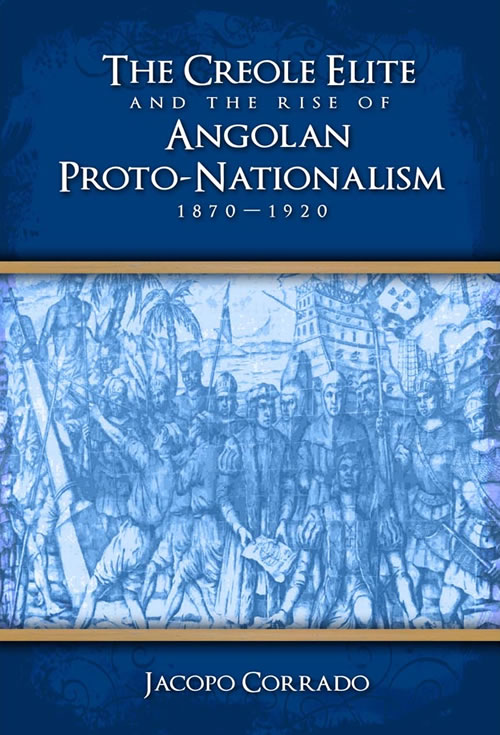 The Creole Elite and the Rise of Angolan Proto-Nationalism, 1870–1920 by Jacopo Corrado

This groundbreaking book is about Angolan literature and culture. It investigates a segment of Angolan history and literature, with which even Portuguese-speaking readers are generally not familiar.

This book is about Angolan literature and culture. It investigates a segment of Angolan history and literature, with which even Portuguese-speaking readers are generally not familiar. Its main purpose is to define the features and the literary production of the so-called ‘creole elite’, as well as its contribution to the early manifestations of dissatisfaction towards colonial rule patent during a period of renewed Portuguese commitment to its African colonies, but also of unrealised ambitions, economic crisis, and socio-political upheaval in Angola and in Portugal itself.

Nineteenth-century Angolan society was characterised by the presence of a semi-urbanised commercial and administrative elite of Portuguese-speaking creole families––white, black, some of mixed race, some Catholic and others Protestant, some old established and others cosmopolitan––who were based in the main coastal towns.

As well as their wealth, derived from the functions performed in the colonial administrative, commercial and customs apparatus, their European-influenced culture and habits clearly distinguished them from the broad native population of black peasants and farm workers. In order to expand its control over the region, Portugal desperately needed the support of this kind of non-coloniser urban elite, which was also used as an assimilating force, or better as a source of dissemination of a relevant model of social behaviour. Thus, until the 1850s great creole merchants and inland chiefs dealt in captive slaves, bound for export to Brazil via Cape Verde and São Tomé: the tribal aristocracy and the creole bourgeoisie thrived on the profits of overseas trade and lived in style, consuming imported alcoholic beverages and wearing European clothes.

After the abolition, however, their social and economic position was eroded by an influx of petty merchants and bureaucrats from Portugal who wished to grasp the commercial and employment opportunities created by a new and modern colonial order, anxious to keep up with other European colonial powers engaged in the partition of the African continent.

This book thus considers the first intellectuals, the early printed publications in the country, and the pioneers of Angolan literature who felt the need to raise their roots to higher dignity. Thus, they wrote grammar, dictionaries, poetry, fiction, and of course, incendiary articles denouncing exploitation, racism, and the different treatment afforded by the colonial authorities to Portuguese expatriates and natives.

The greatest and most Portuguese overseas possession

The literary and cultural influences

The advent of modernity

Between journalism and literature

The new century: Hope and failure