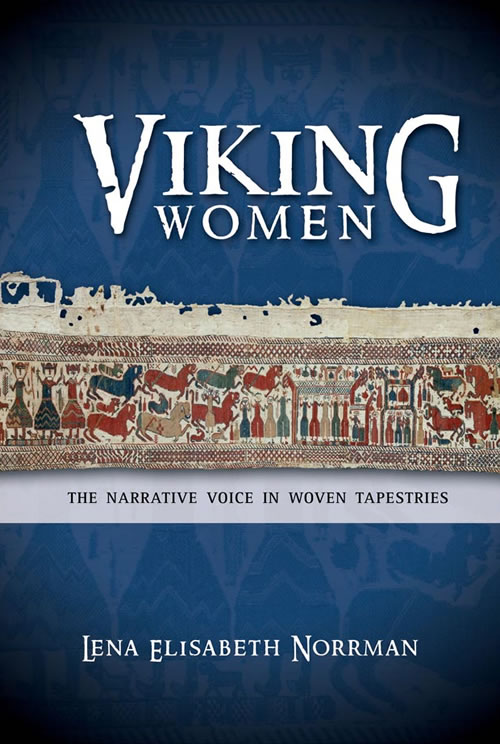 In this groundbreaking book, the author discusses women’s weaving and embroidering and how this craft is contextualized in narratives in circulation, which are passed on from one generation to the next through oral tradition.

At first glance, several literary portrayals of Viking Age women represent them as kings, as warriors, and as inciters of violence, which seems to contradict the image of the passive, housebound female figure. However, those images need to be read and re-interpreted with a measured critical suspicion. For example, several scholars have argued that those images tell little about the real history of Scandinavian and European women but instead represent fantasies expressed by later male authors. In contrast to the literary portrayals, Viking Age women and European women in the Middle Ages stayed at home and were not allowed to let their voices be heard publicly.

In this groundbreaking study by Scandinavian scholar, Lena Norrman, this book posits that women had ways to communicate their lore through visual representations such as weavings and embroideries. The Överhogdal tapestries were found in the northern part of Sweden and dated to circa 1000 AD. Woven with locally dyed wool and linen, these tapestries and weavings have received relatively little scholarly attention. According to the author, the Överhogdal tapestries tell the story of Sigurðr the Dragon Slayer, a depiction that comes more than 200 years earlier than the oldest manuscript of this well-known legend, which was disseminated through different parts of Northern Europe as well in Iceland and Greenland. Equally important, these textile representations are told from a female perspective where the focus is on love, passion, honor and revenge instead of finding the gold, magical weapons and depictions of the killing of the dragon. Using a refreshing perspective, the author’s reading of these textiles is based on theories of oral tradition. She contextualizes these tapestries as narratives in circulation, and more specifically, argues that they allow us to “see” or read women’s stories despite the fact that women’s voices were silent.

Such untraditional outlets as weavings and miracle writings contradict the view of women as silent, passive participants in the events that shaped history. With respect to the Viking Age, this book shows that women had ways to communicate their lore through visual representations such as weavings and embroideries, which are a crucial object of this study.

This is a critical reference for scholars in Scandinavian studies and Women’s studies.

Weaving as a Literary Technique

Weaving in a Feminine Setting

An Introduction to The Saga of the Völsungs

A Reading of the Överhogdal Tapestry