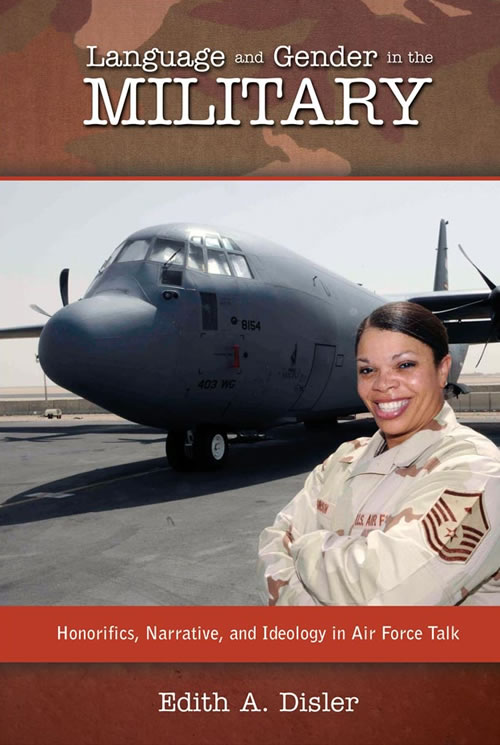 Language and Gender in the Military: Honorifics, Narrative, and Ideology in Air Force Talk by Edith A. Disler

In this landmark book, the author opens the door to considerations of power, gender dynamics, and language and ideology in a community that has not yet been studied using the techniques of discourse analysis.

In the thirty-year history of the study of language and gender, theory and application have branched incrementally like the reaches of a family tree. The study of language and gender has progressed from an eye-opening review of differences between the “language” of women and men to observations that language served to preserve “domination” of one sex over another and on to a cross-cultural approach which observes that the ritual styles of talk that are observed among even the youngest girls and boys at play remain with them as women and men.

Language and gender has been studied in many institutional and organizational environments including medical, legal, law enforcement, academic, and business settings. While all of those settings have historically been marked by gender-based differentials in opportunity, pay, and power, one of the most metaphorically and demographically gender-differentiated institutions has remained unexamined in the sociolinguistic literature: the military. The military is particularly interesting for linguistic study because it is veritably synonymous with the socio-cultural construction of American masculinity, and therefore a fascinating venue for the study of language, gender, and power.

With this innovative study, the author opens the door to considerations of power, gender dynamics, and language and ideology in a community that has not yet been studied using the techniques of discourse analysis. And while some have criticized the utility of examining “outlying cases,” particularly in studies of gender or sexuality in language, the military community, though not studied, can hardly be considered an outlying case. On the contrary, American military identity is part of American identity in that it influences the American masculine construct and has affected 26 million veterans and their families, as well as those who may not be in the military but work with and near military members and installations on a regular basis. Also unique to this study and the author’s analysis of the usage of “ma’am” and “sir” is an approach which does not necessarily examine how women and men use language, but how those in their community use language to address them as women and men.

Edith A. Disler is an associate professor of English and director of the Air Force Humanities Institute at the U.S. Air Force Academy. She holds a PhD in Linguistics with a concentration in Sociolinguistics from Georgetown University, an MA in National Security and Strategic Studies from the Naval War College, an MA in Technical and Expository Writing from the University of Arkansas at Little Rock, and a BA in English from the University of Michigan.

She has regularly presented papers at professional conferences, most recently papers focusing on gender, sexuality and language in the military context. She has published work which examines the applicability of mediated discourse and interactional sociolinguistic analysis to military contexts, a chapter on military metaphor in the book Unpeaceful Metaphors (2002) and numerous book reviews. In addition to her nine years as an instructor and professor at the U.S. Air Force Academy, Dr. Disler has served as Speechwriter to the Secretary of the Air Force and to the Chief of Staff of the Air Force, as an Arms Control Inspector representing U.S. interests in former Warsaw Pact nations and as an intercontinental ballistic missile crewmember.

The American Military as a Context for Linguistic Study


Chapter 3: Gender and Language Intersect: Military Use of “Ma’am” and “Sir”

From Clean Slate to a Matter of Style: Using “Ma’am” and “Sir” Language Socialization

“Ma’am” and “Sir”—Denotation and Connotation

Identifying Environments for “Ma’am” and “Sir”

The Study of Narrative

Ideology in Practice—Nurturing the Forces

Gender as Style and Gender as Cover-up