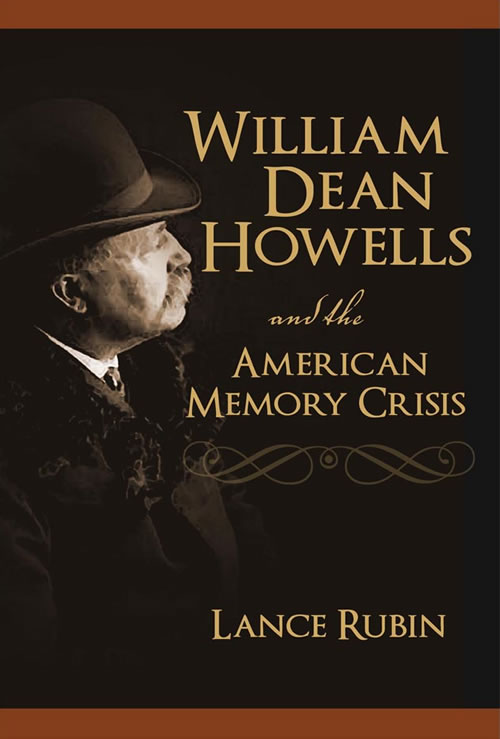 "Lance Rubin‘s William Dean Howells and the American Memory Crisis is a valuable addition to the field. Rubin not only addresses Howells‘s late short fiction, he does so in a novel way, simultaneously introducing the work to a new group of readers—memory is a popular field of inquiry in the humanities and social sciences—and putting it in a fresh interpretive light for Howellsians and others interested in the period." — The Howellsian

With social and political issues providing the foreground of literary studies over the past several years, William Dean Howells has re-emerged as a major author. Yet, among canonical American writers, Howells simultaneously attracts both significant attention and curious neglect. While studies devoted to his novels, The Rise of Silas Lapham and A Hazard of New Fortunes, are proliferating, the attention paid to his later writing, particularly his short fiction, is not only far less sustained but often dismissive, promoting a continuous inattention to the process by which the author discovers new forms and expression. William Dean Howells and the American Memory Crisis confronts the frequent refusal to see Howells as a writer whose lifelong engagement with literature pushed him through generic boundaries in search of new ways of shaping his fiction and questioning American identity.

By focusing on Howells’s preoccupation with tropes of memory and amnesia, this book positions his work within the American “memory crisis,” the turn-of-the-century’s pervasive feelings of fragmentation, loss, and dislocation that followed breathtaking transformations in the pace of everyday life and traditional social structures, which contributed to the sense that the linear inheritance of the past was severely weakened, if not broken beyond repair. As Americans engaged in a politics of memory––with various groups battling for their stake in shaping America’s present and future by defining its past––Howells’s work interacts with a number of social discourses and practices through which national identity was being (re)constructed and debated.

The book explores these sites of memory, including historiography, the rhetoric of imperialism, the revival in historical romantic fiction, the rise of photography, the boom in monument construction, the beginnings of modern advertising, the interest in spiritualism and the occult, and literary history itself.

By focusing on two neglected areas of Howells studies––his late short fiction and his engagement in the politics of memory––William Dean Howells and the American Memory Crisis clarifies the convergence of his aesthetic and political goals and challenges recent innovative studies that situate Howells and literary realism as reinforcing late-nineteenth-century hierarchies of race, class, and gender. As a major figure of the traditional canon, Howells routinely has been positioned as a powerful cultural authority who was either deceptive of his real goals, willfully hypocritical, or ignorant of the actual political scene in which he was working. Rubin’s book complicates some of these accepted views by arguing that, while not apolitical, Howells was not as naïve or as reactionary as some have claimed. By not accounting for the direction Howells takes in his later work, particularly as it imagines and represents memory, previous studies––so reliant on postmodern-influenced criticism ––seem to have often overlooked Howells’s own postmodern leanings. Tropes of memory and amnesia have become prominent in postmodern theories of history and subjectivity, registering anxiety about the stability of the self and serving as metaphors for the impossibility of objective and secure historical narratives. Howells’s work, this book maintains, consistently gestures toward these and other characteristics of the “postmodern” in its approach to history and questions the versions of literary realism that have become sacrosanct within the academy.

Ultimately, this book provides other teachers, researchers, and students with a new framework with which to approach Howells and American realism. As his discussion draws on a variety of discourse in its exploration of America’s politics of memory, a secondary, more interdisciplinary audience includes those interested in political and social theory, history, and cultural studies. This is an important book for scholars, students, and teachers of American literature.

"Lance Rubin‘s William Dean Howells and the American Memory Crisis is a valuable addition to the field. Rubin not only addresses Howells‘s late short fiction, he does so in a novel way, simultaneously introducing the work to a new group of readers—memory is a popular field of inquiry in the humanities and social sciences—and putting it in a fresh interpretive light for Howellsians and others interested in the period." — The Howellsian

Lance Rubin is an assistant professor and chair of humanities at Arapahoe Community College in Littleton, Colorado. He holds a PhD from the University of Denver and an MA from Northwestern University. Dr. Rubin has published and presented papers on a wide variety of American authors, including William Dean Howells, Rebecca Harding Davis, and Philip K. Dick, and is currently co-editing the forthcoming collection Reading Chuck Palahniuk: Monsters, Mayhem and Madness.


Chapter 1: Realism and the Politics of Counter-Memory


Chapter 2: The Memory Crisis, Advertising, and the Ambivalence of Amnesia in “A Sleep and a Forgetting”


Chapter 3: “To Make up an America Among Ourselves”: History, Memory, and the Turkish Room


Chapter 5: “We haven’t any of us perfect memories, have we?”: Monuments, Photographs, and the Construction of Memory