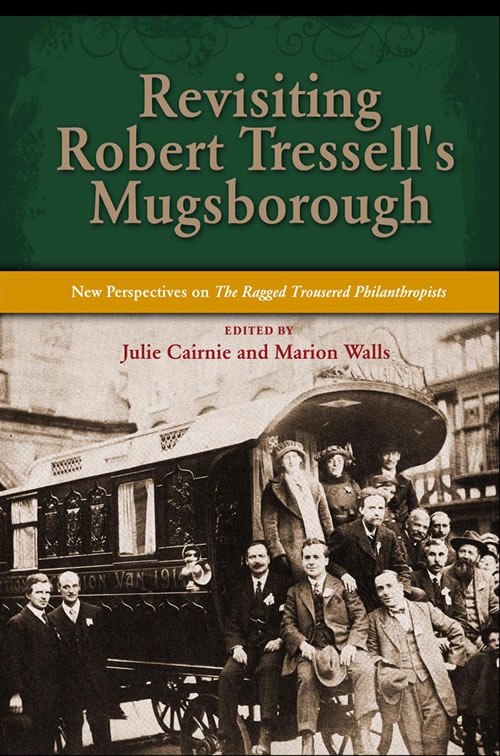 The book comprises work by academics, a librarian, and the widow of Tressell’s biographer, Fred Ball. The focus is on continuity and change in terms of how Tressell’s text is read.

Robert Noonan, whose pseudonym was Robert Tressell, was born in Dublin, Ireland, in 1870, and died in Liverpool, England, in 1911. During his short life, he lived in three countries, Ireland, South Africa, and England, and was involved in and exposed to a range of progressive issues such as Irish nationalism, Boer nationalism, socialism, anti-imperialism, the co-operative movement, and the women’s suffrage campaign. He endured the poverty of a painter and sign-writer’s wages, struggled to convert his fellow workers to socialism, experienced an acrimonious and ultimately secret divorce in South Africa, raised a daughter on his own, dreamed of a better life in Canada, and wrote a novel.

The Ragged Trousered Philanthropists was first published posthumously in 1914. The narrative provided a focus for his view of society and its imperial and capitalist structures; it was a “map” that he hoped would guide a future working class to consciousness. It was desperately hard to write, particularly since he was labouring for fifty-six hours a week at times and suffering from a serious illness, likely tuberculosis. The text covers some sixteen hundred handwritten folio pages. Before he left for Liverpool in 1910, ostensibly to secure passages for him and his daughter to emigrate to Canada, he left the manuscript with his daughter, Kathleen. She eventually sold it the maverick publisher, Grant Richards, for twenty-five pounds. Once published, it proved to be a best seller, both in its heavily abridged editions (1914, 1918) and, since 1955, in its full edition. Much of this biography––particularly Tressell’s Irish, South African, and gendered experiences––has been omitted or treated as incidental.

Readings of Tressell’s life and text have centered on their English, working-class, and socialist elements. The late Fred Ball researched the first biography more than thirty years after Tressell’s death, using the only editions of the text available. These were seriously edited and abridged by Jessie Pope for Grant Richards; her preface maintained that the writer was a “genuine working-class man.” The Ragged Trousered Philanthropists was mostly seen as the work of a working-class writer; there was no reason to think otherwise.

Some recent scholarship disturbs the text’s perceived neatness, pointing out its elitism and middle-class proclivities; and some work re-contextualizes Tressell’s book, placing it within modernist, Irish, South African, and gendered frameworks. The narrative the authors present is not out of step with the so-called “real” world, in fact, it engages with popular reception and debates.

This revolutionary book is an edited collection of essays on Robert Tressell’s, The Ragged Trousered Philanthropists. While two such books were published in the 1980s, The Robert Tressell Papers (1982) and The Robert Tressell Lectures, 1981-1988 (1988), both largely (with only a few brief exceptions) rehearsed the dominant narrative of the text and author as vigorously and unproblematically working class, masculine, and English. This volume will introduce readers to an array of voices and perspectives, specifically those of women and international readers. The book comprises work by academics, a librarian, and the widow of Tressell’s biographer, Fred Ball. The focus is on continuity and change in terms of how Tressell’s text is read.

Revisiting Robert Tressell’s Mugsborough will be an important book for all literature collections.

Julie Cairnie is assistant professor in the School of English and Theatre Studies at the University of Guelph, Canada. She holds a PhD from York University.

Preface: Back to the Future? Rereading The Ragged Trousered Philanthropists (Jeremy Hawthorn)


Part One: The Production of the Text


Chapter 1: Re-visiting Fred Ball: Reminiscences on One of the Damned, as told by his wife, Jacquie Ball, and written down by his daughter, Clare Ball (Jacquie Ball and Clare Ball)


Chapter 2: “A Book that Belongs to Everyone”: Curating the Manuscript and Making it Accessible (Christine Coates)


Chapter 3: “In the Shadows of a Legend”: Women and the Production of The Ragged Trousered Philanthropists (Julie Cairnie)


Chapter 4: “From the Cradle to the Grave”: Bodies, Class, and Masculinities in The Ragged Trousered Philanthropists (Julie Cairnie)


Chapter 5: [Re]creation of Self, Text, and Audience: The Impact of Tressell’s Irish Roots on The Ragged Trousered Philanthropists (Marion Walls)