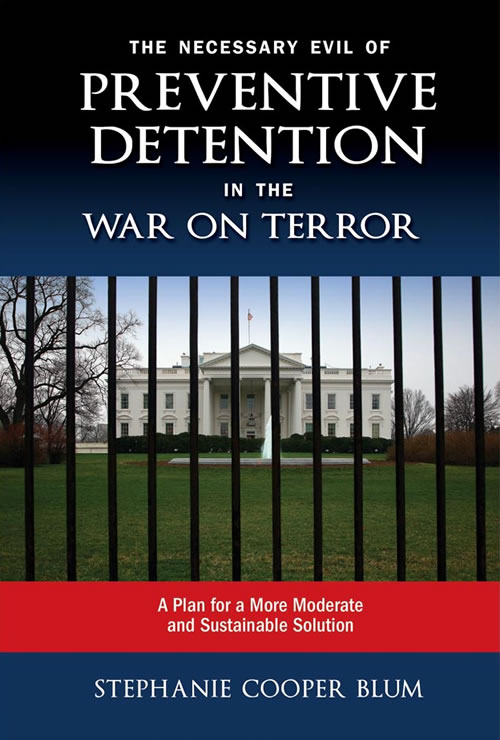 The Necessary Evil of Preventive Detention in the War on Terror: A Plan for a More Moderate and Sustainable Solution by Stephanie Cooper Blum

"Compelling and informative. If preventive detention is to be employed it must surely be done within the law and subject to open accountability. The criteria must be clear and the procedures must assure fairness. This book sets out a balanced and moderate proposal that is worthy of serious consideration." - Prof. Alan M. Dershowitz, Harvard University and author of Preemption: A Knife That Cuts Both Ways

After September 11, 2001, the Bush administration decided to detain certain individuals suspected of being members or agents of al Qaeda or the Taliban as enemy combatants and hold them indefinitely and incommunicado for the duration of the war on terror. The rationale behind this system of preventive detention is to incapacitate suspected terrorists, facilitate interrogation, and hold them when traditional criminal charges are not feasible for a variety of reasons. While the rationale for preventive detention is legitimate and the need for preventive detention real, the current administration’s approach has been reactionary, illogical, and probably unconstitutional.

Approximately 762 aliens were arrested in connection with the investigation of the September 11 attacks. Each detainee was held until specifically cleared by the FBI of any connection to terrorist activities. Most of these individuals were ultimately charged with violating immigration law such as remaining in the U.S. after the expiration of their visas or for entering the U.S. illegally. While this “hold until cleared” policy was the administration’s first approach to preventive detention, it only concerned aliens and not U.S. citizens. For citizens, the administration initially used material witness warrants under the U.S.Code 18, section 3144.

Material witness warrants are traditionally used to arrest and detain material witnesses to criminal activity when it is believed that the witnesses will leave the jurisdiction to avoid having to testify. The threshold for detention as a material witness is that the person has testimony “material” to a criminal proceeding and that securing the testimony through a subpoena is “impracticable.” After 9/11, the attorney general announced a policy of “aggressive detention” of material witnesses, and at least seventy people (including Jose Padilla and Ali Saleh al-Marri, discussed below) were detained under the rationale that they were “material witnesses” without any criminal charges filed. Under the statute, however, “[n]o material witness may be detained…if the testimony of such a witness can be adequately secured by deposition, and if further detention is not necessary to prevent a failure of justice.” As law professor Stephen Schulhofer aptly points out, unless this exception is expanded to swallow the rule, the material witness statute is a poor choice to detain terrorist suspects pending further investigation and trial. The Bush administration recognized the inherent limitations of creating a preventive detention regime using the material witness statute and transferred Padilla and al-Marri to military custody as enemy combatants in 2002 and 2003, respectively. President Bush justified his unilateral decisions to label individuals as enemy combatants on the exercise of his war power as commander in chief under article 2 of the Constitution and under the Joint Resolution passed by Congress after 9/11 to use all “necessary and appropriate force” against those who “planned, authorized, committed or aided the terrorist attacks that occurred on September 11, 2001.”

This book explores the underlying rationales for preventive detention as a tool in this war on terror; analyzes the legal obstacles to creating a preventive detention regime; discusses how Israel and Britain have dealt with incapacitation and interrogation of terrorists; and compares several alternative ideas to the administration’s enemy combatant policy under a methodology that looks at questions of lawfulness, the balance between liberty and security, and institutional efficiency. In the end, this book recommends using the Foreign Intelligence Surveillance Court to monitor a narrow regime of preventive detention only to be used under certain prescribed circumstances where interrogation and/or incapacitation are the justifications. This book is an essential reference for collections in American studies, political science, and national security studies.

Note. The views in this book are solely the author’s and do not represent the U.S. government.

"Whether you agree or disagree with preventive detention as a tactic in the war against terrorism, you will find this book compelling and informative. If preventive detention is to be employed, it must surely be done within the law and subject to open accountability. The criteria must be clear and the procedures must assure fairness. This book sets out a balanced and moderate proposal that is worthy of serious consideration." - Prof. Alan M. Dershowitz, Harvard University and author of Preemption: A Knife That Cuts Both Ways

"Stephanie Blum has written a thoughtful, well documented, and responsible analysis of the legal and policy issues bearing on the sensitive subject of preventive detention of terrorist suspects. The book will not command universal assent, but is an excellent contribution to the public debate over an issue of transcendent importance to national security and civil liberties." - Judge Richard Posner, United States Court of Appeals for the Seventh Circuit

Stephanie Cooper Blum holds a JD from The University of Chicago Law School, a BA from Yale College, and will be receiving a MA in security studies from the Naval Postgraduate School’s Center for Homeland Defense and Security in December 2008. She has worked in the private sector and served as a law clerk to three federal judges. She is currently an attorney for the Transportation Security Administration.

Chapter 3: Rationales for Preventive Detention in the War on Terror

Chapter 6: Methodology for Evaluating Alternative Regimes for Preventive Detention as a Tool in the War on Terror

Chapter 7: Beyond the Enemy-Combatant Policy: Alternative Approaches for Preventive Detention

Chapter 8: Conclusion: Congress, Where Art Thou?