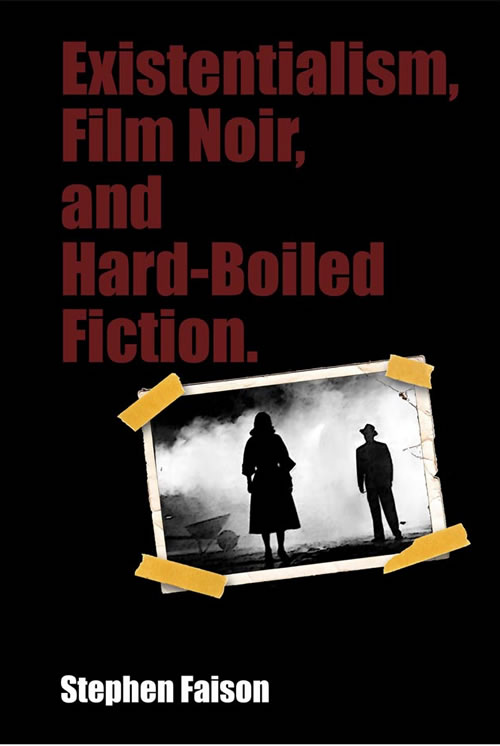 Faison effectively challenges the frequent assertion that the intellectual and creative sources of film noir are to be found in European thinkers and movements, and establishes film noir, like hard-boiled fiction, as a uniquely American phenomenon.

Film noir, and the hard-boiled fiction that served as its initial source material, represent one form of American existentialism that was produced independently of European philosophy. Hard-boiled fiction introduced the tough and savvy private detective, the duplicitous femme-fatale, the innocent victim of circumstance, and the confessing but remorseless murderer. Creators of this uniquely American crime genre engaged existential themes of isolation, anxiety, futility, and death in the thrilling context of the urban crime thriller. The film noir cycle of Hollywood cinema brought these features to the screen, and offered a distinctively dark visual style compatible with the unorthodox narrative techniques of hard-boiled fiction writers.

Film noir has gained critical acceptance for its artistic merit, and the term has a ubiquitous presence in American culture. Americans have much to gain by recognizing their own contributors to the history of existentialism. Existentialism, Film Noir, and Hard-Boiled Fiction describes and celebrates a unique form of existentialism produced mostly by and for working-class people. Faison’s analysis of the existentialist value of early twentieth-century crime stories and films illustrates that philosophical ideas are available from a rich diversity of sources.

Faison examines the plight of philosophy, which occupies a small corner of the academy, and is largely ignored beyond its walls. According to the author, philosophers do themselves and the public a disservice when they restrict what is called existentialism, or philosophy, to that which the academy traditionally approves. The tendency to limit the range of sanctioned material led the professional community to miss the philosophical importance of the critically acclaimed phenomenon known as film noir, and significantly contributes to the contemporary status of philosophy.

Existentialism, Film Noir, and Hard-Boiled Fiction properly identifies existentialism, not as the original creation of post–World War II Europeans, but as a shorthand term used to describe a compelling vision of the world. The themes associated with existentialism are found in the ancient Greek tragedies, and dramatic narrative has been the preferred conveyance of the existentialist message.

American and European philosophers present during the early decades of the twentieth century, agreed that the United States was not fertile soil for the existentialist message, but the popularity of hard-boiled fiction and film noir contradicts such claims. Faison examines and emphasizes the working-class origins and orientation of hard-boiled fiction to reveal the division between elites and working-class Americans that led to the ill-informed conclusion.

Faison effectively challenges the frequent assertion that the intellectual and creative sources of film noir are to be found in European thinkers and movements, and establishes film noir, like hard-boiled fiction, as a uniquely American phenomenon.

Existentialism, Film Noir, and Hard-Boiled Fiction is scholarly and accessible, and will appeal to academics interested in existentialism, philosophy, and interdisciplinary studies, film enthusiasts interested in the narrative and visual techniques employed in film noir, and fans of hard-boiled mystery fiction and the work of screen legends of the Hollywood studio era.

Stephen Faison is a professor at Pennsylvania State University and holds a PhD from Vanderbilt University.


Chapter 2: “You May Think You Know What You’re Dealing With” (Noah Cross, Chinatown): The Existential Epistemology of Noir


Chapter 3: “Don’t Be Too Sure I’m As Crooked as I’m Supposed to be”: The Existential Ethics of Noir


Chapter 4: “They Keep Underestimating You”: The Existential Politics of Noir