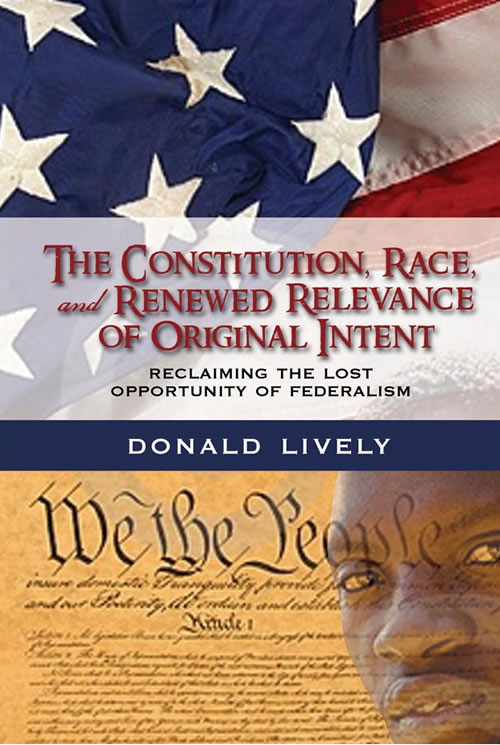 The Constitution, Race, and Renewed Relevance of Original Intent: Reclaiming the Lost Opportunity of Federalism by Donald Lively

This publication is particularly relevant at a time when racial dynamics are in flux and the law, particularly interpretation of the law, has become largely static. This book provides significant insights that increasingly will reflect understanding of racial reality in the twenty-first century.

Donald Lively brings a perspective upon constitutional fundamentals and racial reality that is both historical and forward-looking. It reflects a convergence of understandings and insights from a range of experience as a legal academic, historian, business developer, and community service organizer. He is the author of 12 books and over 50 articles, many of which relate to the interaction between the Constitution and political and social factors and circumstances. He has lectured both domestically and internationally. Three of his books have won national book awards.

Lively writes in a style that captures complex and sophisticated subject matter and reduces it to accessible and understandable terms. It is extensively annotated to authoritative sources, transcends any ideological agenda, and introduces principles that make original constitutional premises relevant to evolving conditions. Among other things, he demonstrates how the nation’s founding premises that were compromised by racism and its incidents have become relevant to reckoning with their legacy.

This publication is particularly relevant at a time when racial dynamics are in flux and the law, particularly interpretation of the law, has become largely static. Accounting for the nation’s legacy of discrimination has been sporadic and uneven. Reparations have been provided for the forced relocation of Japanese-Americans during World War II, but denied for African-Americans whose experience for most of the nation’s history was defined by slavery and pervasive discrimination. Although the Supreme Court has acknowledged this legacy of societal discrimination, it has precluded generalized remediation pursuant to concern with negative collateral consequences.

This book provides significant insights that increasingly will reflect understanding of racial reality in the twenty-first century. It demonstrates first a legacy of constitutional outcomes that, at their best, have been promising and profound in their symbolism but ultimately underachieving. The book also evidences that, for the first time in the nation’s history, market forces are aligning in favor of diversity and multicultural competence. Along with changing demographics and globalization, these factors provide a powerful new force for reckoning with the nation’s legacy of racial discrimination. Modern constitutional doctrine, which largely precludes raceconscious reckoning with this reality, constrain the market (both the public and private sector) from generating innovative and effective solutions. Lively maintains that by allowing more flexibility and being more deferential to innovation and experimentation, the Court can facilitate reckoning with historical reality and square the law in a way that is consistent with and even restores founding principles and also reflects how the future is evolving. Based upon its fidelity to original intent and responsiveness to changing societal conditions, this model offers a rare convergence of appeal to those who respectively advocate a more restrained and more active judiciary.

This book is relevant to a variety of audiences including academics, students, and persons in both the public and private sector who seek a comprehensive yet accessible narrative and analysis upon the historical interaction between law and race and its likely evolution.

"With his usual incisive and perceptive writing, Professor Lively addresses the issue of race in the context of constitutional law. His book effectively integrates historical perspective, critical insight into the present, and a sense of accelerating change in racial dynamics as the 21st century unfolds." - Russell L. Weaver, Professor of Law and Distinguished University Scholar, University of Louisville, Louis D. Brandeis School of Law


Chapter 2: Toward an Even More Perfect Union