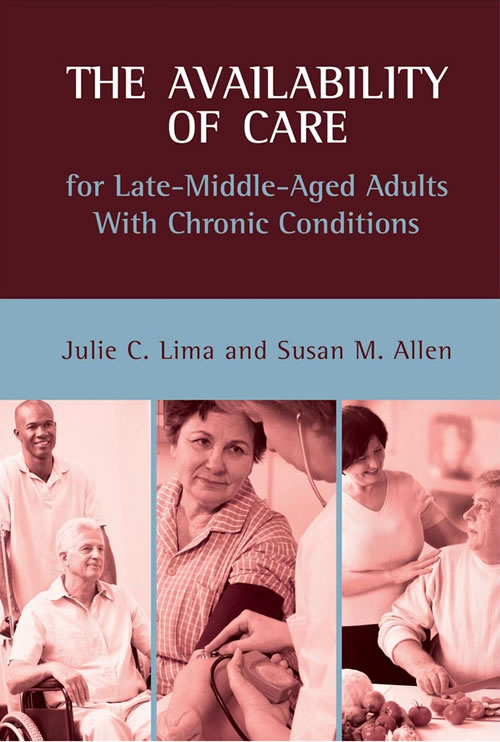 The Availability of Care for Late-Middle-Aged Adults With Chronic Conditions by Julie C. Lima and Susan M. Allen

In this first critical study of the availability and receipt of care for late-middle-aged adults, Julie Lima and Susan Allen uncover a host of vulnerabilities that challenge the wellbeing of those who find themselves in need of personal assistance at a critical point in their lives.

Among the most critical issues facing society today is the provision of community support for people of all ages who require assistance in performing daily living tasks. Researchers have documented the support systems and needs of older persons, children with special health care needs, and young persons transitioning into adulthood. While the United States may not yet have solved many of the challenges of providing adequate supports to these populations, researchers at least have a good sense of the nature of those challenges and are working toward that end.

Somewhat surprising, then, is the nearly complete lack of knowledge about the support systems and needs of a rapidly growing population of adults who are not yet considered old but who nevertheless need help due to traumatic injury, the congenital illnesses of childhood and young adulthood, and/or the early onset of chronic diseases typically associated with later life (e.g., arthritis, heart disease and cancer). Specifically, researchers know little about the millions of Americans who require assistance during the period of late middle age, a transition phase between middle age and the older years, when activity limitations associated with a chronic condition escalate sharply.

The largest generation in American history to date––the baby boom generation––has begun to enter late middle age, the oldest of whom turned sixty in 2006. While the research community looks ahead to the likely strains this generation will place on the formal long-term care system, Medicare, and the Social Security system in the near future, those who find themselves in need of personal care in late middle age must first pass through a particularly vulnerable time before they are eligible to benefit from the safety net these systems afford. Because late-middle-aged adults are often considered the “carers” of society (many caring for dependent children or aging parents, and often both), we do not often think of this group as vulnerable and in need of help themselves. They, more than others, are left to rely on their own financial and family support systems to get through their difficult time, while at the same time planning and preparing for the possibility of living another 20 years or more with chronic illnesses and conditions. Up until now, we have known very little about how, and how well, they manage.

In this first critical study of the availability and receipt of care for late-middle-aged adults, Julie Lima and Susan Allen uncover a host of vulnerabilities that challenge the wellbeing of those who find themselves in need of personal assistance at a critical point in their lives. Using a lifecourse approach, they outline the care needs of older adults in various stages of life, as well as the sociodemographic and policy trends that influence the amounts and types of care that are available, and that will likely be available in the near future. Since so little was known about the care needs of this group prior to this work, this book is largely descriptive in nature, and the authors intend for it to lay the groundwork for future work in this area.

This is an important book for all gerontology, disability, and lifecourse collections.

Julie C. Lima is a senior research analyst at the Center for Gerontology and Health Care Research in the Warren Alpert Medical School of Brown University. Trained as a social demographer with interests in aging, disability, and health disparities, she holds a PhD from Brown University, an MPH from the Boston University School of Public Health, and a BA from the University of Notre Dame. Dr. Lima has published articles in journals, including the Journal of Gerontology: Social Sciences, Journal of Child and Family Studies, and Journal of Housing for the Elderly.

Susan M. Allen is a professor of medical sciences in the Department of Community Health, and Deputy Director of the Center for Gerontology and Health Care Research in the Warren Alpert Medical School of Brown University. She holds her PhD, AM, and BA from Brown University. Dr. Allen is a medical sociologist and health policy researcher whose interests are in the fields of aging and disability. Dr. Allen has published widely in the peer-reviewed literature, including articles in The Gerontologist, Journal of Gerontology, Journal of Health and Aging, Journal of Aging and Social Policy, American Journal of Public Health, Medical Care and others.

Format of the Remaining Chapters

Risks and Consequences of Inadequate Care

Advantages of the HRS

Limitations of the HRS

Sociodemographic Characteristics of the Respondent

Characteristics of the Respondent’s Social Network

Characteristics of the Caregiving Network

Characteristics of the Two Most Prevalent Primary Caregivers: Spouses and Children


Chapter 4: The Receipt of Care

Does Their Health and Functioning Differ by Age?

Description of Receipt of Formal Care by Age

Age Differences in Network Composition in Light of Respondent Casemix

Bivariate Relationship Between Hours of Care and Age

Strengths of the Study

Limitations of the Study