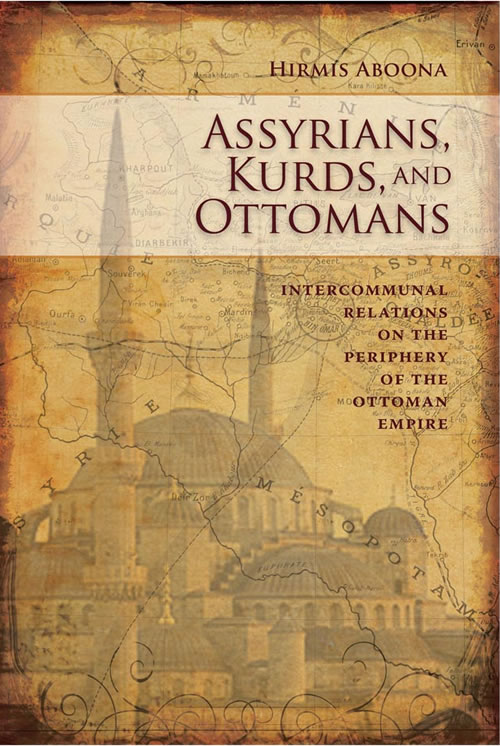 Assyrians, Kurds, and Ottomans: Intercommunal Relations on the Periphery of the Ottoman Empire by Hirmis Aboona

This work, through its rich depictions of tribal and religious diversity within Mesopotamia, steps away from the age-old oversimplified rubric of an “Arab Muslim” Middle East, and into the cultural mosaic that is more representative of the region.

Many scholars, in the U.S. and elsewhere, have decried the racism and “Orientalism” that characterizes much Western writing on the Middle East. Such writings conflate different peoples and nations, and movements within such peoples and nations, into unitary and malevolent hordes, uncivilized reservoirs of danger, while ignoring or downplaying analogous tendencies towards conformity or barbarism in other regions, including the West. Assyrians in particular suffer from Old Testament and pop culture references to their barbarity and cruelty, which ignore or downplay massacres or torture by the Judeans, Greeks, and Romans who are celebrated by history as ancestors of the West. This work, through its rich depictions of tribal and religious diversity within Mesopotamia, may help serve as a corrective to this tendency of contemporary writing on the Middle East and the Assyrians in particular. Furthermore, Aboona’s work also steps away from the age-old oversimplified rubric of an “Arab Muslim” Middle East, and into the cultural mosaic that is more representative of the region.

In this book, author Hirmis Aboona presents compelling research from numerous primary sources in English, Arabic, and Syriac on the ancient origins, modern struggles, and distinctive culture of the Assyrian tribes living in northern Mesopotamia, from the plains of Nineveh north and east to southeastern Anatolia and the Lake Urmia region. Among other findings, this book debunks the tendency of modern scholars to question the continuity of the Assyrian identity to the modern day by confirming that the Assyrians of northern Mesopotamia told some of the earliest English and American visitors to the region that they descended from the ancient Assyrians and that their churches and identity predated the Arab conquest. It details how the Assyrian tribes of the mountain dioceses of the “Nestorian” Church of the East maintained a surprising degree of independence until the Ottoman governor of Mosul authorized Kurdish militia to attack and subjugate or evict them.

Assyrians, Kurds, and Ottomans is a work that will be of great interest and use to scholars of history, Middle Eastern studies, international relations, and anthropology.

"This book will stand as lasting contribution to the history of Christianity in Asia, of the Ottoman Empire, and of one of the Middle East’s largest ethnic and religious minorities." - Hannibal Travis, Visiting Associate Professor, Villanova University School of Law, and Sargon George Donabed, University of Toronto


Chapter 1: The Homeland and Origin of the Independent Assyrian Tribes of Tiyari and Hakkari


Chapter 3: The History of the Church of the East Down to the Arrival of the Roman Catholic Missionaries


Chapter 4: Missionaries and Their Impact on the Assyrians


Chapter 7: The Reforms and the People of the Book


Chapter 8: The Beginnings of Centralisation


Chapter 9: Beirakdar and the Achievement of Centralisation


Chapter 10: The Subjection of the Assyrian Tribes in 1843


Chapter 11: Great Britain, the Ottomans, and the Assyrian Tragedy


Chapter 13: The End of the Kurdish Wars