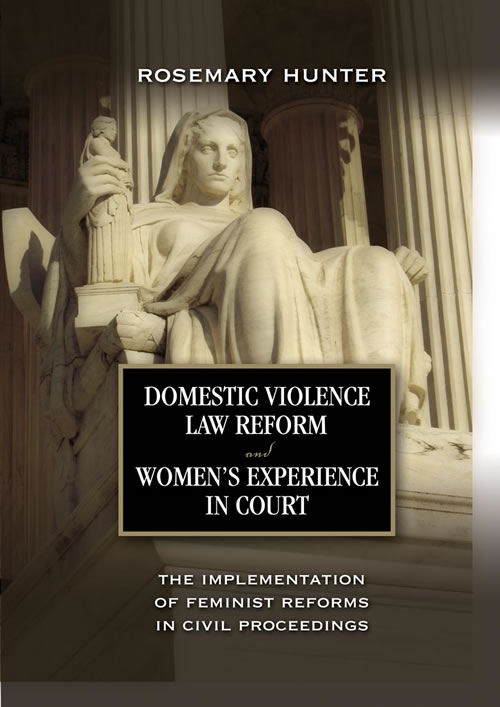 Domestic Violence Law Reform and Women’s Experience in Court: The Implementation of Feminist Reforms in Civil Proceedings by Rosemary Hunter

The fact that domestic violence is a serious and ongoing social problem has been well recognized since the women’s movement made the hitherto private experience of violence against women in the home into a political issue in the 1960s and 1970s. In Australia, a major national prevalence study of violence against women conducted by the Australian Bureau of Statistics in 1996 found that 23% of women who had ever been married or in a de facto relationship—1.1 million women—had experienced violence from their partner at some stage during the relationship.

Feminist legal scholarship, however, has highlighted the many failures of criminal law to respond adequately to women’s experiences of domestic violence. Civil remedies for violence and abuse seem to offer better possibilities: there is a lower standard of proof, and the woman is the subject of her own action rather than merely being the object of proceedings. The availability of civil remedies has, in many cases, resulted from feminist campaigns to fill the gaps in protection left by the criminal law. It has also been argued that civil actions provide scope to change public discourses and legal understandings of violence against women. Listening to women’s stories might force a revision of traditional conceptions and myths about what constitutes violence, its causes and effects, and “appropriate” reactions to it.

This study investigates the ways in which women’s experiences of domestic violence are heard and understood in civil court settings, and examines women’s experiences of telling their stories (or at least attempting to do so) in those settings. The two areas on which the study focuses are intervention order proceedings in State Magistrates’ Courts, and residence, contact, and property matters in the federal Family Court in Australia. The relevant legislation in the two jurisdictions is either partly or wholly a product of feminist legal activism. The study, therefore, seeks to determine whether the feminist claim that the criminal law silences women also pertains in the context of new civil claims specifically designed to respond to women’s experiences.

The general history and theory of law reform suggests that reforms often strike problems in the process of implementation. But because law does not operate monolithically, the exact nature of those problems is not necessarily predictable. In the context of this study, implementation problems may arise from social and legal discourses about domestic violence and about victims of violence which tend to operate constantly across the legal system, and/or they may arise from the particular rules and structures found in each institutional setting. There is thus a need for detailed examination and analysis of how these various elements operate and interact in different court settings. In undertaking this task, the study has two objectives. First, it draws conclusions about the nature of implementation problems in the two jurisdictions in order to inform future feminist activism around violence against women. Secondly, it makes a more general point about the importance of procedure in feminist legal theory and praxis. In Australia in particular, feminist legal scholars and advocates have placed a heavy emphasis on doctrinal revision and have largely ignored issues of implementation. The study argues that procedure (conceived broadly to encompass the what, where, how, and who of legal proceedings) crucially shapes women’s experience of the legal process, and is neglected by feminists at their peril.

This book will be of interest to feminist jurisprudence and law and society scholars and researchers, and to activists and advocates in the field of domestic violence.

Rosemary Hunter is Professor of Law at the University of Kent, UK. She holds the degrees of J.S.M. and J.S.D. from Stanford University, and B.A. (Hons.), LL.B. (Hons.) from the University of Melbourne, Australia. Her previous books include Indirect Discrimination in the Workplace (Federation Press, 1992), Changing Law: Rights, Regulation and Reconciliation (ed. with M. Keyes, Ashgate, 2005), Choice and Consent: Feminist Engagements with Law and Subjectivity (ed. with S. Cowan, Routledge-Cavendish, 2007), and Rethinking Equality Projects in Law: Feminist Challenges (ed., Hart Publishing, 2008).


Chapter 4: The Discourse of Intervention Orders


Chapter 7: The Jurisdictional Intersection: Intervention Orders in the Family