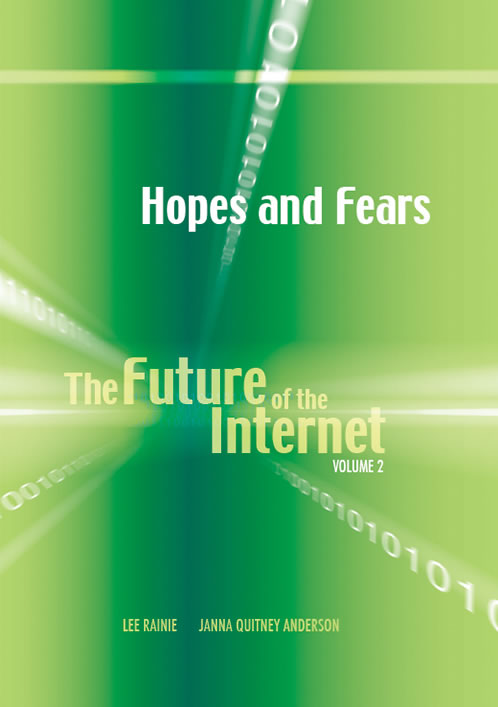 Hopes and Fears: The Future of the Internet, Volume 2 by Lee Rainie and Janna Anderson

Technology builders, entrepreneurs, consultants, academicians, and futurists from around the world share their wisdom in The Future of the Internet surveys conducted by the Pew Internet & American Life Project and Elon University. The series of surveys garners smart, detailed assessments of multi-layered issues from a variety of voices, ranging from the scientists and engineers who created the first Internet architecture a decade ago to social commentators to technology leaders in corporations, media, government, and higher education. Among the respondents are people affiliated with many of the world's top organizations, including IBM, AOL, Microsoft, Intel, ICANN, the Internet Society, Google, W3C, Internet2, and Oracle; Harvard, MIT, and Yale; and the Federal Communications Commission, FBI, U.S. Census Bureau, Social Security Administration, and U.S. Department of State. They provide significant and telling responses to questions about the future of government, education, media, entertainment, commerce, and more. They foresee continuing conflicts over control of networked communications and the content produced and shared online. They also predict the major changes ahead for everyone in every field of endeavor.

Hopes and Fears: The Future of the Internet, Volume 2

The 2006 Future of the Internet II survey asked its participants to react to variety of networked information technology scenarios related to national boundaries, human languages, artificial intelligence and other topics. Among the questions implicit in the scenarios were: Will more people choose to live "off the grid"? Will autonomous machines leave people out of the loop? Will English be the lingua franca? Will national boundaries be displaced by new groupings? Among the themes in the predictions: Continued serious erosion of individual privacy; the improvement of virtual reality and rising problems tied to it; greater economic opportunities in developing nations; changes in languages; the rise of autonomous machines that operate beyond human control.

Janna Anderson is an associate professor at Elon University’s School of Communications and the director of Imagining the Internet, a Webby Honors-winning online compilation of survey studies and documentary videos illuminating the future of the internet. This project, launched in 2003, is where the Future of the Internet studies were first introduced. She has written articles for USA Today, Advertising Age, and the New York Times News Service and is author of the book Imagining the Internet. She serves on the editorial board of Newspaper Research Journal, is a reviewer for New Media & Society, and is a contributor to State of the Future reports. She is the winner of several national and international awards for web design and content.

Scenario 3: Autonomous Technology Is a Problem