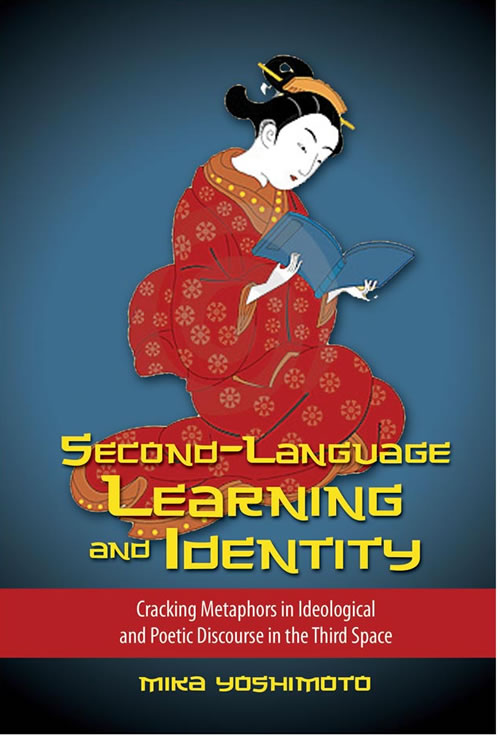 Second Language Learning and Identity: Cracking Metaphors in Ideological and Poetic Discourse in the Third Space by Mika Yoshimoto

“Among the reasons why this book is recommended is that it encourages us to rethink and to react to the impact of the ideology conveyed through language use in our daily communication.” – JALT Journal

This book is largely about second language learning and identity construction. It is based on a unique hybrid design of case study and autoethnography. In addition, the diary study employed plays an important role in allowing the participants in the study to express themselves in a self-reflective way. The author examines and discusses with the participants of her research the everyday struggles of Japanese women in Canada who are trying to learn English. Of particular interest to this study was the role of metaphor in language which constructs our conceptual framework in a manner consistent with sociocultural theory and critical theory. Also, Foucault’s discourse theory plays a prominent role, particularly with regard to diaries, interviews, and group meetings, in that it sees identity and discourse as being profoundly interrelated and inseparable. Thus, by examining discourse, one can become more aware of changes in identity.

With regard to the context of this study in relation to other research, the author believes that there is a significant connection to Bonny Norton’s notion of investment rather than motivation with regard to how invested a second language learner feels in his or her studies. Also, Hongyu Wang, who writes extensively in the style of autoethnography, helped the author understand her journey that generated feelings of exclusion, repression, and alienation. Bakhtin’s notion of multiple voices was also very important to the author as she discussed identity as constantly shifting, layered voices in multiple contexts.

In second language learning research, there is very little attention paid to the perspective of the learner with regard to his or her feelings and identity. Most other research in this area looks at particular linguistic functions such as syntax, morphology, and so forth.

This research is also a documentation of the author’s personal journey as she was a participant in her own research. Additionally, the importance of narratives is something that the author found was largely ignored in second language research. For this reason, the author ensured that it was central to her work.

When the author first began this research, her aim was to help Japanese women who were studying English understand the changes in identity that they were experiencing. However, as her research progressed, she saw that this research would benefit all students pursuing a second language, all teachers of second languages, as well as researchers in SLA and curriculum theorists.

The use of haiku throughout the book is a particularly unique reflection of poetic discourse. Autoethnography has also recently grown in popularity in terms of its use in research, and it is used extensively throughout this work. The use of the liminal space, doubling space, in-between space, Third Space notion in the exploration of identity and its transformation in this work is also quite interesting. Through this research, the author has uncovered a profound connection between language and identity. For Japanese women, learning English is both liberating and unsettling.

This beautifully written work will be an important book for all involved in second language learning, including curriculum theorists as well as researchers concerned with connections between language and identity, poetic inquiry and discourse, narrative theory, and autoethnography.

“This book is recommended for three reasons: First, the sheer volume of empirical material provides the reader with an understanding of the process of learning English for female Japanese learners in both Japanese and English-speaking contexts. Second, Yoshimoto’s attempt to integrate the Japanese poetic writing style of haiku into a so-called western academic writing style provides a means of capturing the complicated relationship between identity and second language learning. Most importantly, this book encourages us to rethink and to react to the impact of the ideology conveyed through language use in our daily communication.” – JALT Journal

Mika Yoshimoto is a Japanese Instructor at Carleton University. She holds a PhD in Education from the University of Ottawa, an MA in Applied Linguistics from Carleton University and a BJ from Sophia University. Dr. Yoshimoto has also been published in Transnational Curriculum Inquiry. Originally from Japan, she came to Canada at the age of fifty to conduct graduate studies in English and is particularly interested in research involving second language learning, identity and autoethnography. She writes about her life, using Japanese/English haiku to express the in-between experience of living both in Japan and Canada.

Chapter 5: Narrative Self: What Stories of Japanese Students Emerge in the

Chapter 7: Troubling the Authorial Self: What Does it Mean for a Japanese Woman to Study English?