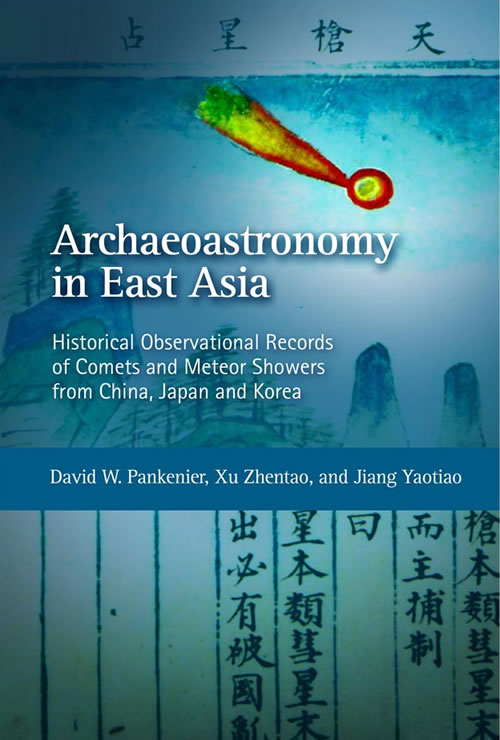 “A spectacular follow-up [to an earlier work] with the same high quality and the same excellent expertise … an important source of data and inspiration for a much wider circle of scholars for whom the historical study of astronomy is limited by language barriers.” –Journal for the History of Astronomy

Since Comet Shoemaker-Levy 9’s spectacular bombardment of Jupiter in July 1994, astronomers have devoted increasing attention to the risks of objects entering the inner solar system at irregular intervals (so-called Near-Earth Objects or NEOs and Fast-Moving Objects or FMOs). These include comets, meteors, and asteroids, mainly debris left over from the formation of the solar system. During the past few decades an accumulation of evidence has made it abundantly clear that impacts by Near-Earth Objects have played a major role in shaping the history of the Earth. The dinosaurs as well as nearly three-quarters of all species in existence 65 million years ago appear to have been wiped out by the impact in the Yucatan of an object with an estimated diameter up to ten-kilometers. North American megafauna may have met a similar fate at the end of the last Ice Age. The 1908 Tunguska event in Siberia, recently declassified United States Air Force data on objects entering Earth’s atmosphere, and the discovery of increasing numbers of eroded impact craters on the Earth, all demonstrate that collisions with NEOs pose a real and present danger. As a result, the study of historical records has assumed greater importance as a way of advancing research; for example, into the dynamic evolution of the orbits of short-period comets.

Modern astronomical research has demonstrated that meteor showers are a consequence of the disintegration of short-period comets in much like Comet Shoemaker-Levy 9. For example, it is known that the August Perseid meteors move in the same orbit as Comet Swift-Tuttle, the Leonids follow that of Comet Tempel-Tuttle, and the May Aquarids follow that of Comet Halley. A great shower of Leonids was reported in AD 931, and Chinese records for that epoch clearly reflect the 33-year period of such storms. At the same time, meteor streams and their periodic encounters with the Earth have played an important role in the geological and biological history of our planet. Here the historical records of comets and meteor showers from China, Japan, and Korea have the potential to make a contribution to historical research on the evolution of earth-crossing orbits.

Substantial numbers of East Asian cometary records have been translated in the past and published in scattered sources. As a result, selection criteria have varied and the quality of the translations has been uneven; in some cases amounting to a composite paraphrase of different records. Primary and secondary sources have not been carefully distinguished. In contrast to other compilations of this kind, this collection provides the original records in Classical Chinese for every observational record translated. Readers who are so inclined may consult the original language. The translations strive to be as faithful as possible to the plain meaning of the original sources. The authors endeavored to be as thorough as possible in culling the observational reports from a wide array of primary sources, including standard histories, local gazetteers, and private writings. No other comparable catalogue of meteor shower observations exists in translation. In the case of the cometary records, although many have been published in the past, there are gaps in the record and a rigorous distinction has not always been made between comets and supernovae, both often being denoted by the Chinese term “guest star.” For convenience, cross-references are provided to earlier translations. In every case, the authors have checked the primary source, re-translated the record to assure accuracy and consistency, and made note of errors or omissions detected in previous versions. To facilitate future research on orbital evolution, it was necessary to establish new rigorous selection criteria in order to collect all the potentially useful records. The original records of Chinese, Japanese, and Korean observations that conform to these selection criteria were then checked in various ways and their dates converted to the Western calendar.

Until now, important research on the historical records of comets and meteor showers from China, Japan, and Korea has remained the exclusive preserve of those with expertise in the relevant languages. With a compilation like the present volume the authors hope to ameliorate that situation. Applying the same rigorous selection criteria and style of presentation as in the previous catalogue, assembled and translated here are some 1,500 additional observations of comets and meteor showers from China, Japan, and Korea spanning nearly three millennia. With the publication of this volume, most of the important historical records of East Asian astronomical observations are now accessible in English. The introductions and appendices provide all the required information on specialized terminology, recording conventions, and nomenclature the reader will need to make use of the records.

In addition to being an invaluable resource for professional astronomers, East Asian astronomical records have materially aided the research of scholars in fields as diverse as mythology, medieval iconography, ancient chronology, and the oral history of pre-literate societies. The book should be of great interest to cultural astronomers, as well as to those engaged in historical and comparative research.

“A spectacular follow-up [to an earlier work] with the same high quality and the same excellent expertise … an important source of data and inspiration for a much wider circle of scholars for whom the historical study of astronomy is limited by language barriers.” –Journal for the History of Astronomy

"The connection between astronomical phenomena and epoch-making political and military events in China has long been recognized as rooted in strong cultural and religious beliefs. Starting in the 19th century, these accounts of "broom stars" and "stars raining down at night" have also caught the eye of astronomers, who quickly identified some with well known comets, such as comet 1P/Halley, and with known meteor showers, such as the Perseids and Leonids. In recent years, this data has gained new interest because of the increasing capability of computers. The accounts have been used to trace Perseid parent comet 109P/Swift-Tuttle and Leonid parent comet 55P/Tempel-Tuttle back in time and greatly improve their orbits, which in turn has made it possible to calculate the exact location of dust ejected in these past returns. As a result, we now can predict the return of Leonid and Perseid storms and outbursts and identify many of the past storms as due to dust ejected in particular returns of the comet. For example, we now know that "a myriad stars moved erratically" over Japan and China on 1002 AD October 14 because of dust ejected in 935 AD by comet 55P/Tempel-Tuttle, two orbits earlier. Before our eyes, legendary accounts of "stars fell like rain" from the time of emperors and court astrologers became historical accounts of astronomical events. This new compendium by Pankenier, Xu, and Jiang makes these past accounts accessible to modern astronomers, amateurs and professionals alike." - Dr. Peter Jenniskens, Research Scientist with the Carl Sagan Center at the SETI Institute, working on mission projects at NASA/Ames Research Center.

David Pankenier is professor of Chinese at Lehigh University. He holds a PhD and MA in Asian Languages from Stanford University, and an MA from the University of Stockholm. Dr. Pankenier is coauthor of the first volume of East Asian Archaeoastronomy (2000) and author of Revealing the Secrets of Ancient Chinese History (2008). He has published numerous articles on ancient Chinese astronomy, astrology, and intellectual history.

1.2. Notes on the Translations

1. Chinese and Western Names of Stars and Asterisms