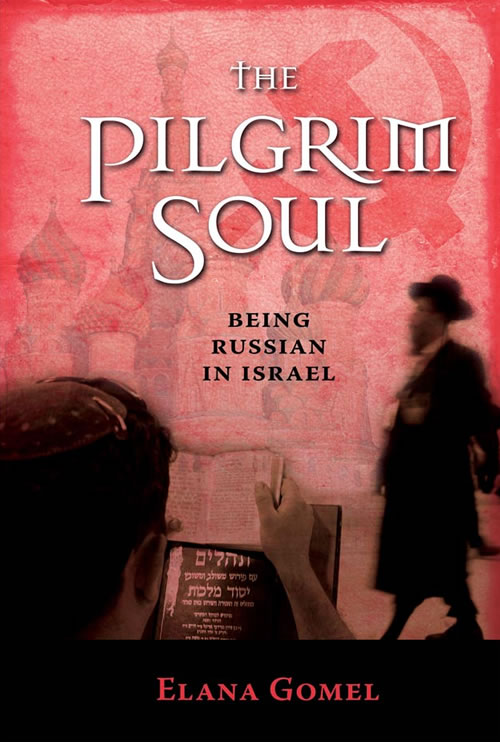 The Pilgrim Soul: Being Russian in Israel by Elana Gomel

Written by Elana Gomel, senior lecturer at Tel-Aviv University, this is an original and exciting investigation of the Russian community in Israel. It analyzes the narratives through which Russian Jewry defines itself and connects them to the legacy of Soviet history.

One of the most astounding aftershocks of the collapse of the Soviet Union was the massive immigration of Russian Jews to Israel. Today, Russian speakers constitute one-sixth of Israel’s total population. No other country in the world has absorbed such a prodigious number of immigrants in such a short period. The implications of this phenomenon are immense both locally (given the geopolitical situation in the Middle East) and globally (as multicultural and multiethnic states become the rule rather than the exception). For a growing number of immigrants worldwide, the experience of living across different cultures, speaking different languages, and accommodating different––and often incompatible––identities is a daily reality. This reality is a challenge to the scholar striving to understand the origin and nature of cultural identity. Languages can be learned, economic constraints overcome, social mores assimilated. But identity persists through generations, setting immigrants and their children apart from their adoptive country.

The story of the former Russians in Israel is an illuminating example of this global trend. The Russian Jews who came to Israel were initially welcomed as prodigal sons coming home. Their connection to their “historical motherland” was seemingly cemented not only by their Jewish ethnicity, but also by a potent Russian influence upon Zionism. The first Zionist settlers in Palestine were mostly from Russia and Poland, and Russian literature, music, and sensibility had had a profound effect upon the emerging Hebrew culture. Thus, it seemed that while facing the usual economic challenges of immigrations, the “Russians,” as they came to be known, would have little problem acclimatizing in Israel.

The reality has been quite different, marked by mutual incomprehension and cultural mistranslation. While achieving a prominent place in Israeli economy, the Russians in Israel have faced discrimination and stereotyping. And their own response to Israeli culture and society has largely been one of rejection and disdain. If Israel has failed to integrate the newcomers, the newcomers have shown little interest in being integrated.

Thus, the story of the post-Soviet Jews in Israel illustrates a general phenomenon of cultural divergence, in which history carves different identities out of common stock. Besides marking a turning point in the development of Israel, it belongs to the larger picture of the contemporary world, profoundly marked by the collapse of the catastrophic utopias of Nazism and Communism. And yet this story has not adequately been dealt with by the academy. There have been relatively few studies of the Russian immigration to Israel and none that situates the phenomenon in a cultural, rather than purely sociological, context.

Elana Gomel’s book, The Pilgrim Soul: Being Russian in Israel, is an original and exciting investigation of the Russian community in Israel. It analyzes the narratives through which Russian Jewry defines itself and connects them to the legacy of Soviet history. It engages with such key elements of the Russian-Israeli identity as the aversion from organized religion, the challenge of bilingualism, the cult of romantic passion, and even the singular fondness for science fiction. It provides factual information on the social, economic, and political situation of the Russians in Israel but relates the data to an overall interpretation of the community’s cultural history. At the same time, the book goes beyond the specificity of its subject by focusing on the theoretical issues of identity formation, historical trauma, and utopian disillusionment.

An earlier version of this book has been published in Hebrew by one of the largest presses in the country, Kinneret-Zmora-Beitan. It occasioned a great deal of media interest and significantly impacted the public discourse in Israel.

The Pilgrim Soul is an important book for all collections in cultural studies, ethnic and immigrant studies, Israeli studies, and Soviet studies. It will appeal to a variety of readers interested in the issues of immigration, multiculturalism, and identity formation.

Elana Gomel is a senior lecturer at the Department of English and American Studies of Tel-Aviv University, which she chaired for two years. Dr. Gomel received her PhD from Tel-Aviv University and was a recipient of the Fulbright Postdoctoral Fellowship, which enabled her postdoctoral studies at Princeton University. She was a visiting scholar at Stanford University and the University of Hong Kong. She is the author of Bloodscripts: Writing the Violent Subject, We and You: Being a Russian in Israel, and many articles on science fiction, narrative theory, and cultural poetics published in Textual Practice, Narrative, Science-Fiction Studies, Utopian Studies, and other journals.


Chapter 1: A Tale of Three Utopias


Chapter 4: The Man From the Yellow Star


Chapter 6: The Tsunami of Faith


Chapter 7: The Loves of Europa