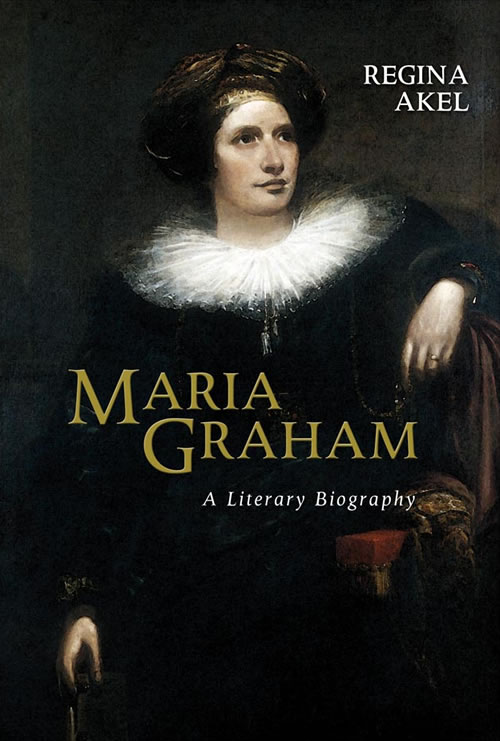 Praised by the Times Higher Education , this first literary biography of the well-known travel writer, Maria Graham, reconstructs her literary image employing significant passages from all her work. It illuminates a groundbreaking female intellectual who captured for her readers the ancient culture of India as deftly as she represented bandits in Italy and South America.

Maria Dundas was born in Papcastle (Lake District) in 1785, and after living with relatives in Richmond, she moved to Scotland where she remained until 1808. That year she sailed to India with her father, whom she had not seen for the past ten years. At this stage in her life, the travel writer was born. She then married Lieutenant Thomas Graham in India at the end of 1809 and returned home after two years. They traveled to South America, and her husband passed away during this journey. She chose to remain in South America where she met leaders of the government, prominent members of society, and British naval officers who were in the country helping to consolidate its independence from Spain. During her stay in South America (1821–1825), she wrote and published two journals, the Journal of a Residence in Chile and the Journal of a Voyage to Brazil. After her return to Britain, she also wrote and published history books for children, books on art, articles for John Murray’s newspaper, the Representative, and even a treatise on botany.

In Chile, one of the two Latin American countries she wrote about in 1824, Maria Graham is a well-known figure whose journal is periodically reissued, quoted, and discussed. In Brazil, the other country she visited and wrote about, Graham is known as a scholar and travel writer in academic circles, and as a gay icon in popular culture. Additionally, one of her two published journals about India is widely read in the United Kingdom and the United States today, and in all these countries, Graham’s work is subject to theses, conferences, and chapters in academic publications that deal with travel writing, women’s studies, or colonial studies.

Maria Graham’s story is as remarkable as her work, and this biography not only narrates her life but also delves into the representation she made of herself in her published and unpublished journals, diaries, memoirs, and letters. The result of her endeavours is a literary persona that appears far removed from the controversial woman that she actually was.

Who is the woman behind the texts? How did she conceive them? Was she simply one of many other adventurous and articulate female authors of the nineteenth century, or did she for some reason stand apart? This book shows how she manufactured her identity at times by conforming to, challenging, or ignoring the rules of society regarding women’s behaviour. She was a child of the Enlightenment in that she valued knowledge above all things, yet she flavoured her discoveries with a taste of romanticism. Her search took her to distant lands where she captured for her readers foreign cultural manifestations, exotic landscapes, and obscure religious rites; yet a reading of her work generates the impression that despite the dramatic descriptions of peoples and places, Graham’s subject was, simply, herself. What we know of her story comes mainly from her own narratives, although there are significant letters to, from, and about her that round up the analysis.

This biography reconstructs Maria Graham’s literary image by means of significant passages of her work, memoirs, diaries, journals, and letters. The chosen texts are meant to illustrate salient features of her style and of her interaction with the prevalent ideologies of her time. The intention is to display a groundbreaking female intellectual who captured for her readers the ancient culture of India as deftly as she represented bloodthirsty bandits in the north of Italy or nascent countries in South America.

Regina Akel holds a PhD in English literature from the University of Warwick and taught English literature at the Catholic University of Chile for many years, where she was also head of the Department of Translation. Her other publications include ‘Chile’ for the book Teen Life in Latin America and the Caribbean published by Greenwood Press, and a translation into Spanish Heart of Darkness (El corazón de las tinieblas) by Joseph Conrad, published in Santiago de Chile by Editorial ZigZag. In 2003 she translated into Spanish Animal Farm (Rebelión en la granja) by George Orwell which was also published by ZigZag.

Chapter 2: A Voyage to India

Chapter 3: A Vision of India