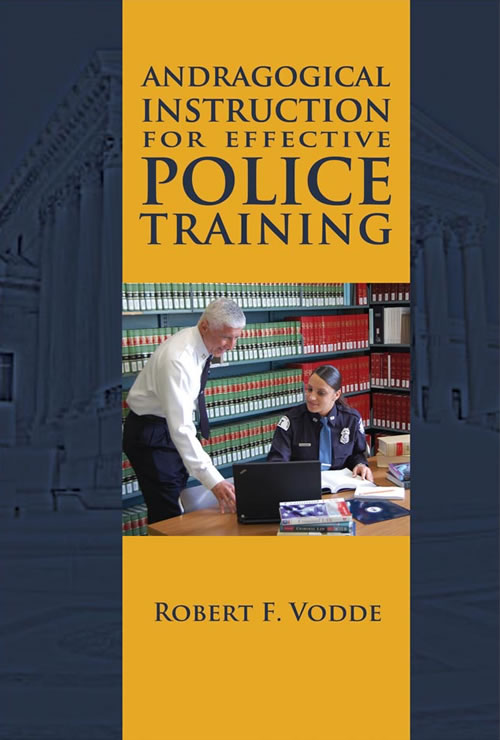 This groundbreaking book details a two-year study that examined and compared the efficacy of an andragogical instructional methodology to that of a traditional, pedagogical, militaristic format of basic police training.

America’s response to the role of police during the course of its history has ranged from one of praise and exaltation to contempt and distrust. While many factors have contributed to their quest for maintaining social order and control, the means by which police departments have been organized and its officers recruited and trained have undoubtedly undermined the success and realization of their mission. To meet the unprecedented challenges that America’s police face in the 21st century, the training of its officers plays a critically important role. The influence and residual effects of its history, however, continues to inhibit, and at times, undermine the need for change.

The significance of understanding its past, however, will give way to much-needed reforms. The history of America’s police and the means by which they have been trained reflect the four eras in which they have evolved: The Colonial, Political, Reform, and Community Policing––each of which reflects the needs, interests, and demands of a changing society. The influence of the Progressives of the late 19th and early 20th century, which gave way to the Reform Era of Policing (1930–1970), placed a strong emphasis on law and order, and “professionalism.” While this era addressed much-needed reforms at the time, its influence continues to permeate current day policing––often to the detriment of the police organization and society at-large.

Modern day police training, notwithstanding incremental changes, continues to reflect the influence of the Reform Era––one that has been characterized by employing a traditional, prescriptive, pedagogical, and militaristic methodology. Not only is this form of training contrary to the needs and interests of a rapidly, ever-changing and sophisticated constituency, but it undermines the actualization of skills and competencies required of today’s police officers.

This book details a 2-year study that examined and compared the efficacy of an andragogical instructional methodology to that of a traditional, prescriptive, pedagogical, and militaristic format of basic police training. The study not only revealed that an andragogical approach yielded greater outcomes in terms of skills and competencies, but was preferred among recruits, in great part due to the emphasis placed on experiential learning and a collegiate and collaborative approach to learning. In his research, Robert F. Vodde identified six thematic, categorical constructs by which basic police training programs can be organized and administered, to include the importance for not only working within a quasi-military hierarchal organizational structure, but in preparing recruits for the emotional and physical challenges associated with police work. When properly administered, an andragogical approach represents a well-planned and skillfully orchestrated process that holistically integrates all aspects of the curriculum; one that capitalizes on the use of multi-sensory, experiential, hands-on learning activities that allow recruits to apply what they have learned.

Considering the short and long-term impacts of basic police training, Vodde illuminates in this book that “an andragogical instructional methodology serves as a pragmatic, effective, and responsive approach to training”; it is one that creates a physical and psychological climate that takes into consideration the affective needs of the recruit, thus providing for a healthy, engaging, challenging, and collaborative atmosphere in which future police officers “develop a clear understanding and perspective of their role within the greater context of society.”

Robert F. Vodde serves as Director of the School of Criminal Justice and Legal Studies at Fairleigh Dickinson University. He holds a PhD from the University of Leicester, an MA from John Jay College of Criminal Justice, an MPA from Fairleigh Dickinson University, and a BS from William Paterson University. Before entering academia, Dr. Vodde enjoyed a 25-year career in law enforcement where during his last 10 years of service, he served as Chief of Police. A graduate of the FBI National Academy, Dr. Vodde continues to instruct, consult, and study police academies.

Background of the Problem

The Institutionalization of American Policing

Statement of the Problem

The Origins of Andragogy

Part I: Qualitative Analysis and Findings

Descriptive Analysis and Findings of Questionnaires