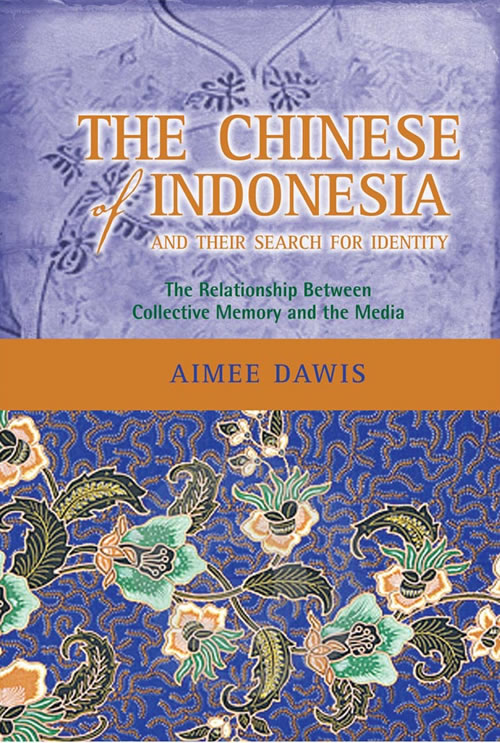 The Chinese of Indonesia and Their Search for Identity: The Relationship Between Collective Memory and the Media by Aimee Dawis

"Aimee’s study has rightly shown the plurality of Chinese Indonesians, and this study offers valuable insights to the complicated dynamics, in which Indonesians, of diverse and often hybrid backgrounds, continue to redefine themselves and their place in nation building." - Professor Melani Budianta, University of Indonesia

This book examines how the Indonesian Chinese who were born after 1966 negotiate meanings about their culture and identity through their collective memory of growing up in a restrictive media environment that specifically curtailed Chinese language and culture. The restrictive media environment was the result of a series of policies administered during the Suharto era (1965–1998). According to the regulations, the Indonesian government closed all Chinese-language schools and prohibited the use of Chinese characters in public places, the import of Chinese-language publications, and all public forms and expressions of Chinese culture.

Through a series of focus group sessions conducted in Jakarta, Indonesia, the author found that despite the restrictions, the Chinese Indonesians she interviewed still found ways to seek and/or practice aspects of Chinese culture. She also learned that all of her respondents enjoyed watching Chinese films/series as they were growing up. These media provided her respondents with a common cultural reference that allowed them to connect to a ‘mythic homeland’ that they would never have experienced otherwise. By watching the Chinese films/series, they could escape to the ‘imagined dreamland’ where they were able to borrow fragments of identity from Chinese role models (such as the heroes and heroines from martial arts serials) that were suppressed and therefore absent from the Indonesian media landscape. In this way, the media provided them with the role models they needed as they searched to comprehend their identity as young Chinese individuals.

In the past century, and particularly in the past decade, much attention has been given to China and its rising status as a world economic power. Scholarship on overseas Chinese has also shed light on their relationship with their ‘mythic homeland’, China. In their work, scholars discovered that the Chinese of Southeast Asia have created a prominent economic, political, and cultural presence in countries such as Indonesia, Malaysia, and Singapore. In the 1960s, scholars such as George Kahin, Ruth McVey, and Benedict Anderson were drawn to the political upheavals in Indonesia and the various roles that the Chinese of Indonesia have played in the economic, political, and cultural arenas of their country. In later years, Charles Coppel and Leo Suryadinata have published extensively on various aspects of the Chinese in Indonesia, such as their religious affiliations and education.

Despite the considerable attention given to the Chinese of Indonesia, scholars have not specifically studied, through the lens of the media, how a certain group of Chinese Indonesians grew up in a restrictive media and cultural environment during the 33 years when Indonesia was ruled by Suharto. This book takes the first step in examining this generation’s collective memory of growing up in a state-controlled environment that has had a significant impact on their identity formation, maintenance, and the (re)negotiation of ‘Chineseness’ in their everyday lives.

As the author delved into her respondents’ memories of living during Suharto’s New Order, she discovered the frequent intersections between the micro politics of everyday identity struggles and the macro politics of structural change. Despite the constraints the government placed on Chinese culture, they were still able to seek Chinese films and series. It was through these films and series that her respondents found the Chinese role models that were absent from their childhood and adolescence in the restrictive media environment where they grew up. In this respect, this study contributes a way of understanding how the media can be a bridge to connect the sociological tension between structural constraints and human agency.

This study also shows the immense power that the media has to convey feelings of pride, awe, and desire for things that media consumers such as the author’s respondents have never actually experienced. In listening to her respondents’ stories, the author discovered her respondents’ “kalah dan salah” (always losing and being in the wrong) mentality whereby they considered themselves to be truly Indonesian, but were still discriminated against in times of political upheavals and on a daily basis. The imported media thus presented them with a form of ‘imagined security’ where China and other places such as Taiwan and Hong Kong become a ‘desired Other’ where they would not have to fear for their safety. They also looked to these media with a longing to live in an environment where their safety would be assured and their Chinese identity would not be questioned.

"Aimee’s study has rightly shown the plurality of Chinese Indonesians, and this study offers valuable insights to the complicated dynamics, in which Indonesians, of diverse and often hybrid backgrounds, continue to redefine themselves and their place in nation building." - Professor Melani Budianta, University of Indonesia

"Being educated and having lived many years overseas herself, Aimee, who is in the same age bracket as her respondents, is not your typical Chinese-Indonesian. She has been exposed to the outside world and has absorbed different cultures. Her decision to pick up this theme is a testament to her intellectual courage and a strong desire to find her own identity, a very sound urge. As she says in the book, she has met with a multitude of challenges, one of which was to avoid over-identifying herself as a member of the very group she was studying. This kind of study should be encouraged across all ethnic groups in Indonesia as it helps solidify rather than undermine the nation's unity." - The Jakarta Post


Chapter 1: Mapping the Terrain of Identity, Memory, and the Media

The Overseas Chinese and their Place in the World

Identity, Memory, and the Media: The Case of Chinese-Indonesians

The Totok and the Peranakan

Beyond Categories: The Slippery Task of Identifying Chinese-Indonesians

Assimilationist Policies, Culture, and the Media


Chapter 4: The Indonesian Chinese and the Media: Identity Construction and Rearticulation of ‘Chineseness’ in Diaspora

From Golden Spoons to Mah Jong: A Diversity of Experiences

Implications and Suggestions for Future Research


Epilogue: The Future of Chinese Indonesians