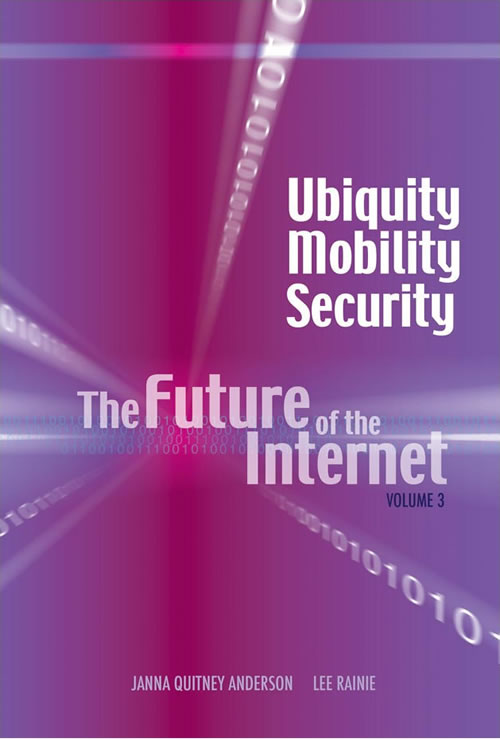 Ubiquity, Mobility, Security: The Future of the Internet, Volume 3 by Janna Quitney Anderson and Lee Rainie

This volume showcases the responses of technology stakeholders and critics who were asked to assess scenarios about the future social, political, and economic impact of the Internet. This book is critical for those in communication and Internet studies.

About the series: Technology builders, entrepreneurs, consultants, academicians, and futurists from around the world share their wisdom in The Future of the Internet surveys conducted by the Pew Internet & American Life Project and Elon University. The series of surveys garners smart, detailed assessments of multilayered issues from a variety of voices, ranging from the scientists and engineers who created the first Internet architecture a decade ago to social commentators to technology leaders in corporations, media, government, and higher education. Among the respondents are people affiliated with many of the world’s top organizations, including IBM, AOL, Microsoft, Intel, ICANN, the Internet Society, Google, W3C, Internet2, and Oracle; Harvard, MIT, and Yale; and the Federal Communications Commission, FBI, U.S. Census Bureau, Social Security Administration, and U.S. Department of State. They provide significant and telling responses to questions about the future of government, education, media, entertainment, commerce, and more. They foresee continuing conflicts over control of networked communications and the content produced and shared online.

Ubiquity, Mobility, Security: The Future of the Internet, Volume 3: Based on the third canvassing of Internet specialists and analysts by the Pew Internet & American Life Project, this volume showcases the responses of technology stakeholders and critics who were asked to assess scenarios about the future social, political, and economic impact of the Internet. Some 578 leading Internet activists, builders, and commentators responded in this survey to scenarios about the effect of the Internet on social, political, and economic life in the year 2020. An additional 618 stakeholders also participated in the study, for a total of 1,196 participants who shared their views. The insights garnered in the study included predictions made on the role and importance of mobile devices, the transparency of people and organizations, talk and touch user interfaces with the Internet, the challenges of sharing content while trying to perfect intellectual property law and copyright protection, divisions between work and personal time given the blurring of physical and virtual reality, and the “next-generation” engineering of the network to improve the current Internet structure.

Janna Anderson is an associate professor at Elon University’s School of Communications and the director of Imagining the Internet, a Webby Honors–winning online compilation of survey studies and documentary videos illuminating the future of the Internet. This project, launched in 2003, is where the Future of the Internet studies were first introduced. She has written articles for USA Today, Advertising Age, and the New York Times and is author of the book Imagining the Internet. She serves on the editorial board of Newspaper Research Journal, is a reviewer for New Media & Society, and is a contributor to State of the Future reports. She is the winner of several national and international awards for Web design and content.

Scenario 2: The Internet and the Evolution of Social Tolerance

Scenario 3: The Evolution of IP Law and Copyright Protection

Scenario 5: The Evolution of Augmented Reality and Virtual Reality

Scenario 6: The Evolution of the Internet User Interface

Scenario 7: The Evolution of the Architecture of the Internet

Scenario 8: The Evolving Concept of Time for Work and Leisure