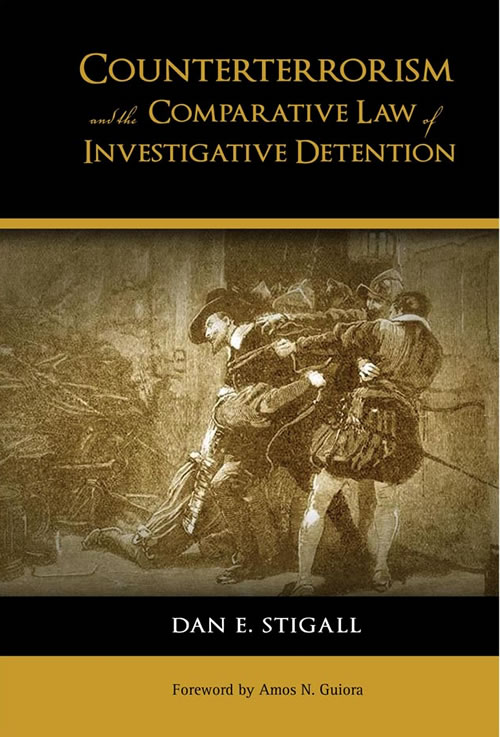 Counterterrorism and the Comparative Law of Investigative Detention by Dan Stigall

This book is the first focused look at the concept of investigative detention and counterterrorism, and is the first to analyze in detail the comparative law of investigative detention in the United States, the United Kingdom, and France. It is an important book for all those who study comparative law, national security, and counterterrorism, and for policymakers and those seeking solutions to complex problems involving detention of terrorist suspects.

The years since the devastating attacks of September 11, 2001, have seen dramatic developments in the recognized challenges to U.S. national security and in the ways the United States reacts to terrorist threats. Those reactions have demonstrated both the flexibility and limitations of U.S. criminal law in its ability to adapt to terrorism. A focus on the perceived limitations of U.S. criminal law in this regard has led to calls from key players within the U.S. national security apparatus for an improved regime of investigative detention, such as those currently in place in the United Kingdom and France.

Counterterrorism and the Comparative Law of Investigative Detention is an important book for all those who study comparative law, national security, and counterterrorism. It is also an ideal book for policymakers and those seeking solutions to complex problems involving detention of terrorist suspects.

“A must read and a breakthrough work ... The book makes clear the importance of comparing, learning from, and adapting legal systems to the ever-changing world, while maintaining the integrity of the Constitution. The subtlety of the book shows deep understanding of these legal regimes, something most legal analysts and policy makers from both systems sorely lack ... a most timely and valuable analysis.”– Prof. Christopher L. Blakesley, University of Nevada, Las Vegas, and author of Terrorism and Anti-Terrorism: A Normative and Practical Assessment

“A careful and authoritative account of the controversial practice of investigative detention as a tool for responding to terrorism in a post-September 11th world. Informed by an impressive knowledge of American, British, and French law, Stigall’s book reflects a distinctive comparative perspective. It deserves to be read not only by scholars and students in the field but also by policy makers on both sides of the Atlantic.” – Prof. Stuart P. Green, Rutgers School of Law-Newark

“Dan Stigall’s analysis highlights the danger of dismissing a comparative approach, for he has most effectively used the British and French experience in discussing detention. While no regime has the answer (an illusion, at best), democratic nations can well learn from each other’s successes and failures. Precisely for that reason, policy makers, jurists, and the concerned public owe Dan a collective thanks; in addressing the extraordinarily complicated issue of detention from a comparative perspective, he has truly bitten off a very large bite of a problematic apple. That he has done so is to our benefit; that he has done so successfully is to his credit. While we shall continue to struggle with the limits of detention and what legal paradigm is the “correct” one, we are the richer for Dan’s book. It can serve as an effective “guide” as we continue to traverse the never-ending field of terrorism and counterterrorism.” – Amos N. Guiora, Professor of Law, S. J. Quinney College of Law, University of Utah

Dan E. Stigall is a U.S. Army Judge Advocate (JAG). He holds an LLM from George Washington University and a JD from the Paul M. Hebert Law Center at Louisiana State University. He has served as a military lawyer in Europe, the Middle East, and throughout the United States. He researches and writes on topics related to international law and comparative law. His articles have appeared in the George Washington International Law Review, the Cardozo Journal of International and Comparative Law, the Military Law Review, and numerous other publications.