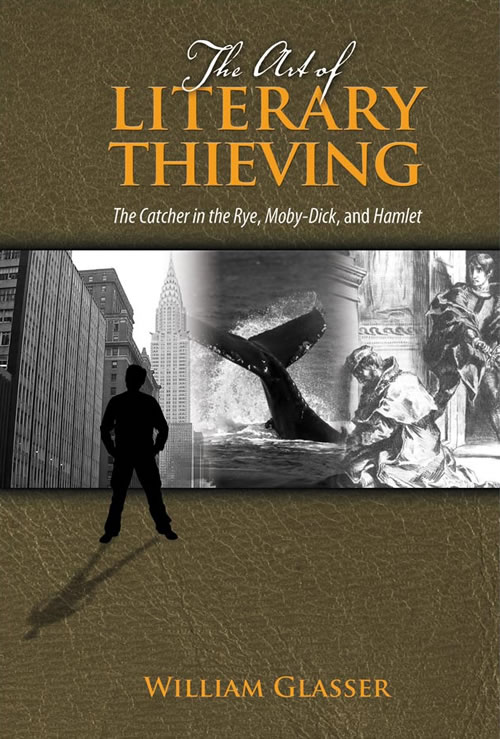 The Art of Literary Thieving: The Catcher in the Rye, Moby-Dick, and Hamlet by William Glasser

The close––yet undiscovered––relationship that exists between these three works offers readers a more revealing light that shines forth from each of them upon the other two, bringing a greater clarity to these always-challenging literary creations. This book offers, in detail, clarifying studies of the writer's craft as pursued by three master craftsmen in the act of achieving their literary masterpieces.

T. S. Eliot once remarked that "mediocre writers borrow, great writers steal." In that light, The Art of Literary Thieving offers readers a more comprehensive experience of the three classic works explored in this book. It does so by revealing the close relationship existing between those three works, both in content and crafting, and by establishing, in detail, how each of their authors brought together carefully selected materials from a variety of literary and biographical sources, out of which they fashioned, in their fictional worlds, their also closely related visions of the forces at work in their actual worlds.

From the moment of their first appearance, in print or on the stage, these works have sown confusion and misconceptions, not only throughout their general readers and viewers, but also among well-established and highly respected critics to this very date. What was Shakespeare attempting to achieve in Hamlet? Why does Hamlet keep delaying to act? Was Hamlet mad, or only acting so? And what about the final, death-filled scene? It has been said that there are as many interpretations of Hamlet as there are viewers and readers. Then turn to the distracting hodge-podge of material in Moby-Dick. Why did Melville drag so much of it into his novel? Was he simply trying to pad the book for publication? And why was there such a glaring lack of any clear narrative? And what did the white whale, after all, mean? Did it stand for some destructive and devilish force at work within this world? Or was it really a visible embodiment of God? The Catcher in the Rye, in its own way, has also brought forth a comparable amount of confusion, with noted critics again badly missing the goal that Salinger had in mind, and the distinctive means he pursued to achieve it. The novel has been condemned as having no plot whatsoever, of completely lacking in any symbolic sense, of failing to reach any meaningful resolution. Indeed, of presenting no ending at all. These three classic works, across too many years now, have each been persistently viewed as offering a more than impressive, but nevertheless perplexing, literary experience.

Why have such unfortunate critical responses to the three classic works, as described above, persisted across so many years? For much too long now, a literary work, once completed, has been viewed as having a separate existence, no longer under the author’s control, and so left open to a variety of responses, regardless of how widely variable, or even contradictory, they might prove to be. However, that misguided approach simply ignores the fact that the three authors, in each case, have maintained a strong controlling presence within their completed works, a pervasive presence that is clearly revealed through the meticulous crafting we can discover throughout each work. The Art of Literary Thieving invites its readers to follow in the clearly marked footsteps of these three classic authors, as each of them crafts his materials into one of the world’s truly exceptional literary experiences.

The close, and as yet undiscovered, relationship that exists between these three works offers readers a more revealing light that shines forth from each of them upon the other two, bringing a greater clarity to these always challenging literary creations. That relationship also helps to highlight the detailed crafting within each work that has been meticulously designed, in each case, to guide the reader to the author’s ultimate goal: a vibrant, imaginative experience, imbued with meaning and emotion, that the author wishes to share with the reader. The three authors, without question, have each succeeded in reaching that goal. And they also remain, within their works, ready to show their readers how to join them.

This is an important book for all literature collections.

“Plenty here for the scholar of literature … unique and fascinating takes.” – Transnational Literature

William Glasser is President Emeritus of Southern Vermont College. He received his PhD in English through the Writer’s Workshop at the University of Iowa, his MA in Creative Writing at the University of Florida, and his BA at Harpur College. Dr. Glasser taught for many years at Williams, Skidmore, Trinity in Hartford, and at the University of Salzburg, Austria, as a Senior Fulbright Lecturer. His publications include articles, short stories, and poetry in The Michigan Quarterly Review, Sewanee Review, The Berkshire Review, and a variety of other scholarly journals in the United States, Austria, and South Korea.

The Catcher in the Rye

Appendix A: “The Town-Ho’s Story”

Appendix B: The Loom of Time