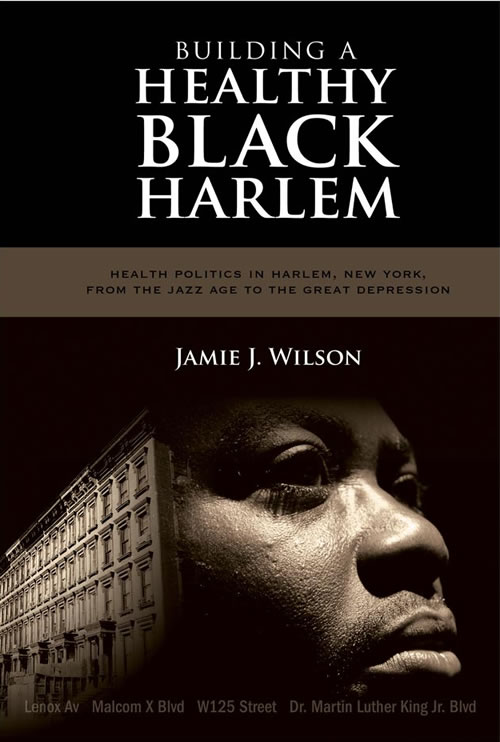 Building a Healthy Black Harlem: Health Politics in Harlem, New York, from the Jazz Age to the Great Depression by Jamie Wilson

"Wilson's book is a valuable contribution to our knowledge of a place and time better known for its famous writers and artists than for the quotidian struggles of its workers facing racism and the structural economic trap of high rents and low wages ... Wilson's book is an impressive achievement that updates social history with fresh material and perspectives and makes important interventions in the literature on African American urbanization." – Afro-Americans in New York: Life and History

Harlem, New York, in the 1920s and 1930s was a community in transition. What had been a predominantly white immigrant community became a largely African American and West Indian one during this relatively short period. While historians of the era and New York City have noted the waxing and waning of black cultural production–– commonly known as the Harlem Renaissance––and leftist black political activity during the Great Depression, the history surrounding the ways in which the inchoate black community mobilized around issues of community maintenance has been largely ignored.

Historians of New York City in general and the African American experience within new York City in particular fail to address black people’s quotidian efforts to make their lives sustainable, improve their physical health, enhance their emotional dispositions, and enrich their neighborhoods during the initial decades of urbanization in Harlem, New York. However, this urban black community’s struggle surrounding community formation and maintenance of health during the 1920s and 1930s in many ways was a test case for how black people negotiated city life nationwide during the first major era of black urban life in the twentieth century. This book offers a way of looking at black life during Harlem’s interwar period that compliments studies of black creative production and black radical and nationalist politics.

Using a sociological, historical, and psychological approach, this work offers a multidisciplinary perspective and fills the research gap about the Harlem community and urban black life during the Jazz Age and the Great Depression. This book proposes that Harlem was an intricate domain of competing ideologies, needs, and interests wherein there were many cross-cutting forms of power and exclusion. Such competition placed the community at the intersection of complicated power relations in which local, citywide and nationwide power, policies, and commitments overlapped. Changing economic circumstances that characterized the interwar period combined with the shifting municipal politics including community reliance on government support and the political strength of medical societies that left Harlem residents politically and economically circumscribed in their efforts to build and fortify institutions focused on maintaining community wellness.

In this larger circumscription, citywide, statewide, and nationwide politics made health for black people a politicized affair during the early twentieth century. This work further reveals that in conjunction with the political economy of race, health was a major issue of debate that residents of Harlem could enter into despite systematic efforts by politicians and medical professionals to simultaneously limit residents’ political agency and regulate health services and institutions in New York City. Such fissures and cracks within the political structure allowed for community engagement and empowerment.

This study provides for a more comprehensive understanding of the connections among black morbidity, mortality, health-care delivery, and black political engagement in Harlem, New York, and aims to expand the historical understanding of race and politics, as well as the lived experiences of black people in New York City in the early twentieth century.

"Wilson's book is a valuable contribution to our knowledge of a place and time better known for its famous writers and artists than for the quotidian struggles of its workers facing racism and the structural economic trap of high rents and low wages ... Wilson's book is an impressive achievement that updates social history with fresh material and perspectives and makes important interventions in the literature on African American urbanization." – Afro-Americans in New York: Life and History

Jamie Wilson is an assistant professor of history at Salem State College in Salem, Massachusetts. He holds a PhD and an MA from New York University, and a BA from the University of Delaware. He has also published articles in the International Social Science Review, Afro-Americans in New York Life and History, and the Negro History Bulletin.


Chapter 1: Health Conditions in Harlem in the Early Years of Black Urbanization

Chapter 2: “We will have to trouble you to come along for practicing medicine without a physician’s license”: The Criminalization of Magico-Religious Workers

Chapter 4: “Child, I don’t think this is a birth mark”: Community Agency and Responses to Health Conditions

Chapter 5: A New Deal for Health and Well-Being?