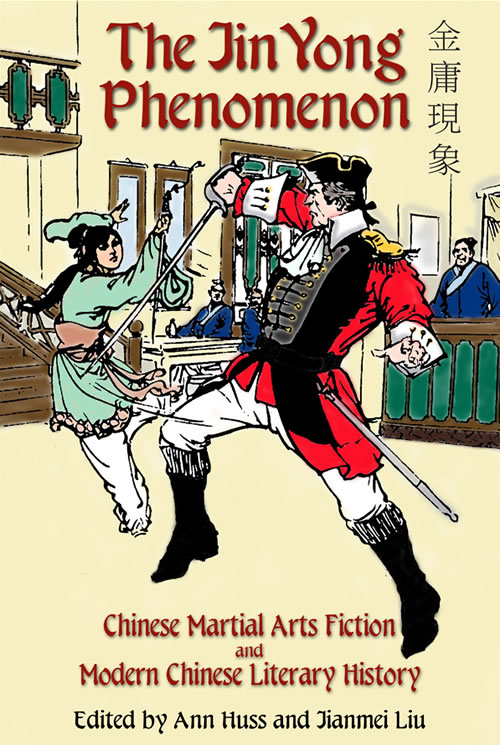 “A successful study of Jin Yong’s literature with valuable and insightful opinions … a pleasure to read.” – CLEAR

This pioneering book is the first English-language collection of academic articles on Jin Yong's works. It introduces an important dissenting voice in Chinese literature to the English-speaking audience.

Jin Yong is hailed as the most influential martial arts novelist in twentieth-century Chinese literary history. His novels are regarded by readers and critics as “the common language of Chinese around the world” because of their international circulation and various adaptations (film, television serials, comic books, video games).

Not only has the public affirmed the popularity and literary value of his novels, but the academic world has finally begun to notice his achievement as well. The significance of this book lies in its interpretation of Jin Yong’s novels through the larger lens of twentieth-century Chinese literature. It considers the important theoretical issues arising from such terms as modernity, gender, nationalism, East / West conflict, and high literature versus low culture.

The contributors of the articles are all eminent scholars, including famous exiled scholar, philosopher, and writer Liu Zaifu.

“A successful study of Jin Yong’s literature with valuable and insightful opinions … a pleasure to read.” – CLEAR

"The authors in this volume examine the martial arts tradition from many vantage points, and are able to situate the tree within the forest of culture, history, and politics. These collected essays make a great contribution to a historically nuanced image of China. These days, many students and readers are introduced to Chinese culture, not by studying the Chinese language or classics, but by way of the martial arts. The martial arts may or may not serve as an appetizer leading to the main course. This volume will shepherd intrigued guests directly to the main course and into the temple of Chinese history and culture." - Ban Wang, Rutgers University

Ann Huss is Assistant Director of the Centre for East Asian Studies at the Chinese University of Hong Kong. Prior to this appointment, she taught Chinese literature and language at Wellesley College and Colgate University. Dr. Huss earned her PhD. from Columbia University and her BA from Wellesley College. In 2005, she was awarded a two-year Public Intellectuals Fellowship by the National Committee on United States-China Relations. Dr. Huss also received a 2006 PEN Translation Grant for her translation into English of Ge Fei’s Renmian taohua.

Jianmei Liu is Associate Professor of Chinese Language and Literature at the University of Maryland, College Park. She received her PhD from Columbia University, her MA from the University of Colorado at Boulder, and her BA from Beijing University in China. In addition to several articles, Dr. Liu has also published the following books: The Goddess in the Carnival (Hong Kong: Mingbao, 2004; Taibei: Jiuge, 2005; Beijing: Sanlian, 2007) and Revolution Plus Love: Literary History, Women’s Bodies, and Thematic Repetition in Twentieth-Century Chinese Fiction (Honolulu: University of Hawai’i Press, 2003). Her book, Understanding Life, co-authored with Liu Zaifu, was named one of the thirty best books at the 2001 Hong Kong International Book Exhibition and received one of the “Ten Best Books of 2002” award in Hong Kong.


Liu Zaifu is the former director of the Literary Institute of the Chinese Academy of Social Sciences. He has published 35 books. Some of his publications include A Biography of Lu Xun, Lu Xun and Natural Science, Lu Xun’s Aesthetics, The Theory of Character Organization, Farewell Gods, Twenty-Five Kinds of Men, and a five-volume series entitled Records of Exile. He is the co-author of Tradition and Chinese, Farewell Revolution, and Understanding Life Together. He is currently a Fellow at University of Colorado at Boulder and Honorary Professor at City University of Hong Kong.


Li Tuo is a former editor of “Beijing Literature” (Beijing wenxue). He is a novelist and literary critic and is currently working on a book-length project on Maoist Discourse.


Li Yijian is an editor of “Literary Review”, a publication of the Chinese Academy of Social Sciences, and co-author of Reading Deconstruction.

John Christopher Hamm is Associate Professor of Chinese Literature in the Department of Asian Languages and Literature at the University of Washington, Seattle, and author of Paper Swordsmen: Jin Yong and the Modern Chinese Martial Art Novel (University of Hawaii Press, 2005).

Xiaofei Tian received her Ph.D in Comparative Literature from Harvard University. She is Professor of Chinese Literature in the Department of East Asian Languages and Civilizations at Harvard University. She is the author of Tao Yuanming and Manuscript Culture: The Record of A Dusty Table (Seattle: University of Washington Press, 2005). Her new book Beacon Fire and Shooting Star: The Literary Culture of the Liang (502-557) is forthcoming from Harvard University Asian Center Press. She is also the author and translator of a number of books in Chinese, including one on a sixteenth century novel Golden Lotus, an annotated translation of Sappho's poetry, and a book on the literature and culture of the Moorish Spain.

Carlos Rojas is Assistant Professor at University of Florida. He received his Ph.D. of Chinese literature from Columbia University. He has published articles on Taiwanese modernist fiction, Hong Kong martial arts fiction, the late imperial "literati novel," and contemporary Chinese-language film. He is the co-editor (with David Wang) of a volume of Taiwan literature (forthcoming from Duke University Press), and is completing a manuscript on visual culture and tropes of visuality in modern Chinese literature and culture.

Gang Gary Xu is Associate Professor of Chinese Literature and Cinema at the University of Illinois, Urbana-Champaign. He is the author of Sinascape: Contemporary Chinese Cinema (Roman & Littlefield, 2006) and editor of The Cross-Cultural Zizek Reader (Beijing University Press, 2006). He has also published numerous articles on Chinese fiction, cinema, and politics of globalization.

Wang Ban (PhD, UCLA) is Professor in Chinese and Comparative Literature at Rutgers University. His publications include The Sublime Figure of History (Stanford UP, 1997), Illuminations from the Past:Trauma, Memory and History (Stanford, 2004) and Lishi yu jiyi (History and Memory) (Oxford UP, 2004).

The Tree within the Forest: The Wonderful Culture of Rivers and Lakes

Chapter Two: The Language of Jin Yong’s Writing: A New Direction in the Development of Modern Chinese

Chapter Three: Transcending “High” and “Low” Distinctions in Literature: The Success of Jin Yong and the Future of Martial Arts Novels

Chapter Five: The Labyrinth of Identity: Jin Yong’s Song of the Swordsman

Chapter Nine: Translating Jin Yong: The Context, the Translator, and the Texts

Chapter Ten: The Ship in a Bottle: The Construction of an Imaginary China in Jin Yong’s Fiction