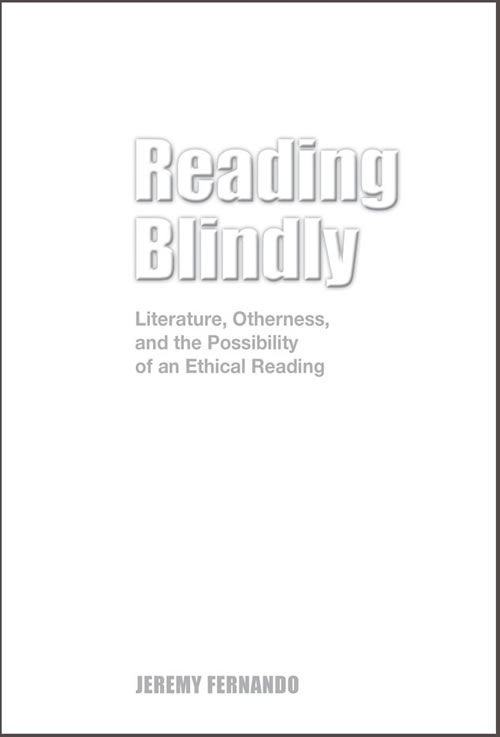 Reading Blindly: Literature, Otherness, and the Possibility of an Ethical Reading by Jeremy Fernando

This book attempts to conceive of the possibility of an ethics of reading––“reading” being understood as the relation to an other that occurs prior to any semantic or formal identification, and therefore prior to any attempt at assimilating what is being read to the one who reads.

Reading Blindly attempts to conceive of the possibility of an ethics of reading––“reading” being understood as the relation to an other that occurs prior to any semantic or formal identification, and therefore prior to any attempt at assimilating what is being read to the one who reads. Hence, “reading” can no longer be understood in the classical tradition of hermeneutics as a deciphering according to an established set of rules as this would only give a minimum of correspondence, or relation, between the reader, and what is read. In fact, “reading” can no longer be understood as an act, since an act by necessity would impose the rules of the reader upon the structure of what (s)he encounters; in other words the reader would impose herself upon the text. Since it is neither an act nor a rule-governed operation, “reading” needs to be thought as an event of an encounter with an other––and more precisely an other which is not the other as identified by the reader, but heterogeneous in relation to any identifying determination. Being an encounter with an undeterminable other––an other who is other than other––“reading” is hence an unconditional relation, a relation therefore to no fixed object of relation. Hence, “reading” can be claimed to be the ethical relation par excellence.

Since “reading” is a pre-relational relationality, what the reader encounters, however, may only be encountered before any phenomenon: “reading” is hence a non-phenomenal event or even the event of the undoing of all phenomenality. This is a radical reconstitution of reading positing blindness as that which both allows reading to take place and is also its limit. As there is always an aspect of choice in reading––one has to choose to remain open to the possibility of the other–– Reading Blindly, by extension, is also a rethinking of ethics; constantly keeping in mind the impossibility of articulating an ethics which is not prescriptive.

Ostensibly, Reading Blindly works at the intersections of literature and philosophy; and will interest readers who are concerned with either discipline. However as reading is re-constituted as a pre-relational relationality, it is also a re-thinking of communication itself––a rethinking of the space between; the medium in which all communication occurs––and by extension, the very possibility of communicating with each other, with another. As such, this work is, in the final gesture, a meditation on the finitude and exteriority in literature, philosophy––calling into question the very possibility of correspondence, and relationality––and hence knowledge itself.

For all that can be posited is that reading first and foremost is an acknowledgement that the text is ultimately unknowable; where reading is positing, and which exposes itself to nothing––and is in fidelity to nothing––but the possibility of reading.

"In confronting head on the difficulties of any attempts, including his own, to reconcile individuality and ethical responsibility, Jeremy Fernando’s book provokes such crucial questions as well as setting out his position in alluring detail. The book belies its title, as it was meant to; that is a measure of its success." - Transnational Literature

“This work is responsible for initiating a new generation of reflections that make our philosophical certitudes tremble. Grappling with the implications of non-phenomenal reading, Jeremy Fernando scans the works of outstanding thinkers whose insight weighs heavily on our relation to language and world. Fernando locates the constitutive blindness that stalls the ethical imperative while giving it new meaning.” — Avital Ronell,Professor of German, English, French, and Comparative Literature, New York University;and author of The Telephone Book, Stupidity, Crack Wars, and The Test Drive

“There are no encounters in theory, it is said––for theory, whatever its claims, cannot open to the event. As Jeremy Fernando demonstrates masterfully in Reading Blindly, theory must become reading to give the encounter to thought. Here, in a rich and always-challenging meditation, reading is understood from an ethical turn that prompts us to rethink ethics itself.” — Christopher Fynsk, Director of the Centre for Modern Thought, The University of Aberdeen;and author of Infant Figures, Language and Relation, and The Claim of Language

Jeremy Fernando is the Jean Baudrillard Fellow at the European Graduate School, where he received his PhD. He works in the intersections of literature, philosophy, and the media, and is the author of Reflections of (T)error, and The Suicide Bomber; and Her Gift of Death. Exploring his thinking through different media has led him to both film and art; and his works have been exhibited in Seoul, Hong Kong, Vienna, and Singapore. He is the editor of the thematic magazine One Imperative, and also a Research Fellow at the School of Humanities and Social Sciences, Nanyang Technological University.

On Reading: a Pact with the Devil

Blindness Or What Is This No-Thing We See?

The Book As A (Death) Sentence

Blind Ethics or Close Your Eyes (To) See the Third

Literary Theory and the Erasure of Texts

The Contract: Venus in Furs or How to Read the Other

“What Is To Be Done?” Or How To Read While Maintaining Radical Otherness

Forever Undecided Or ‘Who Is The Who That Is Reading?’

Reading and Testing: Reading as Testing

Putting J Back Before The Law

Reading (Writing): How, What, and a Secret

Do This In Memory of Me

Only Fiction is Stranger than Fiction