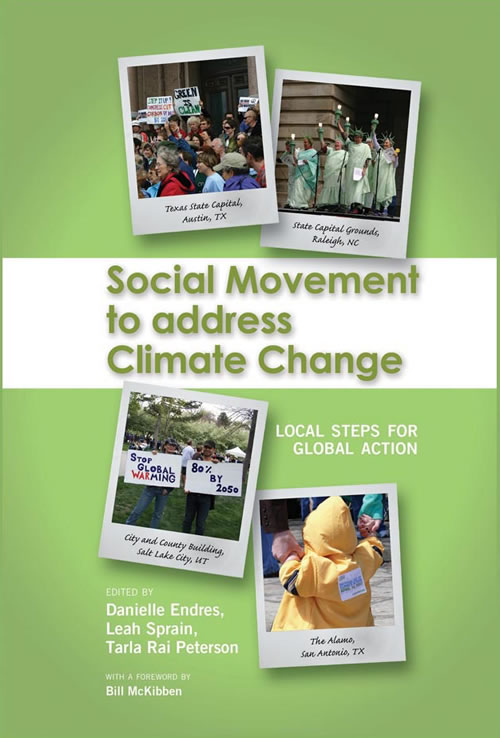 “This volume advances inquiry in areas of social movement study, environmental discourse, and applied approaches to public address. The unique preparation and collective gathering of data serves as a model for scholars considering broad forms of research collaboration ... At minimum, this book should be essential reading for any student of contemporary social movements.” – Rhetoric and Public Affairs

Climate change is one of the most significant environmental issues of our time. As is the case for the environmental movement in general, social activism is a crucial venue in which to advocate for policies to slow global warming and mitigate the effects of climate change. Recently, several campaigns have emerged within a global effort to create a climate change social movement. Step It Up is one such campaign.

Long-time activist Bill McKibben and a group of Middlebury College students organized the Step It Up (SIU) National Day of Climate Action (April 14, 2007) as a way to “do something” other than change light bulbs, to be part of “the first nationwide do-it-yourself mass protest.” Over 1000 individuals and local groups hosted local SIU actions that shared a common message: “Step it up, Congress! Enact immediate cuts in carbon emissions, and pledge an 80% reduction by 2050.” The result was a loosely organized, open-source, and multi-faceted campaign of local actions in a movement for climate change.

The Step It Up campaign serves as an excellent case study in movement building in the 21st century. With a mix of traditional organizing tactics and savvy use of new media technologies, the SIU campaign attempted to train new activists, support local leaders, invite creativity, and coordinate the campaign primarily through the Internet. This campaign stands as an example of how social movements must emerge out of and interact with the contemporary political and economic pastiche. The analysis in this book yields answers to the question of what it takes to build a movement in the 21st century not only in the specific context of climate change and environmentalism but also more generally for other social movements and campaigns of any topic.

This edited volume is the culmination of a national research project on the Step It Up campaign that examines the strategic aspects of constructing social movements and campaigns. Chapter authors attended seventeen local SIU actions in eight states. Using participant observation, interviewing, and rhetorical analysis, the chapters in this volume contribute to our understanding of rhetorical framing, modes of organizing, and practices of citizenship for contemporary social movements. This unique approach to studying a campaign as it happened yields important insights for both scholars and social movement practitioners.

The chapters in this book suggest the strategic potential and of a loosely coordinated network of agents, opportunities, and practices at multiple, local sites of decision to engage in critically important ways with the larger political sphere. In addition to the heuristic value of our analyses, the chapters comment on the basic incompleteness or what-is-not-yet-done quality of the SIU campaign. The book reveals what local, grassroots, web-based initiatives like SIU are capable of accomplishing and how this potential was limited in the particular case of Step It Up. Second, the chapters in this book highlight the challenge of assessing ‘effect’ in social movements. As our analyses show, it is difficult to determine cause and effect relationships as well as measures of ‘success’ within contexts of large scale and complexity. Rather than attempt to make one argument about the effect of the SIU campaign, we instead focus on the strategic potential of the campaign. Finally, this volume discloses a variety of specific strategies for local movements and campaigns to have influence in a larger national or international political sphere.

Social Movement to Address Climate Change is an important book for all social movement, environmental communication, and climate change collections.

“This volume advances inquiry in areas of social movement study, environmental discourse, and applied approaches to public address. The unique preparation and collective gathering of data serves as a model for scholars considering broad forms of research collaboration. Rhetoric and public address scholarship has largely been a solitary affair, but this book demonstrates how research can be both independent and collaborative. The book is perhaps most promising as a pedagogical text. The editorial consideration of interdisciplinary and public audiences is evident in consistently clear writing, with theoretical frameworks straightforward enough for advanced undergraduate reading yet engaged enough for use in graduate seminars. The variety of approaches and practical conclusions can offer innumerable points of discussion for general courses in theory and criticism as well as specific topics such as modern movements, environmental discourse, and public dissent. At minimum, this book should be essential reading for any student of contemporary social movements.” – Rhetoric and Public Affairs

"Climate change deniers have benefited from political strategies developed by conservative think tanks and public relations experts paid handsomely by the energy industry. With this book, environmental activists can benefit from some scholarly attention turned to their efforts. This book exhibits the best that public scholarship has to offer. Its authors utilize sophisticated rhetorical theory and criticism to uncover the inventional constraints and possibilities for participants at various sites of the Step-It-Up day of climate activism. What makes this book especially valuable is that it is not only directed to fellow communication scholars, but is written in a clear and accessible style to bring the insights of an academic field to a broader public of activists committed to building an environmental social movement." — Prof. Leah Ceccarelli, University of Washington

“This is an unusually interesting volume grounded in a sustained and coordinated analysis of the Step It Up campaign. Generating a multifaceted and shared archive for analyzing the SIU campaign on global warming, the volume’s multiple authors critically examine intersecting dimensions of the SIU campaign—its persuasive strategies, organizational dynamics, and political practices for everyday citizens—with an eye on implications for enhancing the larger environmental movement. Readers with a practical and theoretical interest in social and political movements will find this book engaging and leavened with heuristic value.” — Professor Robert L. Ivie, Indiana University, Bloomington

Tarla Rai Peterson holds the Boone & Crocket Chair of Wildlife and Conservation Policy at Texas A&M University. She is also a professor of Environmental Communication at the Swedish University of Agricultural Sciences and an adjunct professor of Communication at the University of Utah. She is associate editor of Environmental Communication: A Journal of Nature and Culture and is on the editorial board for the Quarterly Journal of Speech. Her areas of expertise include sustainability and public participation in collaborative management of natural resources. She seeks to (1) enhance citizens’ abilities to understand science and technology; (2) provide them with a working knowledge of relevant political structures, rules, and laws; (3) strengthen their communication competence; and (4) encourage them to participate in the development and implementation of environmental policy. She also works independently with natural resource managers and regulators, inviting them to engage in joint learning processes by contributing technical guidance to ensure that members of the public are always aware of relevant rules and laws that will impact policy recommendations. Her publications include Green Talk in the White House: The Rhetorical Presidency Encounters Ecology, Sharing the Earth: The Rhetoric of Sustainable Development, and numerous articles. Tarla received an interdisciplinary PhD (emphasis in environmental rhetoric) and her MA from Washington State University, and a BA in American history from the University of Idaho.


Chapter 9: Step It Up and Image Politics in the Pacific Northwest (Leah Sprain, Todd Norton, and Tema Milstein)


Chapter 12: An Ecologist’s Response to the SIU Campaign: The Role of Natural Scientists in Environmental Movements (Markus J. Peterson)


Chapter 13: SIU and Beyond: Challenges of Scale and the Strategic (Robert Cox)