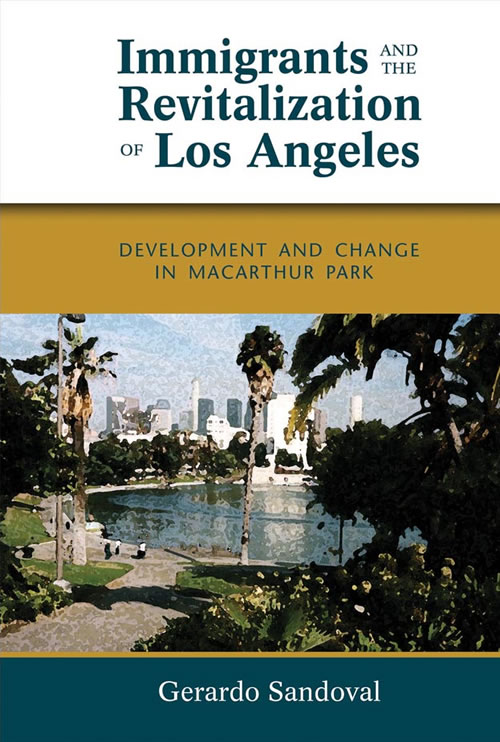 Immigrants and the Revitalization of Los Angeles: Development and Change in MacArthur Park by Gerardo Sandoval

"An engaging book which never shies away from the difficulties of urban regeneration. Sandoval has created finegrained, nuanced insights into the challenging but ultimately successful journey that formerly troubled communities can take towards positive change." - Urban Studies

MacArthur Park, a low-income immigrant community in Los Angeles; although plagued by crime and violence well into the 1990s, it was able to turn a large-scale redevelopment plan to its advantage. This book describes and analyzes how that unusual result came about. Other attempts to “improve” marginal areas have generally led to the displacement of the areas´ low-income residents, and part of the resulting hostility has been directed at city planners. City-planning professionals have long been deeply involved in efforts to redevelop low-income neighborhoods, including urban renewal and the resulting destruction of many low-income communities in the 1950s. The profession’s difficult relationships with communities have become a key theme within urban planning. The self-revitalization of MacArthur Park’s Mesoamerican immigrant community and the community’s internal organizations and relationships with supporters, planners, and politicians at all levels, make a fascinating and revealing case study. MacArthur Park’s case, although perhaps an anomaly in its positive outcomes for the local community, highlights the opportunities and approaches that offer hope of positive outcomes in other communities. The processes of co-adaptation and co-evolution observed in MacArthur Park can be helpful in understanding redevelopment and supporting revitalization elsewhere, arguably across a wide range of communities and redevelopment efforts.

Building upon on-site observations and review of key documents, records, and literature, this case study relied on interviews with a broad cross-section of stakeholders in seeking to understand and explain the mechanisms the immigrant community used to make redevelopment work for its members. Stakeholders interviewed included representatives of community-based organizations, local businesses, residents, informal workers, city politicians, city planning staff members, and police.

The study’s findings reveal that various forms of capital (social, political, financial, and cultural) present in immigrant neighborhoods may not only increase the neighborhoods’ attractiveness as targets for redevelopment but also help them sustain their immigrants’ milieu in spite of such challenges.

Redevelopment in low-income communities––if it is to benefit those communities––requires attention to cultural continuity and to particular possibilities for adaptation. Planners and urban scholars, in their training, practice, and research, working with communities, need to be able to identify, assess, safeguard, develop, and build upon the strengths and resources of multicultural neighborhoods. This book will be a valuable resource for them.

"An engaging book which never shies away from the difficulties of urban regeneration. Sandoval has created finegrained, nuanced insights into the challenging but ultimately successful journey that formerly troubled communities can take towards positive change." - Urban Studies

“This book offers a new way of understanding how neighborhood revitalization can be done in a way that benefits both residents and the economy. Sandoval pioneers the use of complexity thinking as a lens to see what would otherwise be invisible—the co-evolution of a community with the city’s actions and policies. He does this through a vivid case study of the process by which remarkable positive change took place in a once troubled, poor neighborhood in Central Los Angeles.” – Judith Innes, Professor of City and Regional Planning, UC Berkeley, and author of Planning with Complexity: Introduction to Collaborative Rationality for Public Policy

“Sandoval illuminates the variations in the way city hall people and neighborhood people deal with one another. Much as they may want to support neighborhood organizations, his study reveals that city hall people are often unclear on how to do it. We need a theory of city hall-neighborhood interaction; maybe we have now found it in Los Angeles.” – Pierre Clavel,Professor of City and Regional Planning, Cornell University

Gerardo Sandoval is assistant professor of community and regional planning at Iowa State University. His PhD and MCP in city and regional planning are from the University of California, Berkeley. Dr. Sandoval’s research, in California, Iowa, Latin America, and Japan, has focused on community impacts of urban infrastructure projects, how immigrants revitalize urban and rural communities, immigrants’ support networks, and co-adaptation of immigrant and host communities. He currently teaches Comprehensive Planning, Urban Revitalization, and Planning Theory and Methods.

Chapter 2: Looking Beyond the Blighted Surface: The Gaze of Redevelopment and the Immigrants’ Milieu

Chapter 6: From Warrior Cops Toward Community Policing: Co-evolutionary Processes and an Analysis of the Mechanisms by Which They Took Place