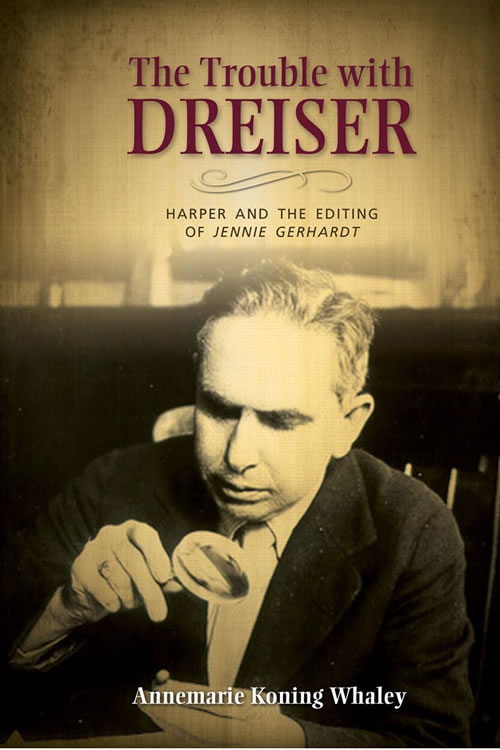 The Trouble with Dreiser: Harper and the Editing of Jennie Gerhardt by Annemarie Koning Whaley

This book is the first extensive study of the damaging effects of the editorial process on a significant work of American literature. This study carefully compares the restored edition to the 1911 edition, revealing clear and precise patterns to the Harper editing. It is an important work for collections of American literature, Theodore Dreiser, textual studies, early twentieth-century cultural studies (especially those interested in ethnicity), and early twentieth-century historical studies.

In the past twenty years, there has been a significant effort to publish restored editions of American literary works. Scholars argue that previous editions of these works were so heavy edited or censored that their artistic integrity was compromised and, in some cases, even lost. Theodore Dreiser’s Jennie Gerhardt is one such work. When Jennie Gerhardt was published by Harper and Brothers in 1911, sales were barely mediocre and within a year the novel disappeared from sight. Even after Dreiser’s reputation as one of America’s most significant writers of realistic and naturalistic fiction became well established, Jennie Gerhardt continued to go largely unnoticed by the literary community. What scholars have recently discovered, however, is that some 16,000 words were cut or emended by the Harper editors prior to publication. In 1992 the University of Pennsylvania Press published a restored, critical edition, commonly called the “Pennsylvania edition.” This edition restores most of the cuts and emendations made to Dreiser’s original manuscript, rendering it, some argue, a better novel because it is closer to what Dreiser “intended” to have published. The problem, however, is that not everyone agrees with this assessment, thus leaving the literary community with, essentially, two versions of the same novel.

Simply because the Pennsylvania edition restores the author’s original language does not automatically give it legitimacy or authority over the edited 1911 edition. Issues of editing and publication are tricky and often involve some negotiation between author and editor. Therefore, the only way to establish whether or not Dreiser’s original manuscript is superior to the 1911 edition is to examine the effect of the cuts and emendations on the novel as a work of art. The only way to establish effect is to determine the extent of the editorial changes, the nature of the changes, reasons for the changes, and, if possible, whether or not the author agreed to the changes. Once these issues are settled, the literary community will be able to establish an authoritative edition and better understand how the author and editor operated within the publishing process at this time in history.

This book establishes the restored version of Jennie Gerhardt as a far better piece of literature than the 1911 edition. It is also the first extensive study of the damaging effects of the editorial process on a significant work of American literature. This study carefully compares the restored edition to the 1911 edition, revealing clear and precise patterns to the Harper editing. These patterns, in turn, suggest that the Harper editors deliberately approached Dreiser’s original manuscript with the intention of softening its social and moral content. This study argues that the firm’s historical emphasis on family values and its lengthy bout with bankruptcy and reorganization, coupled with the conservative social and moral climate at the turn of the century, motivated the house to edit the novel with a heavy and censorious hand. The end result was a more agreeable and, therefore, more saleable book. This study also provides an extensive discussion on the probable reasons why Dreiser acquiesced to changes he felt were not in the best interest of his novel.

By continually placing material from the 1911 edition alongside that of the restored edition and then situating the cuts and emendations within their appropriate thematic, historical, cultural, social, moral, biographical, and autobiographical contexts, readers will see how the editors distorted Dreiser’s original writing of every major character, their interaction with their environment, and their relationship with others. Readers will also see how the editing blunted, and in some cases completely erased, Dreiser’s criticism of the wealthy capitalist; society’s understanding and treatment of the poor, the working class, and the immigrant; and traditional notions of motherhood, womanhood, relationships, and the American Dream. This study argues that once Dreiser’s original language is restored, Jennie Gerhardt can stand alongside Dreiser’s other novels and can add to critical discussions on class, gender, morality, ethnicity, naturalism, and romanticism in Dreiser’s fiction.

"An important book ... a fine piece of literary historical detective work and the author should be applauded for examining the controversy." - Studies in American Naturalism

Annemarie Koning Whaley is professor of English at East Texas Baptist University and received her PhD from Louisiana State University. Dr. Whaley has made numerous conference presentations in American, British, and Holocaust studies, and has published articles in Dreiser Studies, Conference of College Teachers of English Studies, Theodore Dreiser and American Culture: New Readings, the Theodore Dreiser Encyclopedia, and Identity and Issues in Literature.


Introduction: Dreiser and the Restoration of Jennie Gerhardt

Chapter 1: Motivation: Why Dreiser Accepted the Changes and Why Harper Made Them

Chapter 8: Editing Jennie into the Background: Jennie and Lester Kane

Chapter 9: Editing the Conclusion: The Problem of the Coda