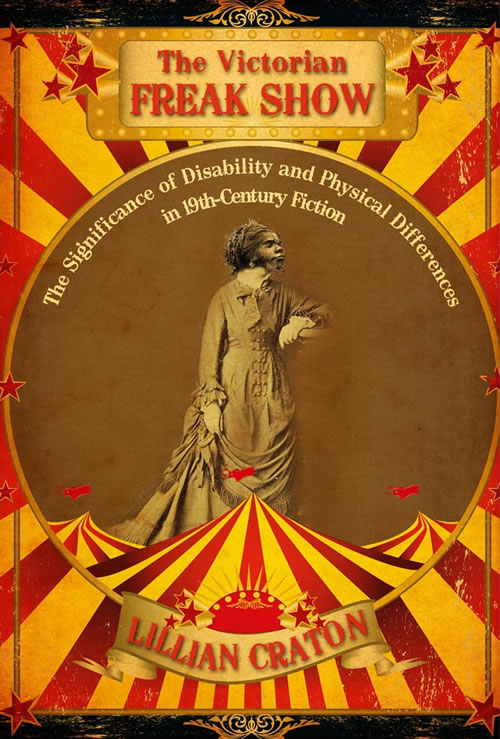 The Victorian Freak Show: The Significance of Disability and Physical Differences in 19th-Century Fiction by Lillian Craton

"An important contribution ...the most significant innovation of the project is the way in which Craton uncovers the often positively valence of such differences as they are depicted in literary texts ... scholars in disability studies and Victorian studies will find this book useful and compelling, … yet it is readable for undergraduates as well." – Victorian Studies

The Victorian freak show was at once mainstream and subversive. Spectacles of strange, exotic, and titillating bodies drew large middle-class audiences in England throughout much of the nineteenth century, and souvenir portraits of performing freaks even found their way into Victorian family albums. At the same time, the imagery and practices of the freak show shocked Victorian sensibilities and sparked controversy about both the boundaries of physical normalcy and morality in entertainment. Marketing tactics for the freak show often made use of common ideological assumptions—compulsory female domesticity and British imperial authority, for instance—but reflected these ideas with the surreal distortion of a fun-house mirror. Not surprisingly, the popular fiction written for middle-class Victorian readers also calls upon imagery of extreme physical difference, and the odd-bodied characters that people nineteenth-century fiction raise meaningful questions about the relationships between physical difference and the social expectations that shaped Victorian life.

The academic discipline of disability studies has emerged in the last few decades to encourage aesthetic, philosophical, and political discussions of the significance of disability and physical difference. This field ultimately seeks to expand the rights and social roles offered to those whose bodies defy the norm, but it also explores the subtle ways in which art, literature, spectacle, and other cultural traditions encode physical difference with ideological meaning. Just as feminism, queer theory, and other areas of cultural study have addressed both specific representations of the body and the larger systems of social power that shape how we see and interpret physicality, so too does disability studies seek both the reexamination of cultural works in light of physical difference and the illumination of ways in which physical bodies unlock or foreclose access to power.

This book applies the practices of disability studies to the context of Victorian popular fiction. It offers new ways of reading the works of some of the nineteenth century’s most beloved writers through their approach to physical difference. It also seeks to renew critical interest in popular novels that, while rarely taught in the academic world, still paint complex, intriguing portraits of Victorian ideology and experience.

This book is primarily an aesthetic analysis of freak show imagery as it appears in Victorian popular fiction, including the works of Charles Dickens, Wilkie Collins, Guy de Maupassant, Florence Marryat, and Lewis Carroll. It argues that, in spite of a strong nineteenth-century impulse to define and defend normalcy, images of radical physical difference are often framed in surprisingly positive ways in Victorian fiction. The dwarves, fat people, and bearded ladies who intrude on the more conventional imagery of Victorian novels serve to shift the meaning of those works’ main plots and characters, sometimes sharpening satires of the nineteenth-century treatment of the poor or disabled, sometimes offering new traits and behaviors as supplements for restrictive social norms. In particular, this book points out unexpected connections between the cultural iconography of the freak show and fiction’s response to middle-class ideals for women and girls. It argues that images of positively-encoded difference—such as the exaggerated nurturance of Dickens’s fat women and the traditionally-male strengths of Collins and Marryat’s bearded ladies—nudge Victorian ideology towards more inclusive and flexible gender norms.

The Victorian Freak Show will interest scholars of nineteenth-century fiction, as well as readers concerned with disability rights or the relationship between ideology and the body.

"An important contribution to the growing study of physical differences in the nineteenth century ...the most significant innovation of the project is the way in which Craton uncovers the often positively valence of such differences as they are depicted in literary texts ... scholars in disability studies and Victorian studies will find this book useful and compelling, particularly in its discussions of fat and body size, yet it is readable for undergraduates as well." – Victorian Studies

Lillian Craton is an assistant professor of English at Lander University. She holds a PhD and MA from Emory University and a BA from the University of North Carolina at Chapel Hill. She helped to create the Transatlantic Women’s Genre Fiction digital text library at Emory University’s Lewis Beck Center and has published and presented essays on nineteenth-century women’s popular writing, Victorian body image, and teaching with digital texts.

Chapter 1: Littleness in the Novels of Charles Dickens

Chapter 2: The Widest Lap: Fatness and Nurturance in Nineteenth-Century Fiction

Chapter 4: The Mutable Body and the Looking-Glass

Conclusion: Reflecting on the Odd Body