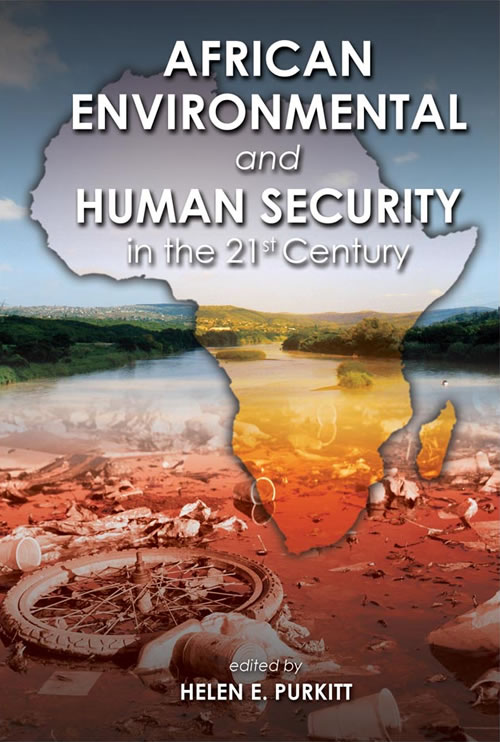 African Environmental and Human Security in the 21st Century by Helen E. Purkitt

"This is the first book to address a broad array of African environmental and human security issues ... The case studies expose the reader to past relevant research, while also identifying the main causes and consequences of different types of political conflicts fueled by human and environmental security problems. Each study also contains policy lessons, "best practices", or recommended future actions. The originality and comprehensiveness of each chapter means that the volume is likely to appeal to a wide range of readers for many years ... an important book for African Studies, economic development, environmental and earth science, environmental security, ecotourism, history, human security, international relations, national security and military science Collections." - Institute for Environmental Security

Environmental and human security issues are vital national security interests in African states because most citizens are engaged in daily struggles to survive. Chronic and worsening resource scarcities and degradations fuel these individual struggles, along with political conflicts among different groups vying to control and benefit from scarce resources. Thus, many observers agree on the importance of expanding the concept of national security in African states, but there is no consensus yet on the optimal approach for studying or improving environmental and human security problems.

While there are books on human and environmental security, few past works focus on Africa or address the interests and concerns of researchers and practitioners working in such diverse fields as development, security, or environmental science. Even though the military is one of the most influential institutions in African countries, no published work to date has addressed issues related to when, how, or if national and foreign militaries should be involved in promoting human and environmental security.

African Environmental and Human Security in the 21st Century fills this void by combining ten original studies that discuss important non-traditional security issues facing countries located in each region of Africa. This volume reflects a shared assumption that one must have case-specific knowledge, use multidisciplinary and multi-level conceptual frameworks, and have an appreciation of feasible and desirable public policies in order to understand and effectively address complex non-traditional security concerns.

The book’s organization reflects this shared commitment of the importance of case specific knowledge, interdisciplinary theory, and informed policy actions. Part One comprises three essays based on conference papers presented at the 49th International Studies Association meeting in March 2008, along with two additional case studies. Each chapter focuses on a particular type of human or security issue area to understand: worsening security conditions in Niger and Chad (Chapter 1), droughts, and other humanitarian emergencies in the Horn and East Africa (Chapter 2,), drivers of low-level in the Casamance region of Senegal (Chapter 3), and water pollution and xenophobic violence in South Africa (Chapter 4).

Part Three delivers insightful recommendations, remediation and conclusions. Chapter 8 provides a series of mini-case studies that illustrates the linkages among greed, grievances and natural resource conflicts in Africa. Chapter 9 surveys how peacekeeping operations address environmental problems but too often aggravate or even causes additional environmental and human security issues. Chapter 10 describes the Kavango-Zambezi (Kaza) Transfrontier Conservation Area, a five-nation proposal to tie the national parks and wildlife conservancies of southern Africa into a common conservation area. The final chapter ties the ten studies together and offers concluding thoughts about the future role of US military forces in Africa non-traditional security areas.

This is the first book to address a broad array of African environmental and human security issues. The book is intended to be used by beginning students, seasoned researchers, novice and experienced practitioners. The case studies expose the reader to past relevant research, while also identifying the main causes and consequences of different types of political conflicts fueled by human and environmental security problems. Each study also contains policy lessons, “best practices”, or recommended future actions. The originality and comprehensiveness of each chapter means that the volume is likely to appeal to a wide range of readers for many years.

Despite the diversity of the contributors’ backgrounds, many of the conclusions and recommendations use common themes about the complex causes of human and environmental conflicts; the need to adopt longer-term time frames to evaluate the effectiveness of policy actions; and an emphasis on the importance of outside actors providing modest amounts of targeted aid to help Africans manger immediate pressing problems as well. Several authors addressed the proper role for outside agencies, such as AFRICOM and USAID, and provide caveats similar to the thrust of Maxie McFarland’s cautionary concluding comments at the ISA panel; to wit, just because “the military is already doing a lot of nontraditional, human security type projects in Iraq and Afghanistan …and just because the Army [and other branches of the military] can do this type of activity, “doesn’t mean you want them to do it.”

"This is the first book to address a broad array of African environmental and human security issues ... The case studies expose the reader to past relevant research, while also identifying the main causes and consequences of different types of political conflicts fueled by human and environmental security problems. Each study also contains policy lessons, "best practices", or recommended future actions. The originality and comprehensiveness of each chapter means that the volume is likely to appeal to a wide range of readers for many years ... an important book for African Studies, economic development, environmental and earth science, environmental security, ecotourism, history, human security, international relations, national security and military science Collections." - Institute for Environmental Security

Helen Purkitt is professor of international relations at the U.S. Naval Academy. She holds a PhD from the University of Southern California and directed the international relations graduate studies program at Texas Tech University before joining the USNA faculty. Dr. Purkitt is editor of the Annual Edition: World Politics series, co-author of South Africa’s Weapons of Mass Destruction, and serves as an expert for 60 Minutes and other media forums. She has published dozens of peer-reviewed monographs and articles, including several on African environmental security.

Madelfia A. Abb is a retired U.S. army lieutenant colonel who served in tactical to strategic levels military intelligence organizations. She served as the chair of the Department of Military Science at Seton Hall University and is a 2008 recipient of the Ellis Island Medal of Honor. Her research focuses on the application of living systems, complexity, and chaos theories, and she has co-authored published chapters and monographs focused on a holistic understanding of human security crises in Africa.

John Ackerman is an assistant professor of national and international security studies at the U.S. Air Force’s Air Command and Staff College. He is currently investigating the intricacies of a climate action plan for the Department of Defense and the challenges and opportunities for Air Force assistance to AFRICOM and Africans.

Brent C. Bankus is a retired U.S. Army Lieutenant Colonel with a background in Armor, Cavalry, and Infantry branches. He currently works in the National Security Issues group of the U.S. Army War College.

Jennifer Bath is an assistant professor of cellular and molecular biology at Concordia College, Moorhead, MN. She is the director of research at the Concordia College Global Vaccine Institute (CCGVI), and her research focus is on neglected tropical helminth diseases.

Stephen F. Burgess is an associate professor at the U.S. Air War College. His recent work focuses on US-Africa policy and US-Africa command, as well as the role of air power in Africa. He also works on US-India Relations.

Kent Hughes Butts is professor of political-military strategy at the Center for Strategic Leadership, U.S. Army War College. Dr. Butts has served as a strategic analyst in the Strategic Studies Institute, U.S. Army War College and taught at the U.S. Military Academy. He has also been a John M. Olin Postdoctoral Fellow in National Security at the Center for International Affairs, Harvard University. Dr. Butts is the author of The Department of Defense Role in African Policy and coauthor of Geopolitics of Southern Africa: South Africa as Regional Superpower. He is a graduate of the U.S. Military Academy and holds an MBA from Boston University and an MA and PhD in geography from the University of Washington. He is also a graduate of the U.S. Army Command and General Staff College and the U.S. Army War College.

Mark Deets, USMC, History Department, U.S. Naval Academy is a U.S. Marine Major and a Foreign Area Officer for Sub-Saharan Africa in the U.S. Marine Corps. He served as the U.S. Marine and Defense Attaché to Senegal, the Gambia, Guinea-Bissau and Cape Verde from 2005-2007.

Elisabeth Feleke is regional program manager for West Africa at the Africa Center for Strategic Studies. She liaises and works with African regional organizations, military and civilian leaders as well as U.S bilateral missions in West Africa on regional security issues.

Dan Henk, a social anthropologist, is the director of the Air Force Culture and Language Center at the Air University and a retired army colonel. His military service included assignments in Asia, Europe, and accreditation as attaché to four African countries. His research ranges from defense budgeting and arms industries to emerging military roles and missions to human and environmental security. His most recent book is The Botswana Defense Force in the Struggle for an African Environment.

Laurel J. Hummel is a U.S. army colonel, an academy professor, and director of the geography program at West Point. She is the co-editor of Understanding Africa: A Geographical Perspective.

Cindy R. Jebb is a U.S. army colonel, professor, and deputy head in the Department of Social Science at the West Point. Her most recent book is The Fight for Legitimacy: Democracy Versus Terrorism, co-authored with P.H. Liotta, Thomas Sherlock, and Ruth Beitler.

Maxie McFarland is a career Defense Intelligence Senior Executive Service (DISES) professional currently serving as the Deputy Chief of Staff, Intelligence for US Army Training and Doctrine Command TRADOC- G2. As such, he supports the Army as the lead proponent for the Operational Environment and the resulting integration for Army training, experimentation, and concept development. He also oversees the Human Terrain System program, the University of Foreign Military & Cultural Studies, the Foreign Military Studies Office, and the Joint Training CIED Operations Integration Center (JTCOIC) in support of the Army and sister services training and operations.

Luis Rios is a U.S. air force lieutenant colonel, and assistant professor in the Department of Geography and Environmental Engineering at West Point. His most recent publication is a coauthored book chapter on environmental security about the Sahel region of Africa in Understanding Africa: A Geographic Perspective(2009).

Anthony Turton is a research associate at the Institute of Criminology at the University of Cape Town. He is a special operations veteran and still serves as an instructor at the South African National Defense College for their Executive National Security Program, (which is a course requirement for the promotion of Colonel to Brigadier General) that is offered to various military formations across the entire African continent.


Chapter 1: On the Margins: Insecurities in Niger and Chad (Colonel Cindy Jebb)

Chapter 2: Environment and Human Security in the Horn of Africa (Stephen F. Burgess)

Chapter 8: From Greed to Grievance: Natural Resources and Conflict in Africa (Elisabeth Feleke)

Chapter 11: Concluding Remarks about Environmental and Human Security and the Role of U.S. Military Forces in Africa in the Future (Colonel Maxie McFarland)