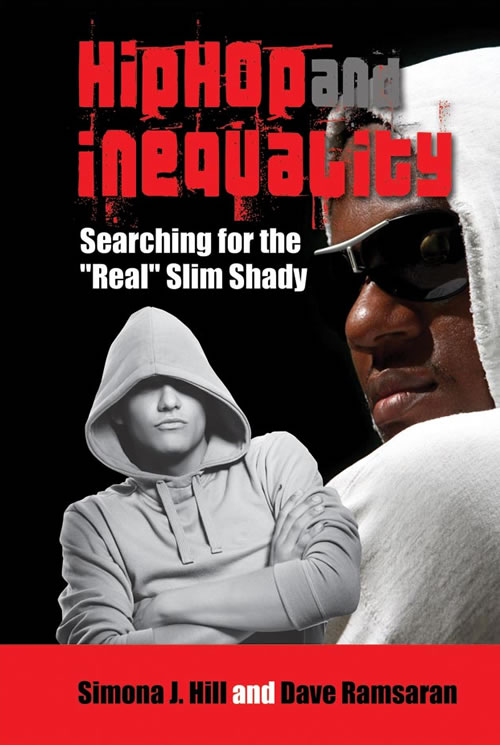 Hip Hop and Inequality: Searching for the "Real" Slim Shady by Simona Hill and Dave Ramsaran

Little work has been done on trying to locate the emergence of hip hop and hip hop culture within the context of capitalist development in the United States. This book shows how racial, gender, and ethnic stereotypes are reformulated through different media. The book critically analyzes two prominent archetypal images of the gangsta male and the wanksta feminist who can be either male or female.

Hip hop was developed by inner-city African-American youths in their struggles to deal with the negative consequences of their societal arrangements. The genre in its many cultural expressions is now a universal medium which serves to express more than the frustrated creativity of urban minority cultures from which it emerged. In the 21st century, hip hop has moved rapidly out of the crucible of the inner-city ghettos into the major boardrooms of corporate America. Hip hop is now used to market certain images and values that serve to reinforce the ideology of dominate groups in society.

When noted rapper Eminem commanded his audience’s attention in his 2000 megahit release “The Real Slim Shady” and queried in the lyrics, “Will the real Slim Shady please stand up?”, the authors took the question seriously and began to search for the “real slim shady” among the fabric of contemporary capitalism. The result of this research is this book, which explores how a dominant culture incorporates some dimensions of a subculture––in this case hip hop––and uses it to perpetuate dimensions of social stratification within a society. Essentially, this book critically examines how the values of a dominant culture and the controlling images it reproduces, impact issues of racial diversity, class distinctions, and gender stereotypes.

Authors Dave Ramsaran and Simona Hill are two sociologists who have sought to understand the contradictory nature of contemporary social phenomenon. Hip hop that is brought into the mainstream by contemporary media serves several purposes. First, it greatly enhances corporate profits. Second, it repackages old dimensions of inequality, including racial stereotyping and the sexist contempt for women. Third, the glorification of violence, the idealization of excessive consumption, and the promotion of hypersexual black masculinity serve to reinforce the privilege of dominant groups. Hip hop that challenges these stereotypes and cultural notions is pushed into the underground. The intent of the book is to uncover this process of moving from cultural questioning to cultural appropriation and reinforcement of structural inequality.

Despite the existence of other works on hip hop in fields such as ethnomusicology, anthropology, political science, communications studies and Black Studies, there is a dearth in the contributions from a sociological perspective. Studies have been done which look at the emergence of hip hop from its roots in the African-American community, as well as on the contributions of some of the major artists in the field. However, little work has been done on trying to locate the emergence of hip hop and hip hop culture within the context of capitalist development in the United States. The book shows how racial, gender, and ethnic stereotypes are reformulated through different media. The book critically analyzes two prominent archetypal images of the gangsta male and the wanksta feminist who can be either male or female. The analysis shows that hip hop outside of mainstream media has remained true to its radical traditions. Moreover, as hip hop has gone beyond the confines of the United States, that same radical tradition remains a key component in the hip hop diaspora and in hip hop’s cross-cultural expressions.

Hip Hop and Inequality: Searching for the "Real" Slim Shady is an important book for understanding how systems of inequality work and how they are perpetuated. It will be of immense value to professors and students in sociology, anthropology, political science, women’s studies, popular culture, and media studies. Written in an accessible language, it will also appeal to an audience outside academia and will certainly speak to those who may or may not realize that hip hop has a profound impact on modern society.

Simona Hill is a professor of sociology at Susquehanna University. She holds a BA, an MA, and a PhD from the University of Pennsylvania. As vice-president of the Mid-Atlantic Women’s Studies Association, she works to further the areas of feminist pedagogy, cultural ideology, and “wanksta” feminism. On the broadest level, her research interests span diversity, higher education, community organizations, and the hard work of incorporating an experience of social difference into the fabric of educational models. Her recent contributions include Teaching Feminist Activism, Entremundos/Among Worlds: New Perspectives on Gloria Anzaldúa, and Privilege and Prejudice: Twenty Years with the Invisible Knapsack.

Dave Ramsaran is an associate professor of sociology at Susquehanna University. He is a graduate of the University of the West Indies, St Augustine and American University, Washington, D C. He works in the area of race, class, gender and globalization both in the United States and the Caribbean. He has published articles in Race, Class and Gender, the Journal of Contemporary Sociology, and the Journal of Comparative Sociology. His work also appears in several edited anthologies.


Chapter 1: Introduction: The Power of the Beat

Chapter 5: In Search of the True Bards

Epilogue: The Future of the Beat