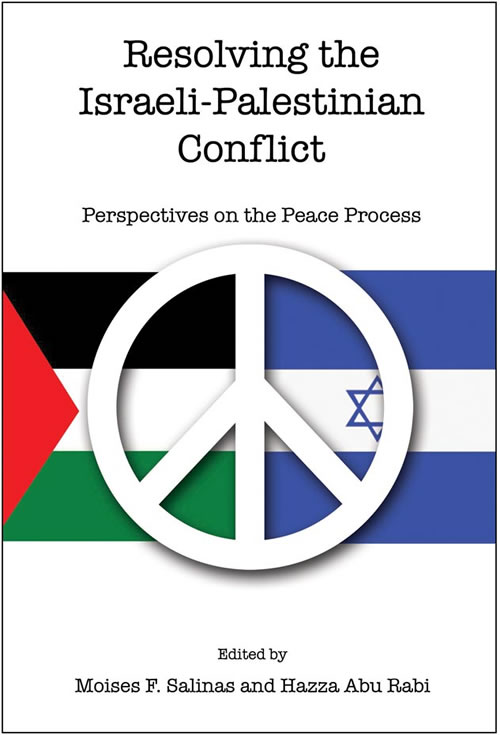 Resolving the Israeli-Palestinian Conflict: Perspectives on the Peace Process by Moises Salinas and Hazza Abu Rabi

With essays by the world's top academics (including Professor Herbert Kelman from Harvard University, Professor Naomi Chazan from Hebrew University of Jerusalem, and Dr. Sami Adwan from Bethlehem University), this volume makes a substantial contribution to scholarship on the Israeli-Palestinian conflict by its application of academic thinking to the solution for one of the most serious conflicts of our time.

In the past few decades, an apparent international consensus has developed regarding a two-state solution to the Israeli-Palestinian Conflict. However, in spite of this consensus and the fact that peace talks between Israelis and Palestinians have been ongoing in one way or another for over 17 years, peace has been elusive at best.

The frustration and the suffering of the people on both sides of the conflict have led many to believe that the two-state-solution consensus is, in fact, unattainable, and this has fueled the emergence of alternative solutions. On one end of the spectrum, there are those on the Israeli side that advocate the idea of conflict management, instead of conflict resolution. At the other end of the spectrum are those (mostly on the pro-Palestinian side) who champion the proposal of a single, bi-national state.

It was in this context that a group of academics from the U.S., Israel, and Palestine, gathered at a conference aptly titled “Pathways to Peace” in March 2008 to explore, discuss, and generate fresh, new ideas to bring forth an academic perspective of peace along with the aim of attaining justice and security for both the peoples of Palestine and Israel.

Essays arising from this meeting were written to note down these ideas from some of the most important researchers in this area, such as Professor Herbert Kelman from Harvard University, Professor Naomi Chazan from Hebrew University of Jerusalem, and Dr. Sami Adwan from Bethlehem University, as well as other renowned academics from a diverse variety of scholarly backgrounds.

This multidisciplinary perspective presents an academic and holistic method of examining and seeking out the elusive resolution to what is one of the longest conflict of the modern era.

This edited volume is a collection of essays based on the papers and keynote presentations that were delivered at this conference in a number of different academic disciplines, including political sciences, economics, psychology, philosophy, and literature. It is unique not only in its inclusion of authors from all sides and different political views but also in how it incorporates the various disciplines and theoretical perspectives in proposing and advocating varied solutions to the conflict.

This volume makes a substantial contribution to scholarship on the Israeli-Palestinian conflict by its application of academic thinking to the solution for one of the most serious conflicts of our time.

Dr. Moises Salinas is chief diversity officer and associate professor of psychology at Central Connecticut State University. His research focuses on the effects of stereotypes and education. He is a native of Mexico, and he has completed degrees in Israel, Mexico, and the U.S. He received hisPhD in educational psychology from the University of Texas at Austin. His first book, The Politics of Stereotype: Affirmative Action and Psychology was published in 2003. His most recent book is Planting Hatred, Sowing Pain: The psychology of the Israeli-Palestinian Conflict. Other previous book publications include collaborations with Dr. Richard Valencia for Chicano School Failure and Success and Intelligence Testing and Minority Students, and with Dr. Elliot Aronson for his book, Readings About the Social Animal.

Mr. Hazza Abu Rabi is an adjunct professor of Islamic studies and Arabic at Connecticut College and the University of Hartford. He is a former Fellow of Institute of Zionism and Israel Studies at Brandies University. He holds an MA in Christian-Muslim relationships from Hartford Seminary, and an MA in Judaic Studies from the University of Connecticut. He has presented papers on a variety of topics regarding Arabs in Israel, including Islamic movement within the green line in Israel. Recently, he published the Jerusalem in the 19th Century with the Greenberg Center for Judaic Studies at the University of Hartford.


Chapter 3: The Prospects for a Two-State Solution Between the Israelis and Palestinians Given the Current Situation in Gaza (Andrew Winnick)


Chapter 5: Israeli and Palestinian Peacemakers: Can They Talk the Talk? (Eric N. Budd)


Chapter 7: True Peace Based on Human Rights Versus the Endless “Peace Process” Based on Lies (Mazin Qumsiyeh)


Chapter 11: Constructing the Myth of Egyptian-Israeli Brotherhood: Ali Salem’s Drive to Israel, the Biblical Exodus, and the Problems of Peace (Daniel Levine)


Chapter 12: When Israel and the Arabs Were Allies (Peter Feinman)


Chapter 13: Listening to the Other/Inaudible: Levinas and Reconciliation in Israel/Palestine (Sarah L. MacMillen)