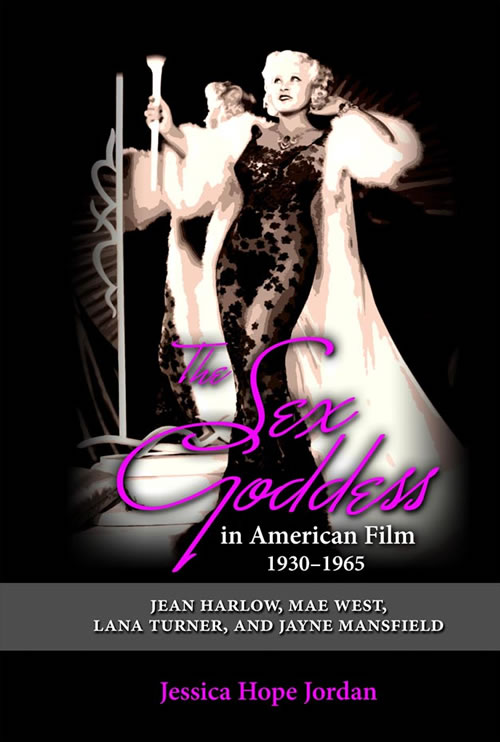 "Lavishly illustrated ... Jordan's lively discussion of the commodification of the female body in the service of the classic Hollywood star system will offer less experienced readers genuine insights into the way the system worked and how these women manipulated it to their advantage... Recommended. Lower- and upper-division undergraduates; general readers." - CHOICE

The sex goddess’s seemingly endless power to influence and fascinate, to achieve in a sense her own self-reproduction through many decades of “re-makeovers” reveals her positioning in American culture as not only a lasting image but also as a potentially powerful and subversive force. The sex goddess is often thought by feminist film theorists to be little more than a projection of the male imaginary. However, this book makes a necessary correction to this trend by demonstrating how the actresses performing the role of sex goddess in fact use the feminine imaginary to create their own agency. Through their performance of “hyper” femininity, and with their seductive power, they exert control not only over their filmic narrative “targets of seduction” but their viewers as well.

The ability to hold their objects of seduction in such thrall suggests that the image of the sex goddess possesses a power far more subversive than what has been previously explored; in fact, to date there has not yet been a critical study of the sex goddess in film. Cinema becomes a place where the sex goddess’s designation as sex itself can further suggest her bodily signification as a whole discourse on sex outside of her cinematic representation, thus loading her body to be read almost entirely in terms of sex and its corresponding contemporary social thought. During the period of Classical Hollywood Cinema, the construct of the sex goddess warrants especial attention because of what this study can reveal in broad terms about cultural ideas of feminine sexuality, American cinema, and visual culture.

In the first critical study of the sex goddess in film, Jessica Hope Jordan illustrates how Jean Harlow uses her sexualized body to “affect” and seduce viewers away from any primary identification with those characters and their plotlines that are supposed to lead the film, to identifying instead with the kind of sexual empowerment and self-possession her characters consistently display. Linking the idea of sexual empowerment to the filmic and public celebration of hyper-feminine sexuality, the book additionally covers previous feminist discussions of Mae West’s performances as “feminist camp” to argue that West sought to both celebrate and embody for women viewers what she viewed as cultural ideals of femininity and women’s sexuality. With Lana Turner and the “cinematic code,” the book considers the many problems inherent in both the filmic and public celebration of hyper-feminine sexuality in relation to censorship and considers the effects of the Hays Code on hyper-feminine sexuality as depicted in film noir. The book also importantly presents the first critical discussion of the actress Jayne Mansfield, suggesting that her 1950s open acceptance, celebration, and public promotion of her feminine sexuality, both onscreen and off, makes her not only a precursor of the more sexually liberated 60s, but also, like the other actresses discussed here, a kind of prescient performance artist, even theorist, of feminine sexuality in particular, and cultural ideas about sexuality more generally. Beyond recouping her image as feminist, the book demonstrates how the kind of desire aroused by the sex goddess, a desire which remains endlessly suspended, works as a supreme example of the aesthetic apparatus of cinema itself.

The Sex Goddess in American Film, 1930–1965, is an important book for inclusion in all film, film history, film theory, gender and sexuality studies, women’s studies, and American studies collections.

"Jessica Hope Jordan's The Sex Goddess in American Film 1930–1965 makes unique contributions to popular film studies. Other pluses for scholars are a very complete bibliography and an extensive listing of biographies and filmographies directly on the subject of sexy Hollywood women. ... This will be a model for other books on similar subjects." - The Journal of Popular Culture

"Lavishly illustrated ... Jordan's lively discussion of the commodification of the female body in the service of the classic Hollywood star system will offer less experienced readers genuine insights into the way the system worked and how these women manipulated it to their advantage... Recommended. Lower- and upper-division undergraduates; general readers." - CHOICE


Introduction: Sex and the Goddess

Chapter 1: Sex as Cinematic Capital: Jean Harlow and the Economy of the Gold Digger

Chapter 3: Sex as Cinematic Code: Lana Turner’s Star Text and the Duplicity of the Femme Fatale