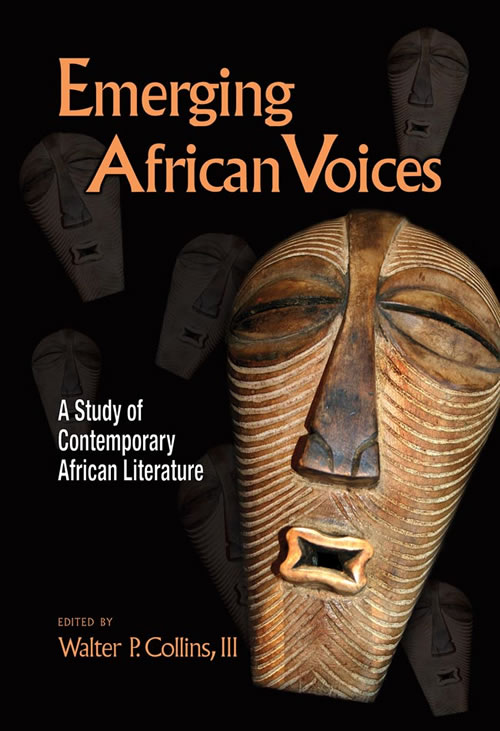 There exists an abundance of deft scholarship and critical analyses, even in the most recent publications by African and Western theorists, of the works of recognized African authors. This volume offers insightful general analysis and critical evaluation of new writers’ works in order to showcase their contributions to the body of African literature. It examines nine contemporary writers whose works (written almost entirely in the colonial languages of English and French) in some way update and refocus African literature for the new century.

Emerging African Voices is an excellent compendium of literary scholarship offering an assessment of the literary endeavors of the latest generation of select African writers. There exists an abundance of deft scholarship and critical analyses, even in the most recent publications by African and Western theorists, of the works of recognized African authors. However, it is sometimes difficult to access a variety of criticism for some more recent writers, those born just before, at, or just after the independence of many African nations. It seems that either almost all of the recent monographs continue to focus almost entirely on the well-established writers or they focus on one newer writer exclusively.

This volume offers insightful general analysis and critical evaluation of new writers’ works in order to showcase their contributions to the body of African literature. It examines nine contemporary writers whose works (written almost entirely in the colonial languages of English and French) in some way update and refocus African literature for the new century. The writers whose works are under discussion tackle some of the long-standing difficulties of the colonial project—assimilation, Manicheanism, and othering—in new ways while exposing the challenges and dysfunctions of a locale affected by globalization.

During the last 60 years, African literature has been dynamically shaped by African history, especially the colonial exploits of Western nations. A clear and irrefutable raison d’être for this volume is to probe the aims and intentions of these new voices. Seven chapters are devoted to writers of Nigerian descent with the balance dedicated to writers from Senegal and South Africa.

Because of the multiplicity of experiences in their geographic locations in Africa and across the Diaspora as well as their encounters and capabilities related to their place in the contemporary world, these writers continue to break new ground in African literature. Their work reflects the times and places where they live and interact, and it is for this reason that their work will permanently occupy at key place in the evolution of African literature here at the beginning of a new century almost fifty years after independence.

"This volume of critical essays uncovers vast reserves of creative talent in the new wave of African writing produced during the first decade of the twenty-first century by a group of young, well-educated, and globally literate men and women, such as Chimamanda Adichie, Chris Abani, Helon Abila, Fatou Diome, Helen Oyeyemi, and Phaswane Mpe...Collectively, the essays in this book capture the exciting energy of the emergent writing in rigorous analyses of selected texts, drawing on historical, comparative, and theoretical insights to provide a fresh perspective demanded by the new literature. The volume opens up a realm of artistry that illuminates the recurring and changing aspects of African life in a globally connected world at the dawn of a new century." - Tuzyline Jita Allan,Professor of English, Baruch College

R. Victoria Arana is professor of English at Howard University, where she teaches contemporary British literature including ‘black’ British writers, postcolonial theory, and advanced writing courses. She is a graduate of Vassar College, Princeton, and the George Washington University. Her most recent publications include Black Travel Writing (2004), Black British Writing (2004, pbk. 2009), ‘Black’ British Aesthetics Today (2007), World Poetry from 1900 to the Present (2008), and W. H. Auden’s Poetry: Mythos, Theory and Practice (2009). She served as a judge for the 2005 Caine Prize for African Literature (U.K.). She has written extensively for and edited the Dictionary of Literary Biography’s (Vol. 347) Twenty-First-Century ‘Black’ British Writers (2009) and is a Fellow of the Royal Society for the Arts.

David Cockley is a lecturer in contemporary literature at the University of California, Los Angeles. He completed his PhD at Texas A&M University and is currently working on a book focusing on literary responses to transnational terrorism.

Katherine Farley Galvagni is a recent graduate of the French Department at the Graduate Center of The City University of New York where she received her PhD. She earned her MA from Wake Forest University and her BA from The College of Charleston. Dr. Galvagni is the author of The Use of African and Caribbean Francophone Literature to Teach Culture.

Veronica C. Hendrick is an assistant professor of English at John Jay College of Criminal Justice (CUNY). Her work primarily focuses upon contemporary writers, with a special emphasis on the intersection of literature and kaw. She has written and presented on the Native American experience, indentured servitude, and slavery and the law in modern American novels. Her book, Servants, Slaves, and Savages: Reflections of Law in American Literature, is forthcoming from Carolina Academic Press.

Timothy Johns is an assistant professor of world literature and film at Murray State University. He received his PhD from Stony Brook University (SUNY), an MA from San Francisco State, and a BA from Oberlin College. His work has recently appeared in the Journal of the African Literature Association, Atlanikos, and the Dictionary of Nineteenth-Century Journalism. “The Price of Pleasure,” an essay on sex and economics in the contemporary South African novel, is forthcoming as a chapter in Masculinities in African Literary and Cultural Texts.

Dik Okoro, PhD, University of Wisconsin-Milwaukee, is the author of two collections of poetry, including Dance of the Heart, and the editor of three anthologies, most recently Speaking for the Generation: Contemporary Short Stories from Africa (forthcoming Africa World Press, 2009). Dr. Okoro received his MA and MFA degrees from Chicago State University, and his BA from the University of Wisconsin-Parkside. He is a professor of English at Olive-Harvey College, Chicago.

Akinola Oriola was a research fellow in the Department of African-American Studies at Syracuse University. He earned his PhD, MA, and BA from University of Ibadan, Ibadan-Nigeria. Dr. Oriola has authored and co-authored three books read by thousands of people across the globe and many scholarly publications in journals of his area of studies including in the Journal of African Literature.

Alexandra Schultheis is associate professor of postcolonial literatures and theory at the University of North Carolina Greensboro. She is the author of Regenerative Fictions: Postcolonialism, Psychoanalysis, and the Nation as Family (2004) as well as essays in Twentieth Century Literature, Jouvert, Genders, Feminist Teacher, The Peace Review, South Asian Review, and several edited collections. Her current projects include two coedited volumes, with Elizabeth Swanson Goldberg, on human rights and literature (theoretical and pedagogical perspectives) and a monograph on 'Transcultural Tibet' in contemporary literature and culture.

Pauline Ada Uwakweh is an assistant professor of literature at North Carolina Agricultural & Technical State University. She received her PhD from Temple University, Philadelphia, MA from University of Calabar, Nigeria, and her BA from University of Port Harcourt, Nigeria. Dr. Uwakweh has published articles on African women writers. Some of her work appears in Research in African Literatures, African Literature Today, Emerging Perspectives on Buchi Emecheta, and Emerging Perspectives on Ama Ata Aidoo.


Chapter 2: “Breaking Gods”: The Narrator as Revelator and Critic of the Postcolonial Condition in Purple Hibiscus (Pauline Ada Uwakweh)


Chapter 6: The Novel Architecture of Phaswane Mpe’s Welcome to Our Hillbrow (Timothy Johns)


Chapter 7: The Allegory of Self and Other in Soyinka’s The Lion and The Jewel and Kunle Okesipe’s Professor’s Last Death (Akinola Oriola)


Chapter 8: Ogaga Ifowodo and the Oral Tradition: An Analysis of Form and Socio-political Issues in Madiba (Dik Okoro)