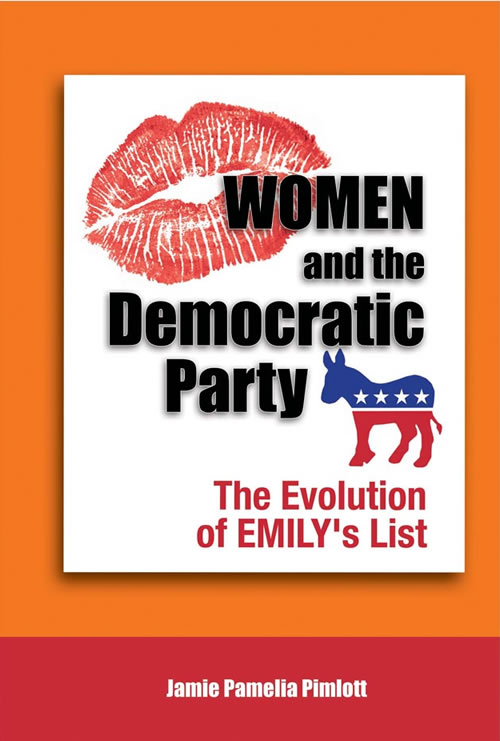 Women and the Democratic Party: The Evolution of EMILY's List by Jamie Pamelia Pimlott

This study is the first examination of the growth and transformation of EMILY’s List from its inception in 1985 through the 2008 election cycle. Relying on interviews with organization staff, founding members, and members of Congress, it illuminates the ways in which the organization’s origin and mission are firmly rooted in the goals and activities of the liberal feminist women’s movement of the 1970s.

Formed in 1985 as a political action committee (PAC) to provide select female Democratic candidates with “seed” money to run for federal office, today EMILY’s List is much more than a women’s PAC. Over the past twenty-five years, a political entrepreneur—Ellen Malcolm, a cadre of liberal feminist activists, and thousands of liberal feminist women and men have transformed EMILY’s List into a multi-pronged influence organization that has changed the face of U.S. Congress and the American political landscape.

In 2008 EMILY’s List brought in over $34 million from more than 10,000 large donors and an untold number of small donors; for the first time the Center for Responsive Politics placed EMILY’s List on their list of “heavy hitters.” The president and founder of EMILY’s List, Ellen Malcolm, is considered one of the top Democratic strategists in the country. But scholars, especially those outside of women and politics, continue to view EMILY’s List as simply a women’s PAC, albeit an important one. While acknowledging that it has been a force in making women competitive in the early stages of congressional campaigns and its bundling prowess, there has been little if any attempt to place EMILY’s List within the broader literature of campaign finance or congressional elections. While bundling may have put ELIST on the map in the late 1980s, in 2008 bundling was but one tool in EMILY’s List’s arsenal.

Over the past quarter of a century, EMILY’s List transformed from a women’s PAC/donor network to a multi-pronged influence organization that strategically uses its resources to aid pro-choice Democratic women in their quest for public office. EMILY’s List has created and maximized on political opportunities in such a way that it now stands as a political powerhouse. Those who have underestimated it as a narrow women’s organization, have also largely underestimated the important role EMILY’s List played in helping transform the character of the Democratic Party in Congress and helping bring about the Party’s dramatic resurgence to power.

This book would be appropriate for a variety of courses including courses on women and politics, Congress and congressional elections, campaign and elections courses, parties and interest group courses, and campaign finance courses. This book will be accessible and appropriate for undergraduates and graduate students, as well as researchers and practitioners. It combines historical narrative, which makes it accessible to students, with original interviews and empirical analysis, which appeals to faculty wishing to introduce students to cutting edge research efforts in political science.

“The book’s descriptive narrative is essential for students of US politics today. Recommended. All readership levels. – CHOICE

Jamie Pamelia Pimlott is an assistant professor at Niagara University in Niagara Falls, New York. Prior to her position at Niagara University, Dr. Pimlott was a research analyst at the Campaign Finance Institute in Washington, D.C. She holds a PhD from the University of Florida, where she also obtained an MA and BA in history. She teaches courses on women and politics, Congress, and campaigns and elections. Her passion for politics comes through in her writing and in the classroom; in 2009 she received the College of Arts & Sciences’ award for Excellence in Teaching.

Chapter 4: Members and Their Organizational Roles

Chapter 5: Candidates and the Organization