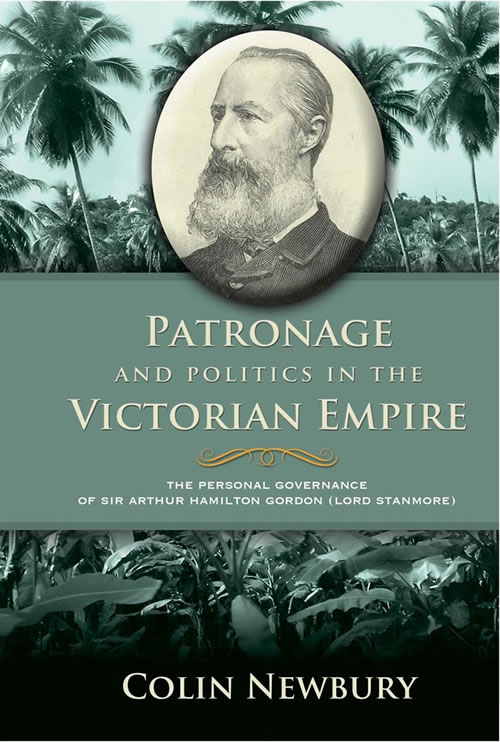 Patronage and Politics in the Victorian Empire: The Personal Governance of Sir Arthur Hamilton Gordon (Lord Stanmore) by Colin Newbury

“This rigorously scholarly volume by a doyen of imperial history, Colin Newbury … ultimately gives us a powerfully persuasive revisionist interpretation … he dissolves key mythologies … With almost forensic scholarly analysis, Newbury explodes every one of these ‘myths’ … Colin Newbury further establishes his distinctive contribution to imperial history.” – Journal of Pacific History

This study of an icon in imperial historiography is both innovative and revisionist. It treats the life of a man whose career covered six dependencies at different stages of political development as a case study in imperial clientage in ways that challenge the stereotypes of “despotic” power in the Victorian colonies. By exploring the political relations between Sir Arthur Hamilton Gordon, his superiors, his officials and the leaders of local hierarchies, it confirms the application of patron-client theory to this field of history, and it presents a better explanation for success or failure than “direct” or “indirect rule” or exercise of “hegemonic” power. Accordingly, simple “autocratic” labels applied to this archetypal Victorian governor are revised. Like other administrators selected for high office in the early nineteenth century, Gordon was born into a British patronage system; he advanced his career by means of it; and he applied it by his cultivation of “instrumental friendships” within bureaucratic hierarchies and among chiefs and notables of societies familiar with clientage politics. It is not, therefore, another imperial hagiography, but confirmation of the arguments and ideas contained in the author’s very favourably received Patrons, Clients, & Empire: Chieftaincy and Over-rule in Asia, Africa, and the Pacific (2003). At the same time, this reinterpretation enlarges on that study by focusing in a more nuanced way on the difficulties a patron governor encountered in two emerging dominions with responsible government and the reasons for his qualified success in his crown colony posts.

This innovative approach is based primarily on Gordon’s abundant private papers, colonial office patronage files, territorial files, and colonial office lists of appointments and promotions in the crown colonies he governed. By digging deeper and using these neglected tools, his personal network of friends and allies can be reconstructed and its utility for his administrative purposes and his career advancement assessed. Moreover, since the 1960s, there has been a steady output of country histories using local records as well as metropolitan sources and providing a better contextual background to Gordon’s work. This is especially true for crown colonies in the West Indies and the Indian Ocean in the aftermath of slave emancipation, where Gordon encountered planter opposition to reform of immigrant indenture. It is no less true for Fiji and Ceylon (Sri Lanka) where there is a particular need to reassess the work of a man who is held responsible, in the first case, for creating an administrative system that entrenched indigenous political and economic rights at the expense of Indian settlers, and in the second for holding his civil service in contempt and favouring the leaders of one indigenous caste at the expense of others. For New Brunswick and New Zealand, too, there are strong reasons for revising earlier judgements concerning his role in applying imperial policy in the period before Canadian confederation or for exceeding his constitutional role in investigating Maori land issues.

From this revision Gordon emerges, not as an imperial despot, but as a man who sought to apply his own style of personal governance for policies he believed in. He will remain a controversial figure well worth understanding for the light his career sheds on the ways in which colonial government worked as historians continue to come to terms with the politics of European imperialism that shaped much of the modern world. With few exceptions there are no comparable books dealing with crown colony governorships in this manner.

The intended academic readership, therefore, includes political scientists and anthropologists with an interest in patron-client relations, as well as students and historians familiar with the controversies surrounding imperial studies and the emergence of new states.

“This rigorously scholarly volume by a doyen of imperial history, Colin Newbury … ultimately gives us a powerfully persuasive revisionist interpretation … he dissolves three of the key mythologies surrounding Gordon … With almost forensic scholarly analysis, Newbury explodes every one of these ‘myths’ … With this detailed case study, Colin Newbury further establishes his distinctive contribution to imperial history over the course of 50 years.” – Journal of Pacific History


Introduction: A Product of Patronage

Chapter 7: A Career Extended: Action and Influence from Retirement