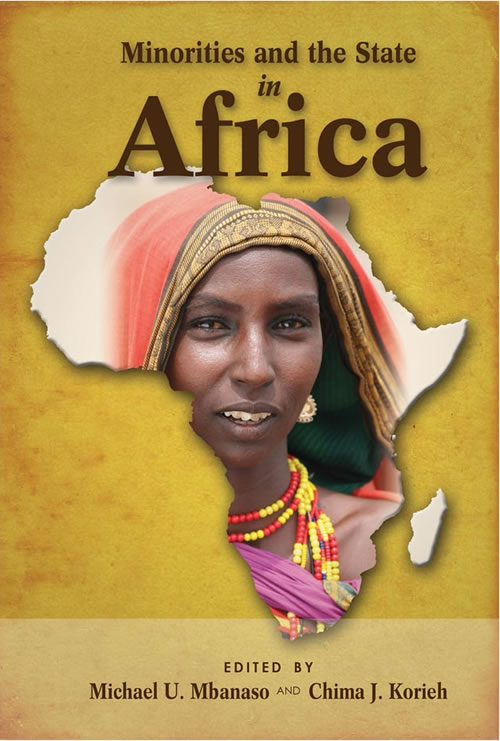 Minorities and the State in Africa by Michael U. Mbanaso and Chima J. Korieh

This book explores the various facets of the relationship between minorities and the state across Africa. The motivation for this collection lies in the growing need to understand the often tenuous relationship between minorities and the state. Through this collection, the editors and contributors present thoughtful ways for understanding forms of hegemony imposed by dominant groups in relational, national, and regional experiences.

Most states in African––as in other parts of the world––have one or more minority groups, which include people who belong to national, ethnic, religious, or linguistic minority groups. The issues of land, economic, and cultural globalization alongside the increasing tendency toward homogeneity amongst the dominant populations are emblematic of the treatment of minorities in many states. The tendency for the dominant population to marginalize minorities within their national boundaries has frequently led to conflict and strife. Minority groups and indigenous people often face discrimination and human rights abuses with little effective protection from the law. The emergence of nations and nation-state after over half a century of colonial control by European nations brought the issue of rights to national self-determination to the fore and sharpened the human rights problems of minority groups. The development policies pursued by states often paid little attention to the rights of minorities and indigenous peoples. Often perceived as hegemonic, minorities have responded to the policies formulated by the dominant groups often with little success for achieving inclusion. In some cases, counter hegemonic reactions and responses have led to conflicts and further suppression of minority rights.

This book explores the various facets of the relationship between minorities and the state across Africa. The motivation for this collection lies in the growing need to understand the often tenuous relationship between minorities and the state. Through this collection, the editors and contributors present thoughtful ways for understanding forms of hegemony imposed by dominant groups in relational, national, and regional experiences. The book offers alternative conceptual and theoretical approaches and alternative research strategies for dealing with minority/majority issues, as well as resource control in historical and contemporary perspectives. This interdisciplinary framework draws into dialogue critical theories in the humanities and social sciences and brings together the discourses of scholars, policy makers, and activists whose experiences have led them to face forms of hegemonic control within the state. The relevance of minorities in state structures, issues of identity, human rights, and race as broadly conceived concepts, would serve well in informing new theories in this era of globalization.

This volume consists of a set of nested themes that present minorities issues as fluid, contested, and under continues transformation, especially when examined within the larger context of a globalized human right agenda. The collection focuses on minority issues in contemporary Africa from a historical perspective, but also links these issues to global movements (such as international human rights) in an innovative manner. This book employs a cross-regional approach to explore specific issues in minority-state relations and human rights. This unprecedented approach holds the potential of serving as a foundation study for future research that seek to employ a comparative approach to specific issues in minority and human rights studies.

Minorities and the State in Africa is an important book for all interested in the study of ethnic, minority, and human rights issues in Africa. Furthermore, the international appeal of the subjects treated in Minorities and the State in Africa cannot be doubted. This book is also timely considering the fast-growing importance of human rights and minority issues in the academic world.

Michael U. Mbanaso is an associate professor and Director of the E. Franklin Frazier Center for Social Work Research at Howard University. He holds a PhD from Portland State University, an MA from Stephen F. Austin State University, and a BA from the University of Southwestern Louisiana. Dr. Mbanaso’s areas of research interests include, globalization and migration, aging, health research; poverty and social policy, human rights and migration, and socio-economic development in the developing world. He has recently published in the Journal of Gerontological Social Work.


Introduction: African Mosaic: The Dilemmas of a Multiple Society (Chima J. Korieh and Michael U. Mbanaso)

Chapter 2: Between Belonging and Alienation: The Indian Minority in South Africa (Edward Ramsamy)

Chapter 3: The Failure of Transformative Minority Politics in Algeria: The Kabyli Citizens’ Movement and the State (Jacob Mundy)

Chapter 4: A Tale of Two Minorities: The State of the Gaboye and Bantu Communities of Somalia (Mohamed A. Eno and Omar A. Eno)