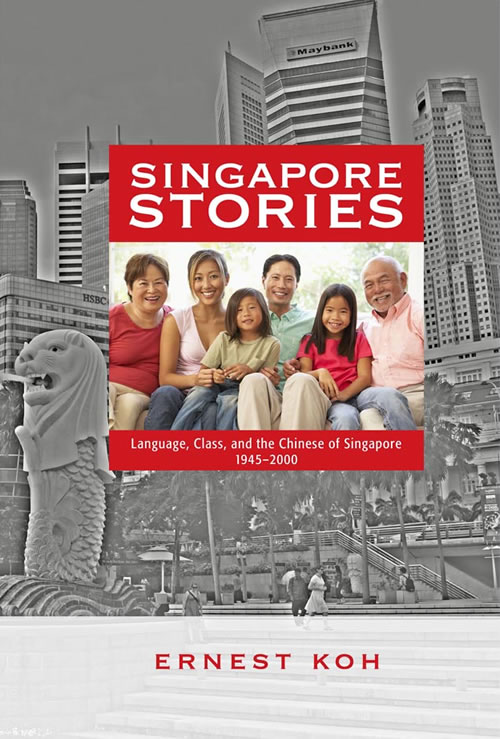 Singapore Stories: Language, Class, and the Chinese of Singapore, 1945–2000 by Ernest Koh

“Successfully critiques the unity of what Koh calls the ‘English Singapore Story’ … works best in unraveling the plurality of experiences … engages a number of important questions for writing recent Singapore history … there is much good material in this book which offers the possibility of a more richly textured social history seen from the inside out.” – Journal of Southeast Asian Studies

Taking on the perspective of ordinary Chinese Singaporeans, this book bridges a considerable gap in the existing literature by providing a historical account that surveys the experiences of everyday life in Singapore through reminiscences provided by the citizenry. In doing so, it presents an account that more accurately reflects the nation’s nuanced past through defining eras in Singapore’s post-war history.

The history of Singapore has been widely conflated with the history of its economic success. From its heyday as a nexus of trade during the imperial era to the modern city state that boasts high living standards for most of its citizens, the history of Singapore is commonly viewed through the lens of the ruling elite. Published in two volumes in 1998 and 2000, Lee Kuan Yew’s memoirs The Singapore Story epitomizes this top-down definitive narrative of the nation’s past. The history of post-war Singapore has largely been reduced to a series of decisions made by the nation’s leaders. Few existing studies explore the role and experiences of the ordinary person in Singapore’s post-war history. There are none that do this through ethnography, oral history, and collective biography.

In a critical study that has no parallel among existing works on Singapore history, this book dispenses with the homogenous historical experience that is commonly presumed in the writing of Singapore’s national past after 1945 and explores how the enforcement of a uniform language policy by the Singapore government for cultural and economic purposes has created underappreciated social and economic divides among the Chinese of Singapore both between and within families.

It also demonstrates how mapping distinct economic, linguistic, and cultural cleavages within Singaporean Chinese society can add new and critical dimensions to understanding the nation’s past and present. Chief among these, the author argues, are the processes behind the creation and entrenchment of class structures in the city state, such as the increasing value of English as a form of opportunity-generating capital.

The author also makes an important contribution to the practice of oral history in Asia. By employing a life story approach and presenting the lives of ordinary citizens in narrative, Ernest Koh shows how the history of the household can be employed as a collective counterpoint to Statist discourse. The study shows how a nuanced exploration of the ordinary person’s experience both as an individual and as part of a collective reinvests the element of historical agency to the citizenry.

By employing Singapore as a case study, this book also looks to investigate a full range of highly topical issues that have been introduced in urban Asia through the process of industrialization, such as the increasingly visible manifestations of socioeconomic inequality.

Singapore Stories is an important book for all modern Southeast Asia and Asian oral history collections.

“Successfully critiques the unity of what Koh calls the ‘English Singapore Story’ … works best in unraveling the plurality of experiences … engages a number of important questions for writing recent Singapore history … there is much good material in this book which offers the possibility of a more richly textured social history seen from the inside out.” – Journal of Southeast Asian Studies

Ernest Koh is a lecturer in history and international studies in the School of Historical Studies at Monash University. He received his BA (Hons) and PhD from The University of Western Australia. Dr. Koh has published works in Southeast Asian Studies and History Compass, and he has also contributed articles to a number of edited collections.


Chapter 1: The Historian and the Singapore Story

Chapter 4: The Non-English-Literate Chinese Students, Caricature, and the Creation Story

Chapter 5: Into the ‘Economic Miracle’

Chapter 6: Singapore’s Factories and the Economics of Language

Chapter 7: The Price of a Miracle