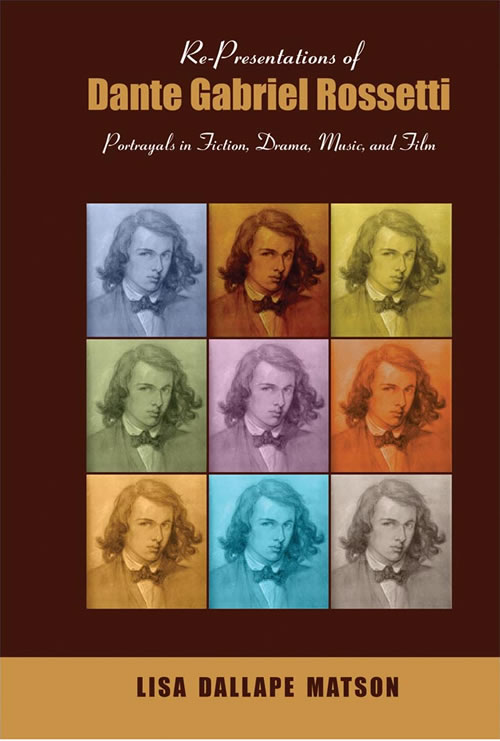 This book examines the treatment of Dante Gabriel Rossetti and his work in twentieth and twenty-first century fiction, drama, music, and film, specifically since 1950. The author strives to clarify the many Dante Gabriel Rossettis, using thirteen of the thirty easily identifiable roles in this system of representation which the author has identified herself—roles by which Rossetti is described and portrayed. This book is an important book for all British literature and art collections.

Dante Gabriel Rossetti (1828–1882) was one of the most complex poets and painters of the Victorian period. In the 128 years since his death, at least 30 biographies and critical studies––along with hundred of articles on his life, poetry and art, and separate volumes of his correspondence––have appeared. There has been continuous interest in Rossetti, but no true understanding of where he stands in the pantheon of literature; whether he is primarily a painter, a poet, or both; and why his life tends to overshadows his work.

This work was prompted in part by Lisa Tinker’s statement, “Each ages get—or makes—the Rossetti it desires.” It is a meta-biography that examines the central question: who are the Rossettis created by the values, obsessions, desires and anxieties of a period? It asserts that, more important than establishing some particular truth about the poet-painter, such an approach can provide a proper understanding of his life and work, it can place him more clearly and correctly into the ever-evolving interpretive schema, and it can shed some light on why Rossetti’s work is most often eclipsed by his life. How are the Rossetti stories and legends represented in the different genres; why have the these genres been chosen; and why is he represented at all? These are the questions of this study. Twentieth- and twenty-first century representations of Rossetti himself as a man and artist or of his work have, to this point, remained unexamined. This omission is significant because, although the representations of Rossetti are plentiful and have continued to be created to the present time, they have continued to draw attention away from his work, and there is as yet little integration of the man with his work as both painter and poet. Moreover, there are several different representations of Rossetti, often in stark contrast to each. Rossetti scholarship has not yet attempted this.

This book examines the treatment of Dante Gabriel Rossetti and his work in twentieth and twenty-first century fiction, drama, music, and film, specifically since 1950. The author uses these genres to examine how text, music, performance, and visual images work as a system of representation. In this book, the author strives to clarify the many Dante Gabriel Rossettis, using thirteen of the thirty easily identifiable roles in this system of representation which the author has identified herself—roles by which Rossetti is described and portrayed. The identified portrayals of Rossetti fall easily into five groupings: first, the Italian-English man who is a brother and a loyal friend; second, the poet who is a painter and co-founder of an art movement which afforded him the chance to be a mentor; third, the lover, seducer, husband, oppressor; fourth, the murderer; and fifth, the tortured artist and addict who was mentally ill. These are the portrayals are used throughout this work. Several have chronological boundaries and are discrete representations while others reoccur across the time period covered. Using these categories, the author examines seven works of prose fiction, a feature-length film, two television series, a stage play, and the songs and lyrics of a contemporary band.

Re-Presentations of Dante Gabriel Rossetti is an important book for all British literature and art collections.

"This comprehensive book provides much information … Drawing on twenty-five years of extensive Rossetti scholarship, Matson leaves no stone unturned … she weaves in and out of Rossetti’s biography, never missing a beat, dissecting the turbulence responsible for his artistic achievements … this is the first study that explores his contemporary media legacy … Who, in fact, is the real Dante Gabriel Rossetti? This book tells all.” – Film & History

Lisa Dallape Matson is an instructor of liberal arts and a professional academic advisor at Pennsylvania Highlands Community College. She holds a PhD from Indiana University of Pennsylvania and an MLS and BA from the University of Pittsburgh. Dr. Matson has also published articles in Online, The South Carolina Review, and the Review of the Pre-Raphaelite Society.

Poems Written as Memorials to Rossetti

Images of Rossetti in the Early Twentieth Century

Victorian Love Story: A Study of Victorian Romantics Based on the Life of Dante Gabriel Rossetti

The Golden Veil: A Novel Based on the Life of Elizabeth Siddal

Clever as Paint: The Rossettis in Love

Chapter 6: The Rossettis in the Twenty-First Century

“Softly Elizabeth,” From This is Where We Disappear